The exact date is impossible to confirm. But it is widely accepted that Bob Dylan arrived in New York City on 24 January 1961, in the midst of the coldest winter New York had seen in 28 years. He’d dropped out of the University of Minnesota, and spent the last twenty-four hours driving east with Fred Underhill and two others. Just a few hours after slamming the car door shut, Dylan was walking into Café Wha?, at 115 MacDougal Street. Fred Neil, the club’s MC, found out that he was a musician, and asked him to play something. It was his New York City debut.

He continued to play with Neil, who is now better known for writing ‘Everybody’s Talking,’ which was featured in the film ‘Midnight Cowboy.’ Paul Clayton and Dave van Ronk were also playing at Café Wha? at the time. So was Noel Paul Stookey, who had come to the Village in 1959, as well as Peter Yarrow.

Mary Travers had been born in Kentucky, but her family had moved to Greenwich Village when she was about three years old. She attended Elizabeth Irwin High School, where her musical director introduced her to Pete Seeger. As an adult, she moved to Macdougal Street, and hung out with the Clancy Brothers at the White Horse Tavern (567 Hudson Street). She, Yarrow, and Stookey performed together as Peter, Paul, and Mary, for the first time at the Bitter End in 1961. 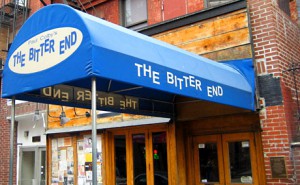 Gerde’s Folk City, at 11 West 4th Street, was another popular performance space and hangout. Carolyn Hester and Logan English were the first two folk musicians to perform there, in June of 1960. English was MC at the venue, working alongside Charlie Rothschild, who would become Judy Collins’ manager. The Weavers (including Pete Seeger and Woody Guthrie), Sonny Terry, Brownie McGhee, Joni Mitchell, Judy Collins, Loudon Wainwright III, and Rev. Gary Davis all played there. Bob Dylan had his first professional gig here on April 11, 1961, supporting Blues great John Lee Hooker. He also got his first major break here, when his performance was reviewed in the New York Times. This is also where he first played ‘Blowin’ in the Wind,’ and met Joan Baez. She was quickly rising in popularity at the time, becoming known as the ‘Queen of Folk,’ and he was apparently eager to impress her. She would launch his career, inviting him to play with her on stage, and scolding fans who found his voice bothersome.

In 1963, a duo calling themselves ‘Kane & Garr’ began playing at Gerde’s Folk City on Monday nights. One evening, with Columbia producer Tom Wilson in the audience, they debuted three songs: ‘Sparrow,’ ‘He Was My Brother,’ and ‘The Sound of Silence.’ Wilson brought the duo in for a studio audition, where they were signed, after another performance of ‘The Sound of Silence.’ They returned to Gerde’s Folk City in 1964 as Simon and Garfunkel. (Bob Dylan was there, and apparently talked through the whole show. This was the beginning of a long-standing grudge between Dylan and Simon.) 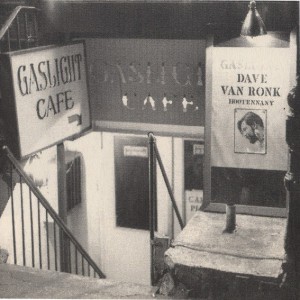 The Gaslight Café and the Kettle of Fish (at 116 and 114 MacDougal Street, respectively) had also continued to book and serve folk musicians. Paul Clayton reportedly met Bob Dylan at the Kettle of Fish; he and Dave Van Ronk would become mentors to Dylan. Folk musicians also gathered at the Bottom Line (15 West 4th Street), and the Village Gate (160 Bleecker Street). Another hangout and performance space was at 152 Bleecker Street, at Café au Go Go, which opened in 1964.

Before it closed in 1969, Café au Go Go hosted Judy Collins, Odetta, the Grateful Dead (who made their New York debut here), Linda Ronstadt, Van Morrison, Jimi Hendrix, James Cotton, Muddy Waters, Jefferson Airplane, Cream, and many others. It was also the place where Joni Mitchell had her first performance in New York City, in 1967. Mitchell also frequented the Tin Angel Café next door, along with Roy Blumenfeld. It is believed that their relationship was the inspiration for her song, ‘Tin Angel.’

Mitchell soon moved out to California. Peter, Paul, and Mary sang at the March on Washington in 1963, and at the Selma-Montgomery March in 1965. Bob Dylan signed with Columbia Records in October of 1962, and moved to 161 West 4th Street. In December of that year, he toured in the United Kingdom. He returned in 1963, to sing with Joan Baez at the March on Washington. Tensions began to rise between himself and the folk and protest movements, however, and 1964 and 1965 saw a rapid change in his musical style. After a rocky start, Simon and Garfunkel also found mainstream success in 1965. They, Mitchell, Dylan, and Peter, Paul, and Mary had moved beyond the Village, becoming nationally (and internationally) known musicians.