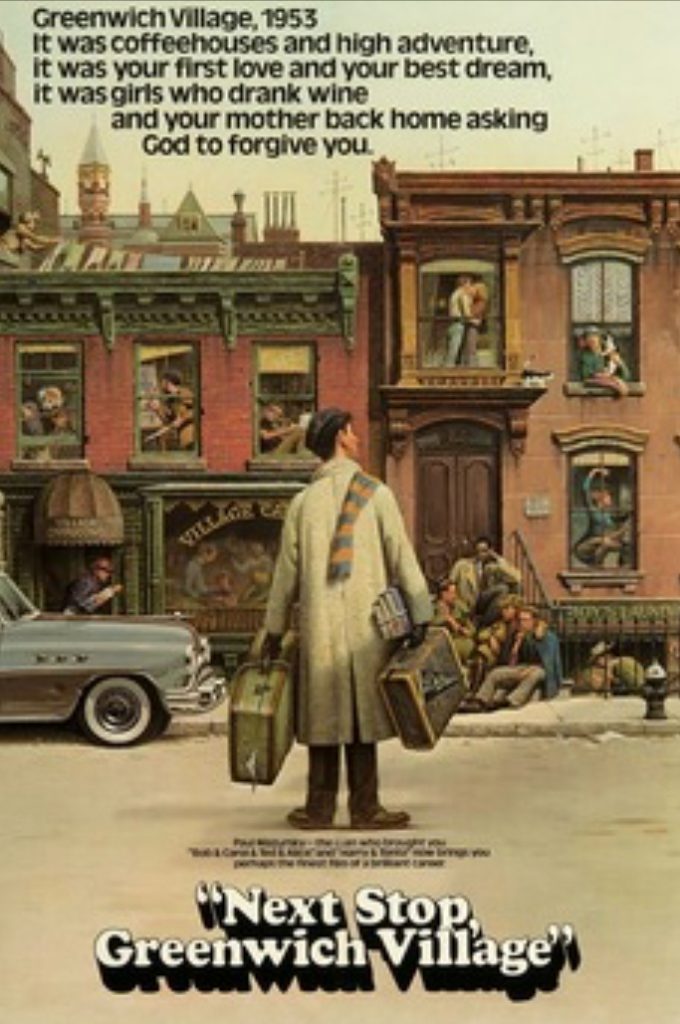 The film takes place in 1953, when a young Jewish boy from Brooklyn named Larry Lipinsky (played by Lenny Baker) moves to the notoriously progressive Greenwich Village to the dismay of his overprotective mother to chase his dreams of stardom. Larry settles into a sparsely furnished lackluster apartment and finds a job at a health food store while attending acting classes.

In the movie, which is part autobiography, Mazursky expertly captures the aura of Greenwich Village in the 1950s – one of excitement, hope, creativity and tolerance. Larry falls in with a like-minded bohemian crew while

waiting for his big break. His group of tight-knit friends – including an emotionally distraught Anita, an aspiring WASP-y poet named Robert, and a gay man named Bernstein – becomes Larry’s new family as he struggles as an actor and works toward a break in Hollywood. Throughout this coming-of-age story, Larry and the rest of the characters revel in the atmosphere of the Village.

Most of Next Stop, Greenwich Village was filmed on location, giving it even more authenticity. Filming locations included 7th Avenue South and Christopher Street (note Village Cigar in the background), Cafe Reggio at 119 MacDougal Street, an apartment at 132A MacDougal Street, and Julius’ Bar at 159 West 10th Street, which GVSHP has recently requested designation for to LPC.

Roger Ebert’s review of the film in 1976 states,

“[The characters are] as hip as they could imagine in 1953. They read poetry and listen to jazz on long-playing records and drink beer at rent parties and have homosexual and black – ah, Negro – friends, and the girls have diaphragms that fail them with distressing regularity… The Village is a way station where it’s possible to try out new ideas and friends, to grow up but also to grow outward. And as Larry finally leaves New York…we see that he’s leaving more than just the city. Perhaps that’s why the movie seems so fondly dated, because it represents a definite time of life – with a beginning in late adolescence and an end in manhood – that can’t be stretched or preserved, only remembered.”

For more on this and other films and TV shows shot in Greenwich Village, check out our “Film and TV Locations” tour on our Greenwich Village Historic District map at www.gvshp.org/GVHD50tour.

Click here for video clips of Next Stop, Greenwich Village.

3 responses to “Next Stop, Greenwich Village: 1953 Was a Good Year for Leaving Home”