Funny Face, the iconic American romantic musical comedy directed by Stanley Donen and written by Leonard Gersche about a Greenwich Village bookworm transformed into the belle of the Paris fashion runways, was released on February 13, 1957. Fred Astaire, Audrey Hepburn, and Kay Thompson star in the movie, which contained assorted songs by George and Ira Gershwin. Though it contains the same star, Fred Astaire, and several of the Gershwins’ original songs, the plot is vastly different from the 1927 George Gershwin Broadway musical of the same name.

Astaire plays fashion photographer Dick Avery, who is sent out by his female boss Maggie Prescott (Kay Thompson) to find a fresh new face. Maggie plays a fashion magazine publisher and editor for Quality magazine. Dick and Maggie want the look to be both “beautiful” and “intellectual” and desire a model who can “think as well as they look.” An assistant suggests Dick visit a bookstore in Greenwich Village to get an intellectual vibe. As illustrated in other blog posts such as this one on Next Stop Greenwich Village, which took place in the 1950s, the Village in the 1950s was seen as a place where young people interested in expressing themselves both creatively and intellectually gathered.

While at the Greenwich Village bookshop, Dick discovers Jo (Audrey Hepburn), a clerk. Dick whisks Jo away to Paris and transforms her into the fashion world’s hottest model. Along the way, the two fall in love. 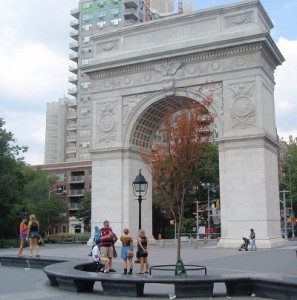 Although the Greenwich Village bookstore in which Jo works was filmed on a Hollywood set, there’s a brief glimpse of Washington Square Park in the days when Fifth Avenue traffic still ran through the Washington Square Arch.