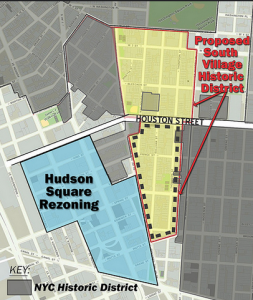 This Sunday, March 13th, is the three year anniversary of the NYC Council Land Use Committee vote to approve the proposed Hudson Square Rezoning.

This vote was a significant milestone for GVSHP and our allies, as we had waged a campaign to get the City Council to refuse to approve the rezoning unless the LPC also committed to move ahead with the nearby proposed South Village Historic District, which would have been impacted by the proposed rezoning.

While we had mixed feelings about the rezoning and had called for changes (some of which were adopted, others not), it nevertheless directly led to the South Village Historic District being landmarked on December 13, 2013, which included a significant chunk of the area we had called for being landmarked, with another significant chunk having already been landmarked in 2010. Unfortunately, the southern third of GVSHP’s proposed South Village Historic District was not approved in 2013, and continues to lack the protections of its surrounding historic districts.

This unprotected area of the South Village south of Houston Street includes approximately 175 buildings. Some of the historic buildings have already been lost to development, such as the Tunnel Garage and  186 Spring Street. This area contains historically significant buildings including St. Anthony of Padua, the oldest extant Italian-American Church in the country, a unique set of early reform housing/model tenements built by and for immigrants, and the oldest house in the South Village, 57 Sullivan Street, built in 1817. 57 Sullivan Street was recently recommended by the LPC for landmark designation as part of its “Backlog Initiative”, but its neighbors lack this any such protection. Hundreds of buildings that feature well preserved 19th century details such as cast iron storefronts, wooden doorways, and original ironwork on facades and entryways are threatened by encroaching development. 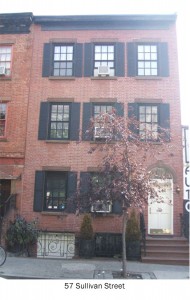 Development in the area including the massive proposal on the St. John’s site will add almost 2 million square feet of commercial and residential space, increasing the pressure on the threatened South Village.

One response to “Hudson Square Rezoning and the South Village”