Four years ago today, the South Village was named to the Preservation League of New York State’s “Seven to Save” list.  This designation was a great boon to our ongoing efforts to preserve and protect the South Village, which has been a priority of GVSHP’s since we first proposed the area for landmark designation in 2006.

What the Preservation League wrote about the South Village in 2012 is just as true today “This neighborhood faces threats from demolition, development pressure, and loss of visual and architectural integrity.” They also noted “The Greenwich Village Society for Historic Preservation (GVSHP) has led the effort to document and advocate for the preservation of the South Village. They are seeking the League’s assistance in urging the NYC Landmarks Preservation Commission to recognize the significance of the entire neighborhood with a historic district designation, which would also help protect the neighborhood’s architectural integrity.”

In 2010, GVSHP was able to secure landmark designation of most of the first third of our proposed South Village Historic District. 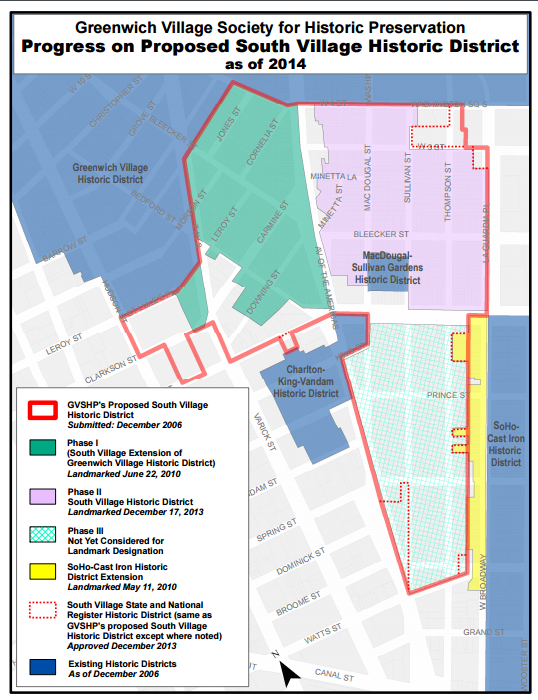 that led to the second third of the proposed district becoming a designated historic district in late 2013. As we noted, the unprotected area of the South Village that still lacks landmark protections, south of Houston Street, includes approximately 175 buildings. Some of the historic buildings have already been lost to development, such as the Tunnel Garage and  186 Spring Street. This area contains historically significant buildings including St. Anthony of Padua Church, the oldest extant Italian-American Church in the country; a unique set of early reform housing/model tenements built by and for immigrants along Thompson and Sullivan Streets; and the oldest house in the South Village, 57 Sullivan Street, built in 1817.

After much pushing by GVSHP, 57 Sullivan Street was recently recommended by the LPC for landmark designation as part of its “Backlog Initiative”, and thus will likely be landmarked before the end of the year.  But its neighbors in the South Village south of Houston Street for the most part still lack similar protections. Hundreds of buildings that feature well preserved 19th and early 20th century details such as cast iron storefronts, wooden doorways, and original ironwork on facades and entryways are threatened by encroaching development.

GVSHP’s advocacy efforts to Save the South Village continue. Click here to urge the City to consider landmarking the remainder of the unprotected South Village. This area is facing increasing pressure with the news of the proposed development of the St. John’s site that will add almost 2 million square feet of commercial and residential space to the neighborhood. This project is going to utilize 200,000 square feet of air rights transferred from nearby Pier 40 in Hudson River Park.