A generous GVSHP supporter dropped off a fun treat to our offices a few weeks ago – old matchbooks from Greenwich Village bars and restaurants. They’re a philluminist’s dream! (Did you know that “philluminist” is the official term for a matchbook collector?) I love how these books meld historic graphic design with New York City social history. Matchbooks are such a ubiquitous part of our commercial culture, I began to wonder about their history. 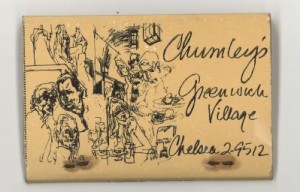 Matchbooks first came to be in the late-18th century, when Joshua Pusey first patented a paper match whose tip was dipped in a sulphur and phosphorus solution. His patent even included that the matches be stapled to a piece of cardboard. And just like that, the matchbook was born. A company immediately bought Pusey’s patent, and they began making them commercially. Almost immediately, they began receiving custom orders from beer and tobacco companies. The connection between matchbook advertising and nightlife has been strong ever since.

The matchbook above belongs to famed Village hangout Chumley’s. Founded in 1922, the speakeasy was a hit during Prohibition and became a favored haunt for artists, authors, poets, and playwrights. I love that the matchbook itself references the communal feel often associated with the cozy bar.

Chumley’s closed suddenly in 2007 when a portion of the roof collapsed, and it has been embroiled in fights between developers, renovators and neighbors ever since – you can read all about the saga on Off The Grid. Despite a long battle, the bar is apparently still set to reopen at some point. But there’s no official word on when that might happen. 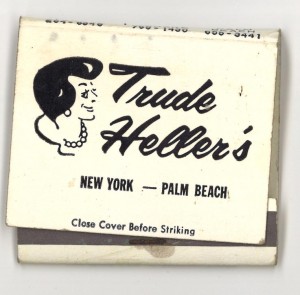 This one for Trude Heller’s, a rock club on 6th Avenue and 9th Street, features a little illustration of the proprietor herself.  Accounts of the day say that Trude’s featured live rock music paired with dance music interludes – go-go dancers were a common sight. The bar closed in the early 1980s and in its place today is a sandwich chain.

The next three matchbooks are interesting because they feature four bars within a three-lot radius.

The Tin Angel matchbook, which is shown open in the above photo, has a simple metallic cover. A few years ago, Off the Grid wrote about the Tin Angel and Joni Mitchell – the bar was the inspiration for her song of the same name. Inside the Tin Angel book is an advertisement for The Bitter End, a club right next door that shared the same owners. The Tin Angel was located at 145 Bleecker Street, on the second floor. And on the bottom floor of that building was The Dugout. This is my favorite one in the collection – I love the hanging lamp on the cover, the unusual shape

and size of the matches, and the odd “For Inexpensive…” language on the inside. Two doors down from The Dugout and the Tin Angel, at 149 Bleecker, is another bar whose matchbook we have –  Louis’. I wasn’t able to find out a ton of information on Louis’, aside from it being another favorite of the Greenwich Village music scene in the 1960s. But I like that Louis’ gave its patrons a little game to play. One can imagine that that game got pretty difficult after a few hours spent at Louis’ bar.

Moving over to MacDougal street, here’s a matchbook for The Hip Bagel – ‘The IN Eatery!” 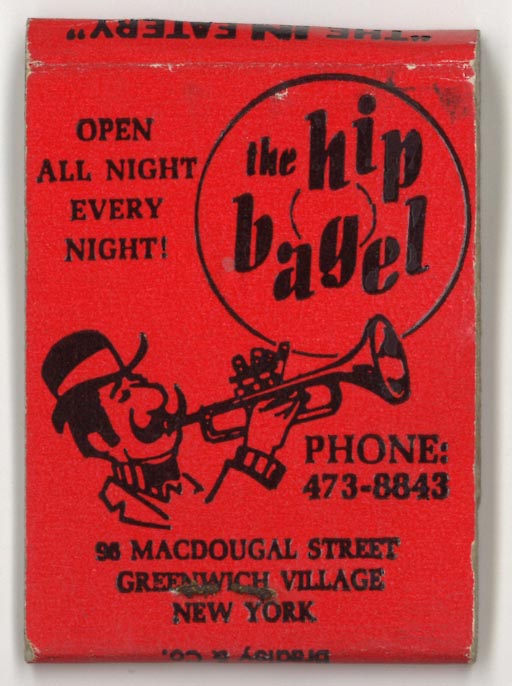 The Hip Bagel was a late-night breakfast spot. The inside cover shows the bar on a map of the Village. I found this advertisement for the bar in an old issue of The

I love these little pieces of Village history. Even though they’re just one square inch of paper, the personality and vibrancy of the Village really comes through. Can’t you just imagine Bob Dylan, Jack Kerouac, or Joni Mitchell having a few of these lying around their hip Village apartments? Maybe you have some lying around your own home! If you do, we’d love to see them . GVSHP is now on Instagram, so you can take a photo and tag us at #gvshp. Or share your memories of these lost Village institutions in the comments!

One response to “Old Village Matchbooks”