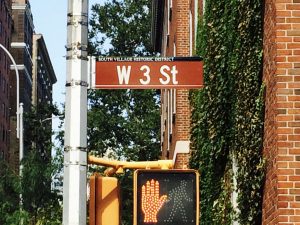 Two and a half years after the designation of the South Village Historic District, the official brown terra cotta signs are now appearing identifying the streets included in the landmark district.  This district is part of the original proposal for South Village designation submitted to LPC by GVHSP in 2006.  To date, the City has designated two-thirds of our original proposal, but the last third, below West Houston Street, still remains without landmarks protections and is therefore vulnerable to out-of-scale and inappropriate development, not to mention potential loss of valuable architectural and cultural resources.

Signs such as these are provided through the New York Landmarks Preservation Foundation (NYLPF) as part of the Historic District Marker Program.  The NYLPF is a non-profit group which raises funds from private sources for work that relates to the designation of New York Landmarks and the Historic District Marker Program provides signs identifying the City’s historic districts with a map, brief description and history of each district.  This type of marker has yet to be installed (these typically take a while to be installed as they are expensive) but the South Village Historic District street signs have started to appear in the western third of the district.

As background, ten years ago at the end of 2006, GVSHP submitted a proposal to the City for landmark designation of the South Village, the area south of Washington Square Park and West 4th Street which was at the time largely lacking in landmark protections.  The proposal was the result of four years of exhaustive research on this 40-block area by GVSHP and a report we commissioned by renowned architectural historian Andrew Dolkart on the history and architecture of the South Village, supporting our argument for landmark protections for the area.  The report and proposal documents the South Village’s unique historic significance as an archetypal immigrant community and as a crucial stepping-stone for Italians in America; as a laboratory of working-class architecture and an intact vestige of turn-of-the-last century New York; as the site of important cultural innovations and events; and as an important location in the history of New York’s African-American and lesbian and gay communities.  The proposed designation was even more compelling because so much of the 19th and early-20th century built fabric of the area remained intact. This is one of the few places where the landscape of working-class New York was virtually unaltered.

In 2010, the NYC Landmarks Preservation Commission designated the first third of our proposed South Village Historic District known as the Greenwich Village Historic District Extension II.  Though the victory was sweet, there was still much to do.  83 Thompson/182 Spring Street was slated for demolition and new development.  The Children’s Aid Society had also begun to solicit bids for its multi-building site on Sullivan Street touting the unused development rights which would allow a much larger, taller structure on the site.  Additional sites were coming under threat and/or demolished in the area that still had yet to be designated.

On April 10, 2011, GVSHP held a rally in front of the Children’s Aid Society on Sullivan Street calling upon the City to landmark the remaining two-thirds of the proposed South Village Historic District as soon as possible. We continued the pressure by seeking New York State “Seven to Save” designation for the South Village. On March 21, 2012, Jay DiLorenzo, President of the Preservation League of the State of New York announced the inclusion of the South Village on the League’s annual “Seven to Save” list, which highlights endangered historic places throughout the state.  To further increase the pressure, we also pursued listing for the entire South Village on the New York State and National Registers of Historic Places, which was finalized in December of 2013 (click HERE for the designation report). 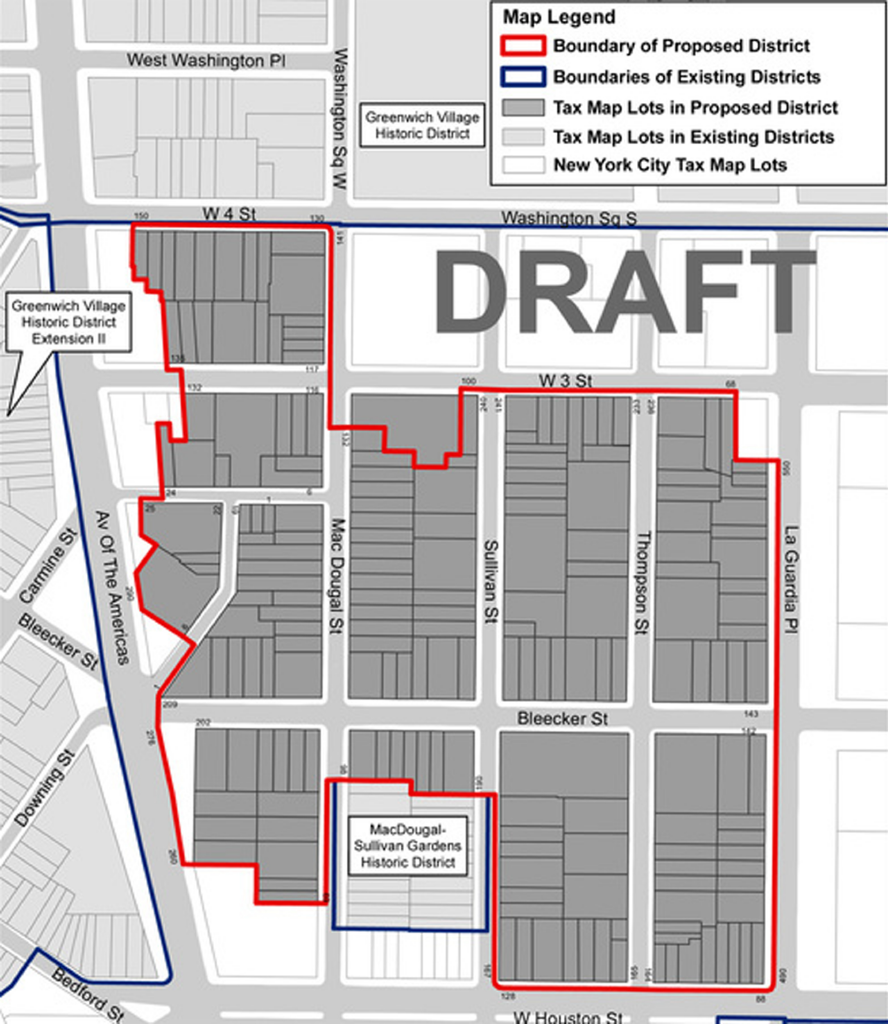 If you want to help protect the South Village, click HERE, to send a letter to City officials and click HERE for the latest news.

One response to “Look Up! Its the South Village!”