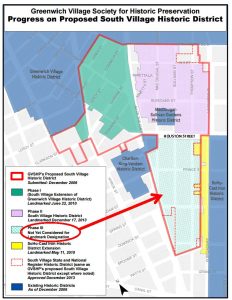 Last week, news broke that the City will be moving ahead with the final phase of GVSHP’s proposed South Village Historic District, a roughly ten-block, one hundred sixty building area south of Houston Street between Sixth Avenue and West Broadway.  This amazing news is the culmination of a more than ten year campaign to seek designation of the South Village Historic District and the result of hard work from GVSHP, our community partners, elected officials, and advocates who participated in hearings, protests, and letter writing campaigns.

We have written extensively about the South Village in Off the Grid, most recently just last Friday, when we recognized Chess Forum, located at 219 Thompson Street, as our Business of the month, as well as last Wednesday, when we wrote about the South Village Historic Distrcit street signs finally being installed. Earlier this month we installed an historic plaque on the former home and studio of Chaim Gross, at 526 LaGuardia Place.

Over the summer we looked at Rafetto’s Pasta on Romana Rafetto’s birthday (listen to her oral history here), and Grover Van Dexter, and The Pope of Greenwich Village. Many of the bars and clubs highlighted in our Old Village Matchbooks post are located in the South Village. We looked back at rallies held to Save The South Village! We were very excited to report on the long-awaited progress at 43 MacDougal Street and when the Preservation League of NY State named the South Village to its Seven to Save List, as well as the Hudson Square Rezoning milestone that led to the landmarking of the South Village Historic District back in 2013.