There is an absurdity in the photos and video which depict the event now known as “The Beatnik Riots” in Washington Square Park on April 9, 1961. At face value, the key characters in this drama are earnest, clean-shaven, bespectacled, young men in jacket and tie, and young ladies coiffed and dressed much in the style of Jacqueline Kennedy who happen to be carrying instruments through Washington Square Park. So why were these “ne’er do well degenerates” targeted, arrested, and beaten by the New York City Police Department for openly singing in the park? 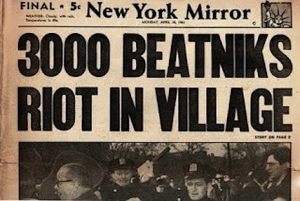 The Village in the early 60’s was still a hold out for the artistic community. In 1961 the beatniks were ascendant; performing and living in the Villages. Ginsburg and Kerouac were on everyone’s lips. The neighborhood was once again the epicenter of American Bohemia. The American folk music scene, which had waned since the early 50’s when The Weavers and Pete Seeger had been placed on a list of “reds” that included writers, artists, musicians, and actors, was making a big comeback on the coattails of the beats.
Musicians had begun to congregate in WSP to play music, primarily on Sundays, but throughout the week as well, since after World War II. Various cliques of musicians eventually formed. There were the Zionists singing and dancing “Hava Nagila,” the Stalinists, the bluegrass musicians, the beat poets, and the folk traditionalists. All of the “troubadours,” who were mostly college kids, would hang out and sing together in the park peacefully.

Gentrification of the area was also on the rise. The well-heeled social crowd, who had become hip to the new generation, not only wanted to view artists from afar, they wanted to live amongst them. The property value of the neighborhood began to rise with the increased demand for homes in the Village. Along with the infusion of the elite, paradoxically came the cry for quiet and order in the park.

Newbold Morris, a silk stocking descendant of the original Colonial Morrises, had recently succeeded Robert Moses as parks commissioner. Morris considered the music movement in the park to be a violation of the park’s sanctity. He denounced the folk movement for attracting “elements from the Bronx and so on,” and was supported in his efforts to restrict access to the park by the Committee to Preserve the Dignity and Beauty of Washington Square Park and the Washington Square Association. Not only were the folkies and various others playing in the park, but the Commissioner and the residents alike were alarmed by the increasing prevalence of racially mixed couples and bongo-playing African musicians who had come upon the scene. So while the stated reason for complaints about music in the park was the noise and subsequent violation of the grassy areas, the underlying, unstated reason for the discord was ultimately social. The Commissioner and the residents were uncomfortable with the emerging racially different complexion of the park and its inhabitants. In their eyes, a crackdown was necessary.

Izzy Young, the owner of Folklore center, a meeting place and hub for the folk musicians, had applied for a reissuing of his permit to play in the park 7 days before the riot began.  Once upon a time, the right to play music in Washington Square Park was not a foregone conclusion.  Before 1961, one was required to carry a permit in order to play music there. The permits were generally readily available to anyone who wished to obtain one and enforcement of the requirement was lax at best, if enforced at all. Morris decided, in an attempt to assuage the residents and to quell the surging changes in the park, that he would no longer issue permits to play there. He outright denied Young’s application for a permit to sing.

Young then organized a peaceful protest demonstration with a few hundred young people to call attention to the unjust denial of the right to sing and play in the park. Young and his supporters then took to the park and began to sing in defiance. “This Land is Your Land” by Woody Guthrie and The Star Spangled Banner were sung in protest of the heavy police presence sent to the park.

What resulted was a two-hour melee caught on camera, both still and video. Many musicians were hauled away in paddy wagons on charges of disorderly conduct. Activist Reverend Howard Moody invited the protesters into Judson Memorial Church, a nearby sanctuary and bastion of social justice. From here the dispossessed raised funds to launch legal action against the ban. Izzy Young was backed by the American Civil Liberties Union and the fight raged on for weeks. Eventually, after legal battles and appeals, the right to sing and play freely in WSP was upheld and the requirement to carry a permit to play there was dismissed.

The 1961 ‘Beatnik Riot’ was truly one of the first of the many vociferous protests that emerged over the next two turbulent decades around free speech issues.  It remains a cornerstone of the long fight for free speech and artistic expression in our city and country.