This is part of Off the Grid’s “My Favorite Things” series.

As the old saying goes, you win some, you lose some.  That’s particularly true in preservation, where sometimes in spite of the most heroic of efforts and compelling of cases, historic treasures succumb to the wrecking ball.

I’m frequently asked, “Which fight do you most regret losing; which building do you mourn the loss of most?”  It often comes as a surprise that the answer, inevitably, is a parking garage — one which seemed to almost eerily peer into the future. 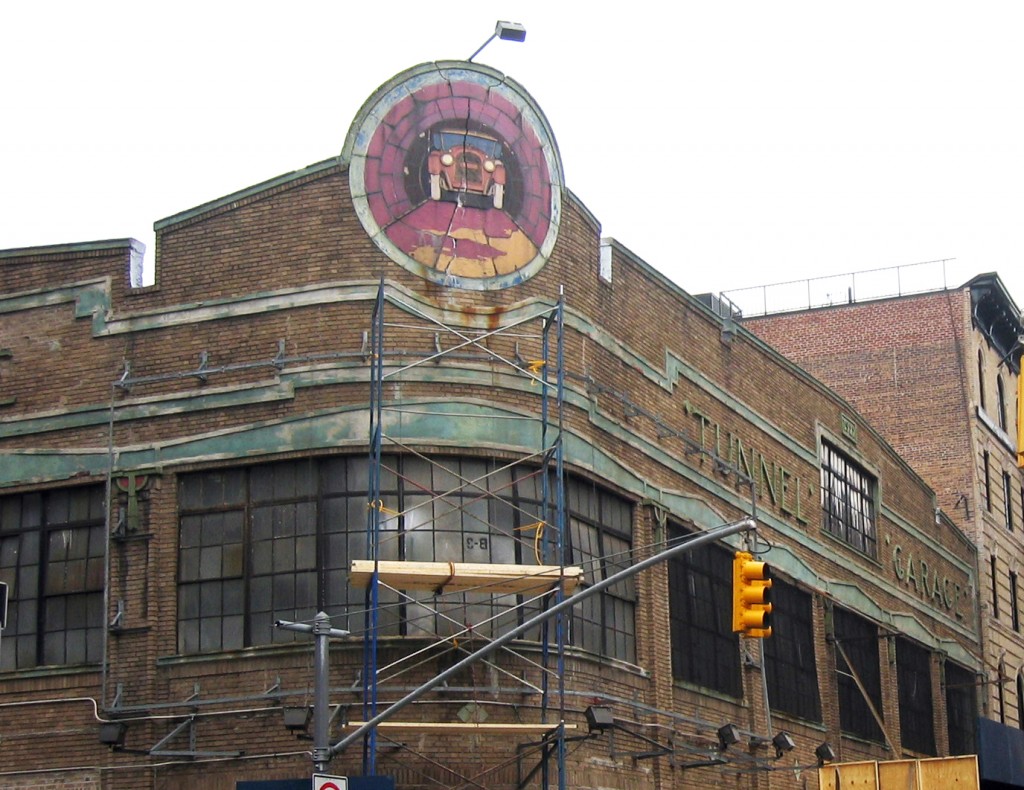 The Tunnel Garage, at Broome and Thompson Streets, where the South Village meets SoHo, was no ordinary parking garage.  Built in 1922, it was a thing of extraordinary beauty, a sublime ode to the dawn of the automobile age and to the engineering marvel of its time which was the Holland Tunnel.

Designed by architect Hector Hamilton for Charlton Street physician George Stivers, the Tunnel Garage’s eye-catching design is generally referred to as “Art Deco,” as it embodies the streamlined forms, casement industrial windows, terra cotta polychromy, and elegant graphic lettering typical of the style.  However, in one of many examples of the garage’s extraordinary nature, it was built a full three years before the 1925 Paris Exposition Internationale des Arts Décoratifs et Industriels Modernes from which ‘Art Deco’ gets its name, and from which the style’s characteristic elements supposedly crystallized.

This was only one of many ways in which the Tunnel Garage appeared to peer into the future.  The garage was named for the nearby Holland Tunnel (which was itself named for its chief engineer, Clifford Millburn Holland, who died during the tunnel’s construction, rather than for the country which first established European settlement in Lower Manhattan, as is often assumed).  However, the tunnel itself did not actually open until 1927, five years after the garage (though construction had begun in 1922, and had been in the planning stages since at least 1906). 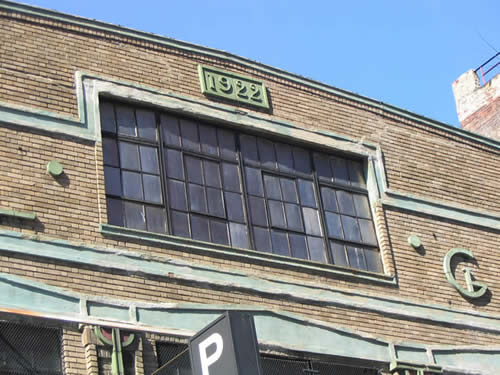 When built, the Holland Tunnel was the longest vehicular tunnel in the world, and the first vehicular connection across the Hudson (the Holland Tunnel was designated a National Historic Civil and Mechanical Engineering Landmark in 1982 and a National Historic Landmark in 1993). It appears the Tunnel Garage was intended to, among other things, accommodate drivers coming into Manhattan, allowing you to park your car there and then explore the city further by foot, streetcar, subway, or elevated train.

In another oddly prescient quirk, the Tunnel Garage was adorned with a rounded terra cotta medallion showing a car emerging from a tunnel, presumably the nearby, not-yet-completed Holland Tunnel.  However, the type of car shown in the medallion has been the subject of some dispute.  Some assert  this was a Model T — the very first car to be mass-produced, which revolutionized the automobile industry, consumerism, and the physical landscape of not only America but much of the world.

However, as some auto-enthusiasts have pointed out, the T, which first came into production in 1908, typically had a much slighter design with smaller wheels and fenders than the model shown in the medallion, which appears at first glance to be more similar to the Model A — the Model T’s later and somewhat more substantial cousin.  However, the Model A did not come on the market until 1927, and while we have not been able to confirm with absolute certainty that the medallion appeared on the Tunnel Garage when it opened in 1922, the addition of such an element five years later would certainly be unusual, and the rounded circular pediment piece in in the garage in which the medallion was found seemed to be designed to embrace such an element.  One possible explanation: the Model T did stay in production until 1927, and the later models appear to have, at least in some cases, included the larger wheels, headlights, and fenders generally considered more characteristic of the Model A.

Regardless of the car’s make (and whether it was a vision of the future or a romantic snapshot of the present), the multi-colored terra cotta medallion was one of many elements which made the Tunnel Garage so iconic and beloved.  Sadly, the medallion was covered by advertising signage, as was much of the facade of the garage, beginning in the early 1980’s, and the garage’s condition was allowed to deteriorate, its exterior covered in graffiti.

However, even at the worst of times, the garage’s bold graphic lettering, its green and orange terra cotta ornamental accents, its original casement windows, and its striking rounded corner, remained intact.

In 2005, a new owner announced plans to demolish the building to make way for condos.  The Greenwich Village Society for Historic Preservation, neighbors under the umbrella of the “Friends of the Tunnel Garage,” the SoHo Alliance, and legions of historic preservationists rallied to save the building on March 24, 2006, calling upon the City to landmark it (read the NY Times story HERE).  Support came from as far as Art Deco capitals Miami Beach and Los Angeles, from which local preservation organizations were compelled to call upon New York City to do what had been done successfully in these other cities, preserve and re-use these early Art Deco treasures.  GVSHP even got the building determined eligible for the State and National Register of Historic Places, which would have qualified the owner for tax breaks and potentially even financial aid for restoring and preserving the building. 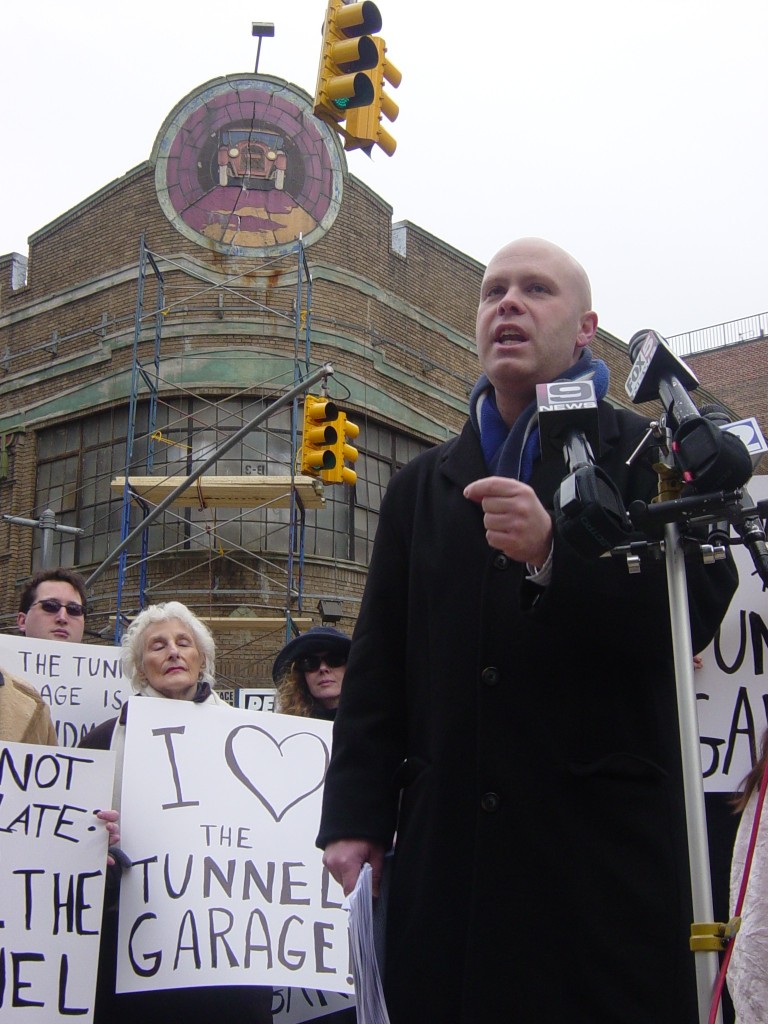 Unfortunately, these pleas feel on deaf ears.  The NYC Landmarks Preservation Commission refused to even hold a hearing on designation, and in April of 2006, the owner moved ahead with demolition.  Adding insult to injury, the NYC Board of Standards and Appeals also gave the developer a zoning variance, based upon a supposed “hardship,” allowing the construction of the 9-story condo you see on the site today.

Ironically, it was only as the building was being prepared for demolition that the billboards and advertising signs were removed, revealing it in its full glory for the first time in nearly a quarter-century.

GVSHP and other advocates called for the salvaging and preservation of the Tunnel Garage’s iconic terra cotta medallion.  After significant lobbying, the owner agreed.  However, while we hoped to see the medallion installed in the small park across the street for the public to enjoy in perpetuity, the developer chose instead to mount it on the roof of the new building, where it can only be seen from a distance (or, by the condo dwellers who can access the roof).  Additionally, because it originally was mounted on a curved surface as opposed to the current flat one, like a flattened orange skin, the medallion had to chopped up into pieces and spread out across the surface of its new perch, losing much of the integrity, as well as the visibility, it originally had.

The Tunnel Garage was located within GVSHP’s proposed South Village Historic District, the final phase of which was landmarked in 2016 — too late for the Tunnel Garage — but ironically including the site where it once stood and its not-so-historic replacement

The Tunnel Garage — a romantic vision of the future from deep in our past. Gone but not forgotten, and certainly still one of my favorite things.