Show your love for community centers and spaces for a powerful and quick event next Tuesday.  Join GVSHP, elected officials, community groups, and neighbors for a rally and press conference on the steps of City Hall to save the former Charas/El Bohio Community Center (the old P.S. 64) at 605 East 9th Street, which is in grave danger of being turned into a fake “dorm for hire” by its developer owner.

The Tuesday February 14th Rally starts at 2 pm and is intended to send a strong message to Mayor de Blasio not to let this treasured community resource suffer the same fate as the nearby Rivington House, where a deed restriction was lifted and a community resource was given away. Come by for a bit.

Before the rally on Tuesday there will be a fun, free and good for all ages sign making party on Sunday at the Museum of Reclaimed Urban Spaces. More information and RSVP here. 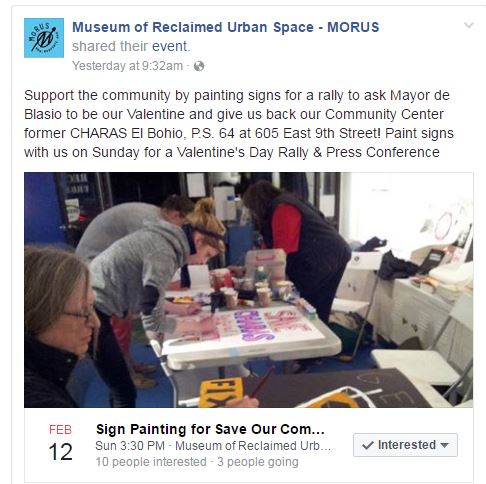 The former Charas/P.S. 64 once served as first an innovative model public school designed by architect C.B.J. Snyder and then a vital and groundbreaking community and cultural center. But in the late 1990’s then-Mayor Giuliani sold the building to a developer, but with the limitation that it could only be used as a “community facility.”  The developer buyer consistently sought to tear the building down (thwarted by a successful 2005 landmarking) and to turn the building into a revolving door “dorm for hire” (dorms are allowed under New York City law as “community facilities,” but not the kind of open-door dorms where beds as rented out individually, which this developer has consistently pursued).  EVGrieve reported on one proposal dubbed “The Nightmare on Ninth Street”.

The developer has hired the same lobbyist involved in the Rivington House scandal to allow him to skirt the strict rules around dorms and community facilities, which GVSHP and our allies have been fighting. See this article by Ross Barkan here to learn more about that issue. The developer has retained this lobbyist even after that scandal continues to resonate in the neighborhood and embroil the Mayor in continued controversy.  See the Mayor being quizzed recently by Senator Daniel Squadron here.

The Villager had a recent expose about Capalino’s lobbying on behalf of this controversial developer on this deed restrictive property.

We’ll gather on February 14 to send a strong message to the Mayor that he should not allow these rules to be bent for this unscrupulous developer, and that we want this precious and historic space turned back over for a real community center.

Whether you celebrate Valentine’s Day, or Galenalia (as Kathyrn Doyle writes about in McSweeney’s Internet Tendency; look it up) or something else, or none of the above, come out and show your love for community centers and spaces.  If you plan to join us Tuesday at 2pm  on the steps of City Hall, please email us at info@gvshp.org to send you a flier and more.