It was on May 17th, 1966, that the Schermerhorn Building at 376-380 Lafayette was designated a New York City landmark. The grand Romanesque Revival edifice was actually the third on Lafayette Street to be given landmark status, following Colonnade Row and the Astor Library (now home to the Public Theater, a 2017 Village Award winner!).

Built in 1888, its six stories were impressively tall for the time and its massing is, as the designation report states, “unusually imposing.” And although 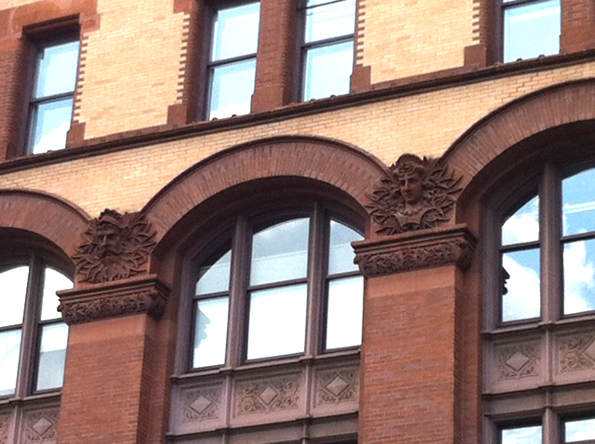 six-story buildings are a dime a dozen today, there is indeed something still very impressive and commanding about the Schermerhorn Building. The dark brown brick piers and ornamental sandstone corners combine to create a real heft at the ground level, and all the trappings of its Romanesque Revival style convey a solidness and strength. But it is also a brilliantly balanced building – the very solid and weighty ground level lifts upward toward arched windows that terminate high above Lafayette on the fourth floor, where its dark brown brick becomes a lighter, tan color. And all over the building, whimsical and playful ornamentation save the building from feeling too serious or foreboding. And it’s no wonder that the building is designed so expertly – its architect, Henry Janeway Hardenbergh, also designed The Dakota Apartments and the Plaza Hotel, two other revered New York City landmarks.

In its entirety, the building is a sight to behold! Take a walk down to Lafayette and Great Jones sometime soon to see for yourself. And if you want to learn more about 376 Lafayette, including it’s uses throughout the years, check out this earlier blog post by Drew Durniak.