Since it opened on December 1, 1904, the Tompkins Square Branch of the New York Public Library has served as an important community resource.  Situated on East 10th Street between Avenue A and Avenue B, the building itself was designated an individual landmark by the city’s Landmarks Preservation Commission on May 18, 1999. It enjoys the double-distinction of being located within the impressive row of buildings lining the north side of Tompkins Square which were subsequently designated the East 10th Street Historic District (more here), thus granting it both individual landmark and historic district status.

The history of the Tompkins Square Branch goes back to 1901, when controversial steel magnate Andrew Carnegie donated $5.2 million to the city to help build a network of branch libraries across the five boroughs. The Tompkins Square Branch was the ninth Carnegie Library built in the city and was designed in a restrained Classical Revival style by Charles McKim of the well-known firm of McKim, Mead, & White.  Carnegie’s business dealings were known as very anti-labor and for the violent repression of striking workers during the Homestead strike.

The library’s designation report notes that the nearby institutional buildings helped influence the siting of the library – these include P.S. 64 to the east, which was in the planning stages, the (now landmarked) public baths a block north on 11th Street, and the Boys Club Building on Avenue A and 10th Street. 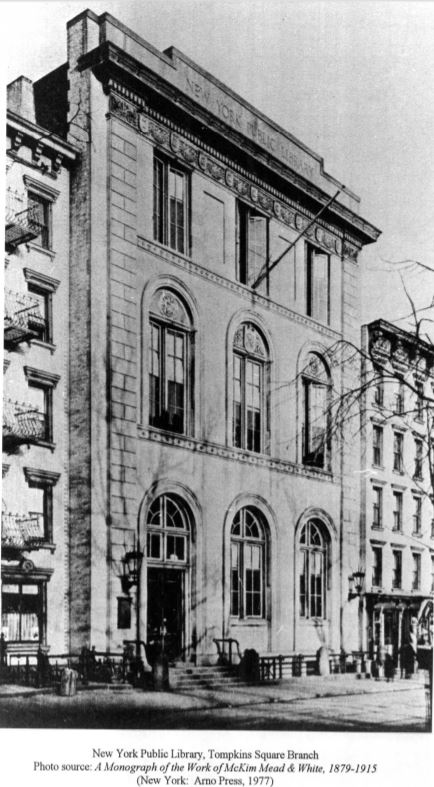 The library reached out to the local community from its beginning — at the time the large German population was giving way to new immigrant groups like Italians, Eastern-European Jews, and Poles. The library held one of the most extensive Polish book collections in the city, and used its specially-built community rooms for meetings and classes for the public.