The Espionage Act was passed on June 15th, 1917, shortly after the United States entered World War I in April of that year. Its goals included limiting interference with recruitment efforts and preventing the support of enemies of United States during wartime. In his message to Congress, President Woodrow Wilson warned that the war would require a redefinition of national loyalty, with “millions of men and women of German birth and native sympathy who live amongst us….If there should be disloyalty, it will be dealt with a firm hand of repression.” Repression indeed. The Espionage Act, as well as the Sedition Act of 1918 (passed May 16), were clearly aimed at socialists, pacifists and other anti-war activists, many of whom lived, worked, and were targeted right here in our neighborhood. 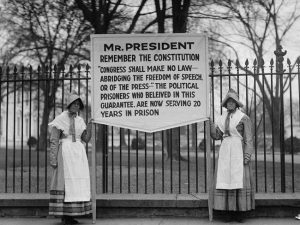 Congress passed these laws due to a growing fear that criticism of the war would hinder recruitment, and that the perceived sympathy of labor groups like the Industrial Workers of the World to workers throughout the world would undermine the United States government. The Espionage Act was reinforced by the Sedition Act 1918, which made it illegal to “willfully utter, print, write, or publish any disloyal, profane, scurrilous, or abusive language about the form of the Government of the United States” or to “willfully urge, incite, or advocate any curtailment of the production” of the things “necessary or essential to the prosecution of the war.” These laws criminalized insulting or abusing the U.S. government, the flag, the Constitution or the military; agitating against the production of necessary war materials; or advocating, teaching or defending any of these acts.

Many locals were arrested and convicted under the law, including Rose Harriet Wieslander, a Lower East Side Russian Jewish immigrant who married an Episcopalian, both of whom became active members of the Socialist Party of America. Rose was convicted of violating the Espionage Act due to her opposition of U.S. involvement in World War I, and was sentenced to 10 years in prison, but the government dropped the case on appeal. Read her entire story here.

Anarchist and revolutionary thinker Emma Goldman, considered by the F.B.I. as “one of the most dangerous women in the country,” was convicted under the Espionage Act in 1917 and sentenced to two years in jail for conspiring to “induce persons not to register” for the draft. After her release, she was arrested along with hundreds of others and deported to Russia. Read about Emma Goldman’s home at 208 east 13th Street here.

Following WWI, the Espionage and Sedition Acts were used extensively during a period of great fear of communist influence, known as the first Red Scare. Many of us are more familiar with the second Red Scare, which took place in the 1940’s and 50’s and is associated with Senator Joseph McCarthy, but the first Red Scare highly impacted the Village, as it was a hotbed of radicalism and activism during that time, as well as many other eras.

During the second Red Scare, Julius and Ethel Rosenberg, who had extensive ties to the Village and Lower East Side, were convicted under the Act. Ethel lived on Avenue A and was later held at the Women’s House of Detention.

Major portions of the Espionage Act remain part of United States law to the present day, and have been used to obtain convictions in high profile cases such as Adrich Ames, Jonathan Pollard, Robert Hanssen, and most recently, Chelsea Manning.

Want to learn about more agitators in our neighborhoods?  See our Civil Rights and Social Justice Map below: