In this series, ‘More is More,’ we look at historic district extensions in our area.

The district retained its colonial street pattern even after the adoption of the Manhattan grid plan in 1811.  The oldest buildings within the district are modest examples of two-and-a-half and three story Federal and Greek Revival row houses dating from the 1810’s to the 1850’s when this area was a desirable residential area.  Before and after the Civil War, tenements were built to house the incoming immigrant population and there are excellent examples of pre-law, old-law and new law configurations designed in the Italianate, neo-Grec, Queen Anne, Romanesque and Renaissance Revival Styles.

From the Civil War to the turn of the century, thousands of European immigrants settled in Greenwich Village’s southern section.  The dominant Irish, German, and later Italian immigrant groups created working-class communities centered around social institutions.  Institutional and religious structures also have a strong presence in the historic district, as do larger commercial buildings, particularly along the Avenues and at major intersections.

GVSHP continued to push the City to designate the final third of the South Village and with the designation of the Sullivan-Thompson Historic District in December of 2016, that goal was achieved. 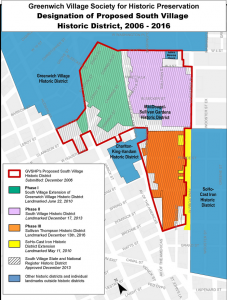