On this day in 1970, the Landmarks Preservation Commission granted landmark status to the dignified Greek Revival house at 37 East 4th Street. This three and a half story house was built in 1844-45 by Samuel Tredwell Skidmore, a relative of Seabury Tredwell, who lived with his family only a few doors away at 29 East 4thStreet, known today as the Merchant’s House Museum (see a video of a program we did with the Merchant’s House this week.)  The Skidmore house was also listed to the National Register of Historic Places in 1979.

The Skidmore house and the Merchant’s House Museum are the two last surviving remnants of the once numerous and elegant early 19th century residences on this block.  In between them is a now-vacant lot that provides access and ventilation to the NYC Water Tunnel #3.  That empty lot was one of the subjects of a Community Board #2 resolution about the need for green public space.

Things have changed since the LPC designation report noted that:

“Although this brick house is only three and one-half stories high, it aligns perfectly with the five-story 20th century apartment house that abuts it at the east.” Today that 5-story apartment house is gone, replaced by a 15-story, 133-unit apartment complex that towers over it to the north east.

At the time of the Skidmore House’s completion in 1845, it was located in the midst of a very fashionable residential neighborhood. Meanwhile the area to the north was largely undeveloped.  Grace Church, at 10th Street and Broadway for example, was still under construction.

According to the designation report of the LPC:

No. 37, built in 1844-45, is unusually impressive… a deep house, occupying a larger than usual portion of the lot. A high stoop, over a stone basement which still retains traces of rustication, leads to a handsome doorway with full entablature supported by a pair of Ionic columns, a typically Greek Revival feature. The Inner doorway, behind paneled reveals, is flanked by blocked-up sidelights, set between square pilasters. A three-paned transom crowns the doorway. Traces of a delicate carved molding, which once surrounded the transom, are still visible. Vestiges of the cap moldings, which originally surmounted the window lintels, remain above the windows of the third story. Six-over-six window sash is still in place at the third story, and the low attic windows and simple wood roof cornice, with fascia below, are likewise features of the Greek Revival style.

A dramatic transformation from derelict wreck to beautifully restored landmark has continued the fascinating tale of this unique structure.  In 1974 New York Times art critic John Russel  called it “one of the prettiest houses in the town”.  But by the 90’s the owner’s estate had left the building rotting and exposed to the elements and in disrepair (a condition we currently grapple with at the landmarked former PS 64 /CHARAS on East 9th & 10th streets.)  By 2010, the building was near collapse.

Fortunately the Landmark Preservation Commission eventually commenced a lawsuit against the owners for their failure to maintain the building, and won.  The owners were ordered by the State Supreme Court to  repair and restore the exterior (read more here).  The building has since then undergone a full restoration. 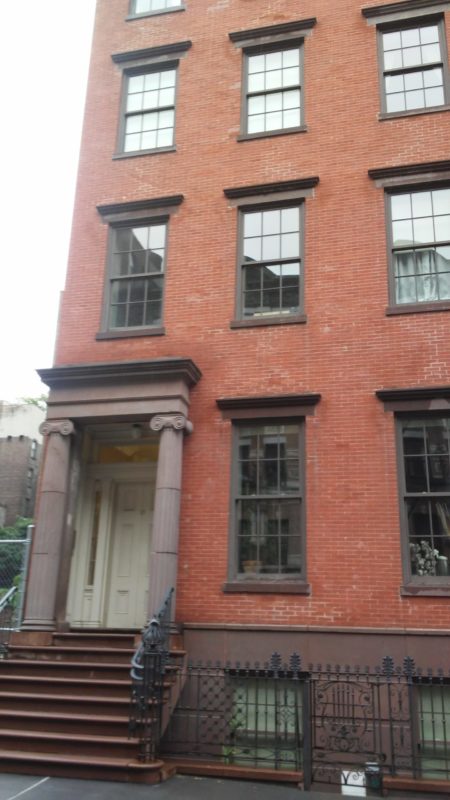 If you want to see the designation report for this building or all the others in our neighborhoods, visit here.