Though the Village Voice ceased production some time ago, old issues can provide a nice insight into what was going on in the neighborhood and the world in years passed. So today we’re taking a look back at the August 31, 1967 issue, to see how things were looking as the “Summer of Love” came to an end.

The cover story was about the printed poster boom. “Riding the crest of a psychedelic market”, over a million advertising posters were hitting the market every month, making use of full color “graphic explosions”. The other front page article describes the opening of the national headquarters of “Concerned Democrats”, a group whose goal was to defeat Lyndon Johnson in the 1968 Democratic Primary. As we now know, in the following spring of 1968 Johnson bowed out of the primary race due to his growing unpopularity over Vietnam, and Republican candidate Richard Nixon went on to win the election.

There was an interesting story on page 12 written by Leticia Kent (who conducted an oral history with GVSHP here) about two migrant workers brought here from Virginia and abandoned in a truck on Christopher Street by the man that hired them. Village residents and businesses provided them with food and restrooms. After five days of red tape, the truck was towed to a police impound pier and the men were taken care of by “welfare”. 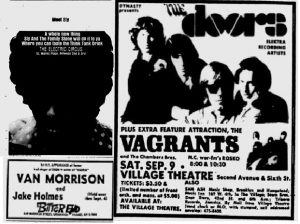 But my favorite part of these old papers are the ads. The Village Voice ads in 1967 had not yet become the photos I remember from my youth in the 80s and 90s of the escorts and “massage parlors”. The ads of 1967 were small businesses, music festivals, weekend getaways, peace protests and a wide variety of other local items.

You could see the Doors for $3.50, Sly and the Family Stone at the Electric Circus, or Van Morrison at the Bitter End.

The Strand still stands at 12th and Broadway, and we can all remember the original Barnes and Noble retail store on 18th and 5th that opened in 1932 but closed its doors in 2014.

My favorite ad from this edition is for the off-Broadway play “Fortune and Men’s Eyes”, which opened at the Actor’s Playhouse on February 23, 1967. This play launched the career of producer and activist David Rothenberg, and served as the inspiration of the founding of the Fortune Society. The play has since been translated into 40 languages and produced in over 100 countries. Since 1969, the fortune society has helped tens of thousands of formerly incarcerated people reintegrate into society upon their release.

It is a leader in its field, providing housing and social services, and develops instrumental public policy. In 2015 David Rothenberg was a GVSHP Village Awardee, and we recently conducted an oral history with him. Join us on Monday, September 18th, 7:00 – 8:30 p.m at a free public program to honor and examine the Fortune Society’s roots, diving deeper into Rothenberg’s history with Greenwich Village and how the neighborhood shaped his personality and fostered his professional ambitions. A reception will follow. Click here to register for this free event.