Lafayette Street in NoHo is much on my mind today.  September 6 happens to be the birthday in 1757 of the man for whom the street is named, the Marquis de Lafayette — an immigrant and a hero of the Revolutionary War. It’s also on my mind because I grew up in Lafayette, Louisiana, and it always makes me feel somewhat nostalgic strolling there. Nostalgia aside, the street abounds with landmarked buildings; architectural treasures that are some of my very favorite in the city.

Let’s take a short tour of just those north of Houston Street, in the area covered by GVSHP.

The De Vinne Press Building is located at 393-399 Lafayette Street in the NoHo Historic district. Built in 1885-1886, this gorgeous brick structure was designed by the firm of Babb, Cook & Willard in Romanesque Revival style.  Theodore Low De Vinne, a leading New York typographer and printer, commissioned the building for his printing company.  Prior to its inclusion in the NoHo Historic District, the De Vinne Press Building was designated an individual New York City landmark in 1966, and was added to the National Register of Historic Places in 1977.

Walking north, one beholds a truly magnificent structure at 428-434 Lafayette; the remnant of Colonnade Row, also known as LaGrange Terrace. It is a series of Greek Revival buildings originally constructed in the early 1830s and named after the French country estate of Marquis de Lafayette. Of the original nine row houses, only four remain today.  The buildings each contained 26 rooms and were 27 feet wide, with 15-foot deep front yards which were uncommon at the time. Their facades were made entirely of Westchester marble which was quarried at Sing Sing prison, where the convicts worked to cut it for use in construction.  Notable for having lived there, besides some of the Astor family, are Julia Gardiner, who would become President John Tyler’s First Lady, Cornelius Vanderbilt, Washington Irving, and Warren Delano.  The buildings were among the first to become landmarked by New York City after the enactment of the landmarks law in 1965, and they were added to the National Register of Historic Places in 1976. You can read their designation report here.

And last, but certainly not least, is The Public Theater, originally built as the Astor Library. 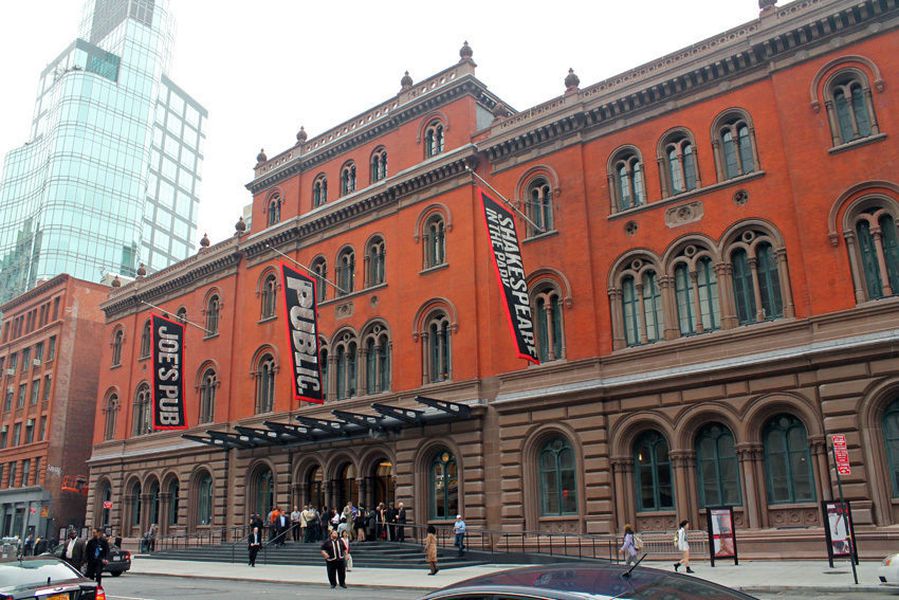 John Jacob Astor sought to leave a substantial legacy to the people of the city of New York.  Upon his death he bequeathed $400,000 for the purposes of building a research library.  His will had been explicit about the location of the institution. It was to sit on Lafayette Place, directly across the street from the elegant LaGrange Terrace in the most fashionable residential section of New York. Astor’s son, William Backhouse Astor, who took on the project after his father’s death, commissioned German-born architect Alexander Saeltzer to design the building. Saeltzer used the style prevalent in Germany for civic buildings at the time, the Rundbogenstil style; sometimes called German Neo-Romanesque.  The building featured rusticated brownstone and graceful arched windows.  It stands today as a testament to the early years of the landmarks law.  In the words of well-known critic Ada Louise Huxtable in a fascinating 1966 New York Times article entitled “A Landmark Saved: Historic Building Scheduled for Razing Is Rescued With Aid of City’s New Law”:

New York City has scored its first major preservation success under its 18-month old landmarks law with the dramatic announcement of Joseph Papp’s plans to purchase the old Astor Library on Lafayette Street as the Shakespeare Festival’s new home. Scheduled for the wrecker’s ball six months ago, the miraculous last-ditch rescue of the Victorian red brick and brownstone structure is a bit of appropriate 19th-century melodrama calculated to make any 20th-century cynic’s heart melt. On a less emotional level, it may also indicate the power of the New York landmarks law to turn the tide in the fortunes of the city’s historic heritage.

In a wonderful addition to the story of the street, The Public has applied to the city to rename a part of Lafayette Street “Joe Papp Way,” in honor of this year’s 50th Anniversary of The Public Theater (read more here).  GVSHP has written a letter of support for the initiative and word on the decision is coming soon.  We will be sure to let you know!

Did you know that Lafayette Street used to be called Lafayette Place, and originally only ran the two blocks from Astor Place to Great Jones Street? Find out how it came to stretch all the way to Foley Square in Lower Manhattan in 1905 by reading here and here.