Today we look back on a critical milestone in the health of our democracy and a red letter day for the State of New York.

The achievement of full voting rights for women in New York State came three years before the certification of the 19th Amendment to the Constitution on August 26, 1920 granted all women in the United States the right to vote (now also known as Women’s Equality Day).  The November 6, 1917 victory for New York women, which resulted from a statewide popular vote that the Suffragette side had lost just a few years earlier, followed fifty years of marching, fundraising, and rallies. The triumph was achieved despite the fears of opponents of women’s suffrage that when a woman received the right to vote, ”political gossip would cause her to neglect the home, forget to mend our clothes and burn the biscuits.” We’ve come a long way, baby….

Just to trace back the etymology of the word, “suffrage” means “voting as a right rather than a privilege.” Suffrage has been in the English language since the Middle Ages. Suffrages were originally prayers. The meaning was extended to requests for assistance, then the assistance provided by a supporting vote, and finally the vote itself.

Therefore, in 1787 the Constitution used suffrage to mean “an inalienable right to vote.”

And the right to vote was what advocates of women’s equality sought. They used suffrage in the phrase “female suffrage” or simply by itself, with the understanding that suffrage referred to voting rights for half of the adult population that had been excluded in the Constitution.

Even beyond its legal meaning, suffrage has connotations that helped the cause. Its sound evokes a sense of suffering and its spelling, ending in “rage,” evokes anger.

The 19th Amendment states: “The right of citizens of the United States to vote shall not be denied or abridged … on account of sex.” With that, the word suffrage was also retired. Since then, campaigns to extend the vote have simply called for “voting rights.”

Not surprisingly, many of the women who were on the forefront of the suffrage movement were Villagers.  Please see our Civil Rights and Social Justice Map for locations and more details, but a few of them are below:

Virginia Woodhull was an American leader of the suffrage movement and was the first woman to run for president. She lived at 17 Great Jones Street (that house and neighboring houses on both sides of Great Jones Street were demolished when Lafayette Street, then known as Lafayette Place, was extended south of Great Jones Street at the turn of the 20th century). An activist for women’s rights, Woodhull was also an advocate of being able to freely love who you choose, and the freedom to marry, divorce, and bear children without government interference. She and her sister Tennessee were the first women to found a stock brokerage firm on Wall Street, and a newspaper, Woodhull & Claflin’s Weekly, which began publication in 1870. In the early 1870s, Woodhull became politically active, speaking out for women’s suffrage. She argued that women already had the right to vote since the 14th and 15th Amendments guaranteed the protection of that right for all citizens, and that all they had to do was use it. She earned the support of women’s rights activists such as Susan B. Anthony, Elizabeth Cady Stanton, and Isabella Beecher Hooker. On April 2, 1870, Woodhull announced her candidacy for President by writing a letter to the editor of the New York Herald. She was nominated under the newly formed Equal Rights Party in 1872 after speaking publicly against the government being composed only of men. This made her the first woman to ever be nominated for president.  Woodhull was vilified in the press for her support of free love, and she was arrested on charges of “publishing an obscene newspaper” after she devoted an issue of her newspaper to highlighting the sexual double standard between men and women. In the election of 1872, she received no electoral votes and a negligible amount of the popular vote.

More information can be found on Virginia Woodhull here and here

Throughout her life, Crystal Eastman was a prolific advocate for women’s rights. She received degrees from Vassar College, Columbia University, and NYU Law School, the latter of which she graduated second in her class. She co-founded the National Woman’s Party with Alice Paul and Lucy Burns and during the First World War helped found the Women’s Peace Party.  In 1917, she created The Liberator, a radical journal of politics, art, and literature, with her younger brother Max. The Liberator was based at 138 West 13th Street and they lived together in the building at 27 West 11th Street. Eastman died in 1928 and has since been called one of the most neglected leaders in United States History, having disappeared from historical memory for fifty years after her death. 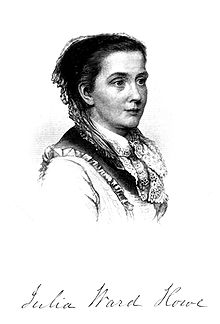 Julia Ward Howe lived in a house at the corner of Broadway and Bond which has since been demolished. Born in New York City in 1819, Howe was a poet, author, abolitionist, social activist, and advocate of women’s suffrage. Mrs. Howe became involved in the reform movement and in 1870 founded the weekly “Woman’s Journal”. Among her numerous achievements, she served as the president of the Association for the Advancement of Women, Massachusetts Women Suffrage Association, and the New England Women Suffrage Association. In 1908, just two years before her death, she became the first woman elected to the American Academy of Arts and Letters. 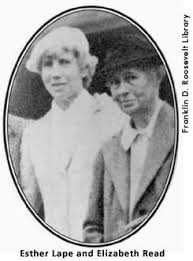 Writer Esther Lape and her life-partner lawyer Elizabeth Read lived in the house at 20 East 11th Street for more than 20 years. They were both influential activists for women’s suffrage and founders of the League of Women Voters. Read graduated from Smith College and the University of Pennsylvania Law School and worked on a number of social and political causes while practicing law and living in the Village. Lape graduated from Wellesley College and  worked as a journalist, researcher, and publicist. They were both close friends and advisers to Eleanor Roosevelt, who rented an apartment this building from 1933-1942.

Clara Lemlich was born in Russia (now Ukraine) and immigrated to the United States with her family in 1904. Census data from 1910 indicates that she lived at 278 E 3rd Street with her parents and six siblings (that tenement appears to have been combined with the adjacent tenement at 280 East 3rd Street into one building which now uses the 280 East 3rd Street address, but the original building appears to still exist behind the more modern combined façade). Clara was one of the thousands of young immigrant women working in the city’s garment industry. Before migrating to midtown in the 1920s, the garment industry was centered around present-day NoHo and the Lower East Side, both crowded immigrant neighborhoods. Garment workers usually worked in terrible conditions, for long hours, and very little pay to support their families. The 1909 strike brought attention to their plight and was supported by the Women’s Trade Union League. The WTUL was founded in 1903 to support the efforts of women to organize labor unions and to eliminate sweatshop conditions. Tragically, less than two years after the strike, the deadliest industrial disaster in the country’s history occurred when 146 workers died in a fire at the Triangle Shirtwaist Factory. The disaster led to legislation requiring safety standards and helped spur the growth of the International Ladies’ Garment Workers’ Union (ILGWU), which fought for better conditions for factory workers. Clara Lemlich became involved with the ILGWU. After being blacklisted for her labor union work, she devoted herself to the campaign for women’s suffrage, founding the Wage Earner’s Suffrage League, a working-class alternative to middle-class suffrage organizations.