On January 3, 2017, GVSHP launched our Civil Rights and Social Justice Map.  Something in the air told us there might be a hunger and need for this kind of information.  But even we would not have guessed that the map would receive over 70,000 views in that time, with its praises sung in BrickUnderground, Curbed, 6sqft, Viewing NYC, and The Architect’s Newspaper, among others places.

Launching the map has been a true labor of love for GVSHP.  We love maps; there are several hanging around our office from different eras showing different iterations of the city’s streets and topographies.  But we’re also passionate about civil rights social justice history, and the incredibly central, indispensable role our neighborhoods have played in so many such movements.

We also love engaging the public, and the map has certainly done that.  You have sent us your suggestions and ideas, and as a result, the map has almost doubled in size since its launching, with new entries added every month. 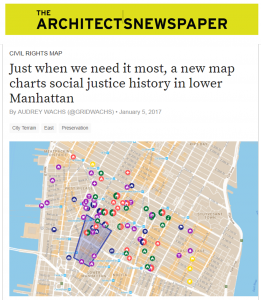 So using some previous blog posts, I thought I would share some of my favorite entries on GVSHP’s Civil Rights and Social Justice Map:

Polly’s Restaurant/Liberal Club/Heterodoxy Club, 133-139 MacDougal Street
Polly Holladay, a radical anarchist, opened her restaurant around 1915. It quickly became a popular bohemian hangout. It was located in the basement of a building that already housed the Liberal Club, another popular incubator for artists and intellectuals. It was at the Liberal Club that one of the first meetings of the founders of the NAACP took place before they moved uptown. The Heterodoxy Club, a feminist group founded by Marie Jenney Howe, discussed tactics of progressive feminism and was an early leader in feminist, lesbian, and bisexual culture. Helen Keller, Margaret Sanger, Emma Goldman, and Amy Lowell addressed the group, among others.

Howard Bennett Residence, 11 Greenwich Avenue
GVSHP research shows that Howard Bennett was born in 1911 and lived at a since-demolished tenement at 11 Greenwich Avenue for the early years of his life. At this time, the last remnants of what had been known as “Little Africa” — a predominantly African-American section of Greenwich Village centered around Minetta Street and Lane, Gay Street, and Thompson Street — still existed but was rapidly disappearing from this part of New York.  A combination of European immigration, construction projects which led to the destruction of much of Little Africa, and better housing opportunities uptown resulted in the disappearance of a once large and thriving African-American residential community, including Bennet’s own family, who moved uptown not long after his birth.  But as an adult, Bennett, while not a household name, nevertheless had a lasting impact upon our country by successfully campaigning for fifteen years to make Dr. Martin Luther King Jr.’s birthday a national holiday – the first ever honoring an African-American. In April 1970, Bennett and others presented six million signatures to Brooklyn Congresswoman Shirley Chisholm and Detroit Congressman John Conyers to make King’s birthday a national holiday, and they introduced the bill.  It finally passed in 1981 with a veto-proof majority (President Reagan opposed the bill), sadly two years after Bennett’s death. Bennett was also a leader of the 369th Veterans Association, the organization of the famous “Harlem Hellfighters.” He also served as Labor Chairman of the New York Branch of the N.A.A.C.P.

Ana Maria Simo Residence, 52 East 1st Street
Ana Maria Simo is a playwright, essayist, and novelist. Born in Cuba and educated in France, she founded the first lesbian theater in NYC, Medusa’s Revenge, in 1976. In 1992, she co-founded the Lesbian Avengers, a direct action group focused on issues vital to lesbian survival and visibility, in her apartment. The Lesbian Avengers inspired chapters all over the world, and one of its long-term accomplishments is the annual Dyke March in New York City.

Women’s Prison Association home/Isaac T. Hopper House (former Ralph and Ann E. Van Wyck Mead House), 110 2nd Avenue
Since 1874, this impressive Greek Revival house has served as the home of the Women’s Prison Association (WPA), a reform organization seeking to better the lives of women who have been through the criminal justice system. The house is named for Isaac T. Hopper, the Quaker Abolitionist and reformer who founded the WPA. His daughter, Abigail Hopper Gibbons served as the Association’s first president. In its first year alone more than 300 women passed through its doors. Still functioning today, the WPA stands at the forefront of the criminal justice reform movement to ensure that women are included in the discussion and that their needs are reflected in policy reform efforts at the local, state, and federal level.

Young Lords Location, Tompkins Square Park
The Young Lords announced the founding of their New York Chapter at Tompkins Square Park on July 26, 1969. The Puerto Rican nationalist group began as a turf gang in Chicago’s Lincoln Park in 1960, but by the mid-60s they had reorganized into a civil and human rights movement, led by Jose Cha Cha Jimenez. Puerto Rican self-determination and the displacement of Puerto Ricans and poor residents from prime real estate areas for profit became the primary focus of the original movement.

A year later, the Civil Rights and Social Justice Map seems more relevant than ever.  GVSHP continues to work to document, celebrate, and preserve and protect important sites connected to civil rights and social justice, whether its through our historic plaque program (which has marked the homes of James Baldwin, Jean-Michel Basquiat and Lorraine Hansberry; 27 Cooper Square, home of the Black Arts Movement; the site of the first meeting of Parents, Friends, and Families of Lesbians and Gays (PFLAG); and the Justus Schwab Saloon, a center of immigrant political, social, and labor organizing at the turn of the last century), or through advocacy for landmark protections for sites of significance to the LGBT civil rights movement, like Stonewall, Julius’ Bar, or the Gay Activists Alliance Firehouse, or sites in the South and East Village connected to African-American, immigrant, and social justice history.

Know another site that should be included? Just email it and all information, along with sources to cite, to info@gvshp.org – the map is updated regularly.