Today, 105 Second Avenue is a bank. The city moves on and overtakes what used to be at a given spot pretty quickly, but maybe you know that 105 Second Avenue was the home of the legendary Fillmore East from 1968 until 1971. It’s a narrow building with a brick facade and a domed roof, which used to be adorned with a sign taller than the building that read FILLMORE EAST, and an awning with the names of bands and performers like The Doors, B.B. King, Tina Turner, The Grateful Dead, Janis Joplin, Pink Floyd, Jimi Hendrix, Otis Redding, Crosby Stills Nash & Young, and The Allman Brothers, among others — the list is like an endless greatest hits of greatest hits. All were selected and curated nightly by the unparallelled Bill Graham, who owned the venue.

In 2018 we celebrated the 50th anniversary of the Fillmore East on its birthday, March 8th (see video of the celebration here, and pictures here). Bookers, staff members, photographers, and members of the Joshua Light Show, which provided the psychedelic displays that went on behind the music, shared memories, images, video, and more. In preparing for this program, I reached out and found a community here in our neighborhood (and around the world) who love the Village, love music, love each other, and love remembering the Fillmore East. I’m grateful to share some of the warm memories and memorabilia that I encountered of a place that was so multifaceted.

Before it was the Fillmore East, the building was the Commodore Theater, one of many theaters on 2nd Avenue that produced Yiddish Theater, when the area was known as the Jewish Rialto. With earlier incarnations as a movie house, by the 1930s, live Yiddish drama and vaudeville appeared onstage and the theater was rented out for meetings and benefits to left-wing groups. As Yiddish theater declined, the building became a movie house before it was purchased by Bill Graham.  The live music impresario renamed the building the Fillmore East, as a sister venue to his Fillmore in San Francisco, named for its original location at the intersection of Fillmore Street and Geary Boulevard.

In its three years, the Fillmore East defined the music scene of the East Village and so much more. Every day it was full of booking agents, administrative staff, artists, photographers, ticket-sellers, bookers, ushers, candy-sellers, artists, and countless concert attendees when the doors opened.

It was a place to catch an amazing concert: the early show was rocking, the later show was wild. It was a place to work: Bill Graham hired dozens of locals, NYU students, and others to run the shows efficiently and smoothly. It was a place of high standards and quality: the acoustics were so good that many bands recorded live albums there, and the bands were told by Bill Graham, in no uncertain terms, to bring their best or not bring anything at all. And so they brought their best to the Fillmore East. It was a family: so many folks of all ages felt at home, where enjoyment and an intimate encounter with talent were prioritized.

Bill Graham’s savvy and knowledge were caught on tape a number of times, including in the documentary “Last Days at the Fillmore;” in an interview in 1974; and in this chat on video in 1984, during which he reflects on his time there. I was gifted a nice bit of video called “The House that Rock Built,” a spot about the Fillmore East that ran on 60 Minutes in 1970, thanks to a friend of GVSHP and ephemera collector Mitch Blank (enjoy — it takes about 15 seconds to start but is quite a time capsule). It’s got an amazing conversation with Bill Graham and some incredible audio of a performance and interview with Janis Joplin, covering everything from politics to business to her favorite pre-show drink. My favorite part is when the newscaster, Tom Reynolds, explains the rise of the Fillmore East as a phenomenon “for a new generation of affluent young people who can afford to pay 3, 4, and 5 dollars a ticket.” Imagine seeing Janis Joplin for $5?

According to the Fillmore West, which is still open and showcasing live music in San Francisco, “Bill Graham was a veteran of the artistic community, but his greatest talents were his keen business acumen and his ability to organize events, creating comfortable and safe atmospheres without stifling the creative energies around him. Maintaining high aesthetic standards and calling on limitless personal energy, Bill pulled together a workforce that functioned as a family, and was a prime nurturing force.” Bill Graham was a native New Yorker, and this description of him is one that I think could also be a description of the Village and East Village themselves, especially as relates to the arts.

When I asked some of the folks I spoke with about why the Fillmore East was only open for three years, most agreed that, after Woodstock, larger arena-like venues became more lucrative for rockers. The Fillmore East seated 2,654 people, so a band could play three rigorous nights at the Fillmore in a row, or they could play one arena for one night and reach more than they’d reach in three nights at the Fillmore. The world of music was changing as the world was changing, too, and Bill Graham moved his efforts back to running bigger music festivals.

In 1972, Jerry Fuchs bought the building from Bill Graham and continued to stage concerts there, calling it Villageast. In 1974, Barry Stuart bought the building and called it the NFE Theatre (“NFE” stood for “New Fillmore East”), then named it the Village East again, supposedly due to objections from Bill Graham over the use of the Fillmore name. From 1980 to 1988, the building was home to The Saint, a private gay superclub. As of 2013, the former lobby building is owned by the Apple Bank for Savings, which has a branch at street level, and the rest of the interior of the auditorium has been demolished and replaced with an apartment complex, Hudson East, with its entrance at 225 East 6th Street.

In October 2014, the Greenwich Village Society for Historic Preservation unveiled a historic plaque on the building at a ceremony featuring Joshua White of the Joshua Light Show and critic/guitarist Lenny Kaye. 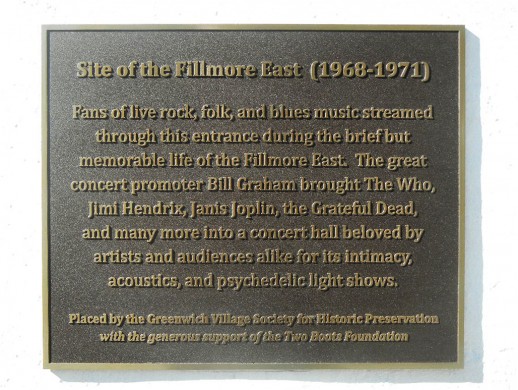 Though I wasn’t even a glimmer in my parents’ imaginations when the Fillmore was a center of rock music, my time with those who made the place run — employees and patrons alike — has helped me to feel welcomed into a community that is warm, wild, fun-loving, and delighted to share in its Village history.

Thanks especially to Amalie Rothschild, Mitch Blank, and Joshua White for the photos, video, time, and generosity. And to the incredible Anthony DeCurtis, for giving this all a frame.

One response to “Rock On, Fillmore East!”