Diane Arbus was born on March 14, 1923, and died by her own hand a mere forty-eight years later on July 26, 1971.  The acclaimed and celebrated photographer’s body of mid-20th century work focused largely on people marginalized by “mainstream” society.   Arbus’s first Greenwich Village address was a rear carriage house at 131 1/2 Charles Street where she moved in 1959 (read more about the house’s history from the NYC and NYS landmark designation reports on our website here).  In 1968, she moved to 120 East 10th Street in Renwick triangle, just around the block from GVSHP’s office (learn more about the history of Renwick Triangle and the surrounding St. Mark’s Historic District here). In 1970 she moved to the since-landmarked Westbesth Artists Community, where she committed suicide. 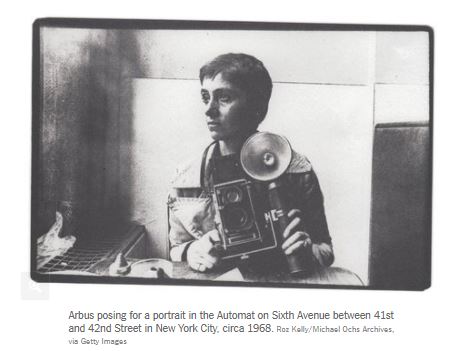 Arbus’ photography received great accolades as well as significant criticism, including charges of exploitation of her subjects.  Although she did not want to be known as a “photographer of freaks,” it is how she came to be known for to many.

“Freaks was a thing I photographed a lot. It was one of the first things I photographed and it had a terrific kind of excitement for me. I just used to adore them. I still adore some of them, I don’t quite mean they’re my best friends but they made me feel a mixture of shame and awe. There’s a quality of legend about freaks. Like a person in a fairy tale who stops you and demands that you answer a riddle. Most people go through life dreading they’ll have a traumatic experience. Freaks were born with their trauma. They’ve already passed their test in life. They’re aristocrats.”  Diane Arbus: An Aperture Monograph (New York: Aperture Foundation, 1972)

Arbus’ legacy and place in history has recently been reconsidered by the New York Times.  Since 1851, the Paper of Record has published thousands of obituaries.  The vast majority chronicled the lives of men, mostly white ones; even in the last two years, just over one in five of their subjects were female.  To rectify this inequality, they recently launched an initiative to publish the obituaries of notable women that they missed. Diane Arbus is among them. 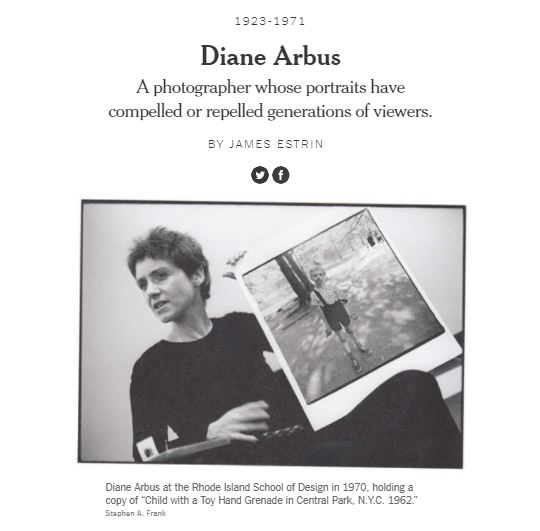 Diane Arbus was a daughter of privilege who spent much of her adult life documenting those on the periphery of society. Since she killed herself in 1971, her unblinking portraits have made her a seminal figure in modern-day photography and an influence on three generations of photographers, though she is perhaps just as famous for her unconventional lifestyle and her suicide.

Her work continues to spark fierce debate among photographers and intellectuals. Are her portraits — of circus performers, transvestites, mentally disabled people and others — empathetic acknowledgments of a shared humanity, or are they exploitative depictions that seize upon their subjects’ oddities to shock her audience? After her death, many critics who fancy themselves armchair psychiatrists have tried to analyze her impulses, searching for the role these encounters played in Arbus’s psyche.

You can read the rest of her obituary here.

Arbus was of course also very found of photographing subjects in her Greenwich Village neighborhood, with some of her most iconic images taken in Washington Square Park and on Hudson Street.

You can read more about Diane Arbus in our “Strange Bedfellows” series here.