The former Public School 64, which once housed the CHARAS community and cultural center, was designed by master school architect C.B.J. Snyder in the French Renaissance Revival style in 1904-06.  And on June 20, 2006 Landmarks Preservation Commission designated it an official New York City landmark, saving it from planned demolition by its developer/owner. 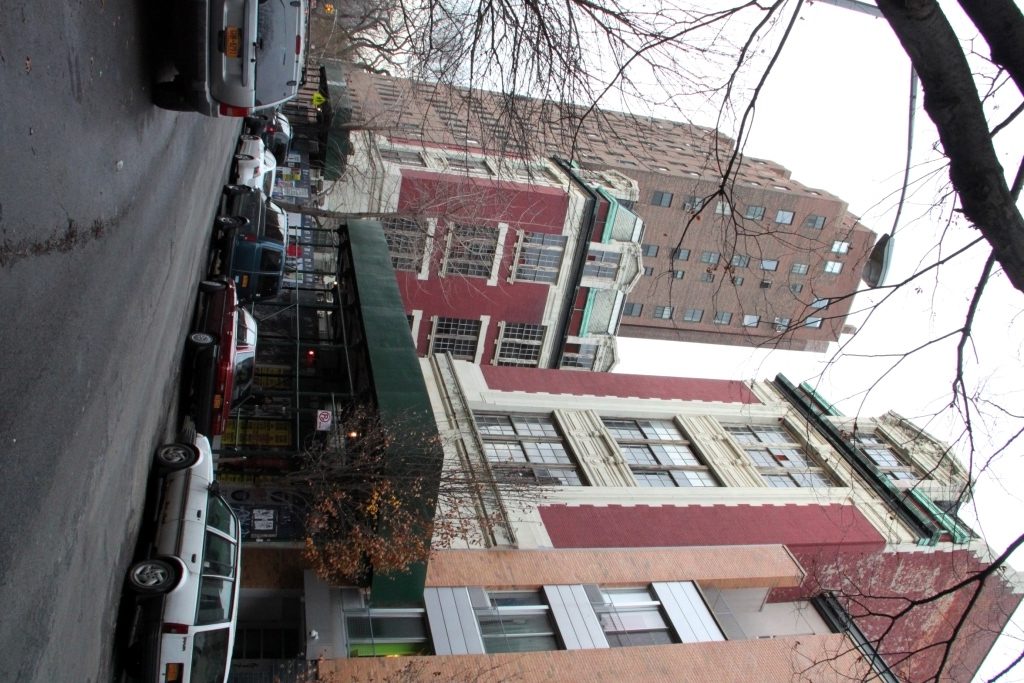 The former P.S. 64 is located at 350 East 10th Street/605 East 9th Street, just east of Avenue B.  A mid-block ‘H-plan’ building, P.S. 64 was a rare Snyder school designed in the French Renaissance Revival style.  The building’s design was not repeated for any other of Snyder’s schools, which was also unusual.

From the building’s landmark designation report:

Architecturally, P.S. 64 is a unique example of Snyder’s work in the French Renaissance Revival style. Because Snyder was under severe pressure to produce large numbers of school buildings to house the fast-growing population, he occasionally repeated similar designs in other locations, but there is no school design like P.S. 64. Its keyed surrounds, slate-covered mansard roof, terra-cotta moldings and keystones, contrasting brick and stone materials, and pediments filled with fruit and foliage resulted in a visually prominent school building. This distinguished structure and its distinctive plan and siting in the middle of a crowded neighborhood of tenement buildings helped create a strong statement about the importance of education and the importance of the building itself in the crowded immigrant neighborhood. P.S. 64 was designed while Snyder was at his creative and inventive peak, and is an unusually intact example of a school building from this early period.

Discussing the building’s fate in the 1970s after it stopped being a school and lay empty and abandoned, the designation report states:

At this time, a local nonprofit organization, Adopt-A-Building, was searching for space for its workers and trainees. This group had been started by the Rev. Norman Eddy and the New York City Mission Society in East Harlem in 1970 to help local residents repair and restore their buildings when owners had let them fall into disrepair or had abandoned them.  Their goal was to train and empower residents of blighted neighborhoods to improve their own buildings and their communities and they became part of the widespread urban homesteading movement of the 1970s. Adopt-A-Building had received a large grant to train local young people in the construction trades and P.S. 64 provided a perfect project for them. The trainees moved into the abandoned P.S. 64 and began working to make the building habitable again so that the administration and programming staff could move in (which they did in late 1978).

Beginning in 1979, another existing local group, CHARAS, occupied the western wing and theater of the school building. CHARAS and Adopt-A-Building formed a new corporation, El Bohío (a word that translates as “hut” and signifies a friendly public space for community use) to sign a lease for the building with New York City, a lease that specified that the building be used for community purposes. CHARAS was a continuation of a previous group called the Real Great Society. This had been formed in 1964 by five young Puerto Rican men who had been leaders in a youth gang and had decided to put their skills to more positive uses, fostering community-based urban ecology, arts and culture. At P.S. 64, CHARAS sponsored many of its own programs such as after-school programs and physical fitness programs for local children. Continuing the role of the school as a community center envisioned by the original architect, they hosted cultural performances in the auditorium. 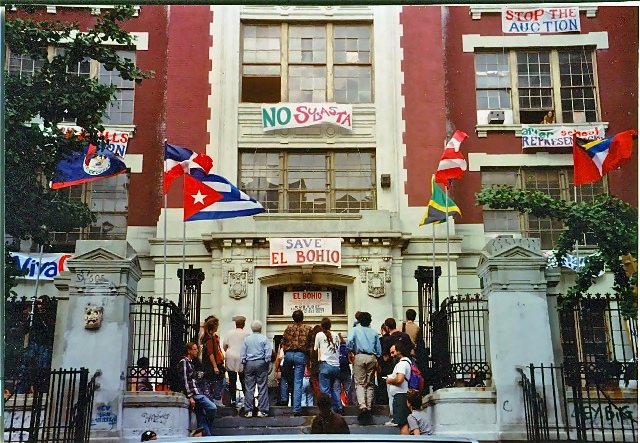 CBH Snyder schools are so special, we did a public program about four examples of them called ‘A Tale of Four Schools,’ which you can watch or listen to here.  Unfortunately, one in the Bronx was demolished after years of neglect — a fate no one wants to happen on East 9th and 10th Street.

On July 20 1998, the Giuliani administration sold the building to a private developer, and despite massive protests and attempts to prevent the sale, CHARAS/El Bohío was evicted in 2001 and the building has remained empty since. With support from GVSHP, community groups, and local elected officials, P.S. 64 was landmarked by the city in 2006, but the building’s future still remains uncertain.

With activists’ urging, Community Board 3 passed a resolution December 17 of 2013 (for full text, see #2 here, p. 5) requesting that the incoming de Blasio administration return the building to the community.  The resolution is elucidating as to the handling of the property.

At a Town Hall meeting just last year in the neighborhood the Mayor said,

“…the decision made a long time ago by the Giuliani administration was a mistake. For the Giuliani administration to put that building into private hands failed miserably, and we’ve seen the negative effect that has had on the community. So I’m announcing tonight, the city’s interest in re-acquiring that building. We are ready to right the wrongs of the past and will work with Council member Mendez and her successor (almost certainly Carlina Rivera) to get that done.”

We will see what happens to the fate of this important landmarked building.

One response to “A Landmark’s Long Fight for Life”