As we enter July, it’s not hard to notice that some of the dates align with some neighborhood intersections.  In honor of today’s date, we are taking a look at some of the buildings and history around the intersection of 7th Street and 2nd Avenue . 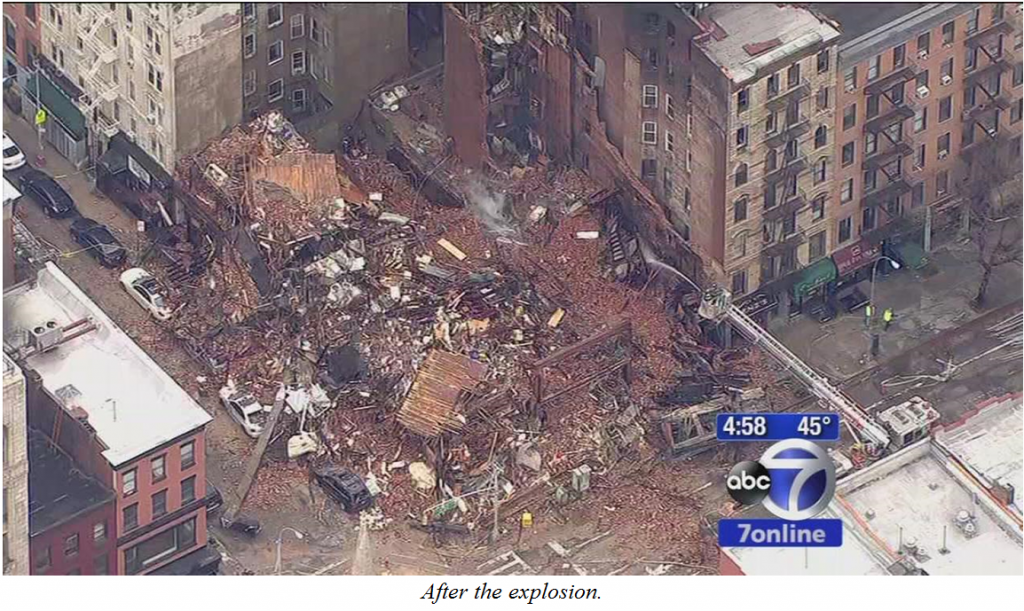 On March 26, 2015, an explosion and fire led to the destruction of three buildings at 119, 121, and 123 Second Avenue. Tragically, two lives were lost, more than a dozen people were injured, and many people lost their homes, businesses, and livelihoods.  At 121 Second Ave., an illegal gas hookup had allegedly been installed to evade detection and provide the reported $6,000 a month tenants upstairs with service.  Two cenotaphs still stand on the plots where the buildings once stood, one for patron Nicholas Figueroa and one for employee Moises Ismael Locón Yac, haunting reminders of this terrible tragedy.

Construction on 119-121 took place approximately around 1886, while 123 was constructed in 1834 by developer Thomas E. Leary.  In 1899, both 119 and 121 were raised one story, while in 1913, architect George Frederick Pelham applied to raise the building 123 two stories.  Because these three buildings are located within the East Village/Lower East Side Historic District, new construction has to meet the approval of the Landmarks Preservation Commission.  A hearing is scheduled at the LPC on July 10th to discuss the current plans for a new seven-story building to be constricted at the former site of 119-121 Second Avenues.  More information on this hearing can be found here.

This six-story building was erected in 1928 and designed by Ralph H. Segal for Saul Birns.  When it was constructed, the building contained ninety-four suites of one to four rooms. Originally meant to be a bank, store, and office building, the building was occupied by by the beloved deli restaurant Ratners for many years. It was a nighttime hangout for rock-n-roll legends like Janis Joplin, Jim Morrison, and The Grateful Dead.  The structure is now occupied by New York University.

This eight-story tenement was built in 1901, designed by architect Michael Bernstein, who also designed many other buildings in the East Village. The two tenements at No. 104 and No. 106 Second Avenue were built at the same time, but they are to be read as one large structure.

The building features a tripartite vertical configuration and rounded corner at the intersection of Second Avenue and East 6th Street. The first and second stories are covered with rusticated limestone, with a round-arched entry enframed by molded archivolts and pilasters. The upper stories feature red brick and terra-cotta details, including window enframements with garland and foliate sculptural elements, broken pediments, and scroll keystones.

The cornice has been removed and covered by metal panels. Thestorefronts have been reconfigured or infilled.

This three-to-five-story Gothic Revival-style church was built in 1891-92, by the Collegiate Reformed Protestant Dutch Church.The Middle Collegiate Church is constructed entirely from Indiana limestone. Its facade is three bays wide, featuring a gabled three-story central bay, a 130-foot hexagonal limestone spire on thefive-story tower of the northern bay, and another hexagonal limestone spire on the four-story southern bay. Other features include a peaked entry vestibule with pointed-arched main entrance, pointed-arched window openings, elaborate stained-glass windows which are possibly made by Tiffany, and a rusticated limestone surface.