In our series Beyond the Village and Back, we take a look at some great landmarks throughout New York City outside of the Village, the East Village, and NoHo, celebrate their special histories, and reveal their (sometimes hidden) connections to the Village. 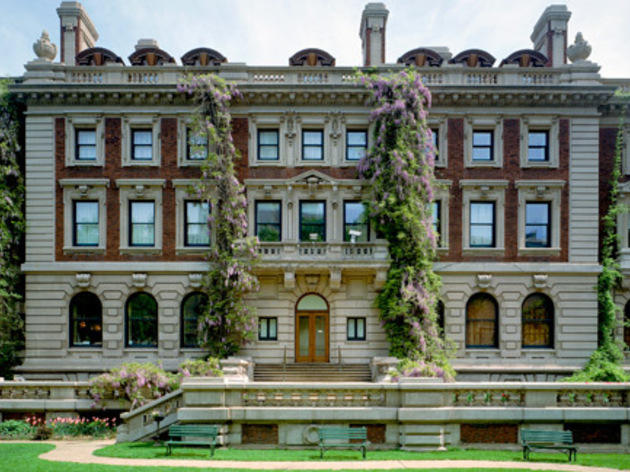 The Cooper Hewitt Smithsonian Design Museum at 2 East 91st Street is a renowned museum and institution, the only of its kind in the United States, born of a long history and connection between philanthropy and industry. The landmarked building is an exemplary bit of ornate, turn-of-the-20th-century architecture, and today we explore its history and ties to the Village in our latest Beyond the Village and Back.

In 1898, Andrew Carnegie and his wife Louisa purchased land for their family’s home “far north” of the center of New York City and where they had previously been living. This new space would allow them a mansion of much greater size, along with a private garden. Designed by the firm Babb, Cook & Willard, the Carnegie family moved into their grand new home in 1902. The mansion put its neighborhood on the map — the lower 90s west of Lexington Avenue is still called Carnegie Hill to this day.

The Georgian style Mansion boasted a modern steel-frame construction, the first private residence in the United States to use this method. It was technologically advanced, too: multiple electric Otis elevators, a fully electrified laundry, an extremely sophisticated air conditioning system capable of heating, cooling, and humidifying individual rooms, and a cellar coal car that traveled over a miniature train track to transfer fuel from a storage bin to enormous twin boilers were installed.

The mansion had 64 rooms on five floors, the top of which was for servants’ quarters. There were multiple libraries, parlors, sitting rooms, bedrooms, halls, pantries, and skylights. The family library on the second floor, known also as the Teak Room, was made entirely of intricately carved Teak wood, from India or Myanmar.

Andrew Carnegie spent 20 years in his mansion before he died in 1919. His wife, Louise Carnegie, remained in the mansion until she died in 1946. Louise left the mansion to the Carnegie Corporation, which leased the building to Columbia University’s School of Social Work in 1949. The school remained in its grand home until the mid-1960s. In 1966, the Carnegie Mansion was named a national historic landmark, bestowing upon it a great honor, but not protecting it from potential demolition. Like many great Historic New York City buildings in the 1960s, when tastes and uses were rapidly changing, the Carnegie Mansion’s fate was in doubt. Some worried it would go the way of Penn Station and other no-longer-used mansions, succumbing to the wrecking ball.

Fortunately, a Village connection rooted in a longtime friendship of Andrew Carnegie’s helped save the mansion by giving it new life.

Andrew Carnegie and Peter Cooper were contemporaries, fellow industrialists, robber barons, philanthropists, and friends.  Cooper lived in the Village, and in September 1859 opened Cooper Union for the Advancement of Science and Art at 7 East 7th Street. Cooper Union was meant to be “a free institution of the working classes of New York and its vicinity, in science and art.” Carnegie famously wrote the Gospel of Wealth in 1889, citing Peter Cooper’s Institute as an example of using wealth to elevate the poor by giving them the means to improve their lives. 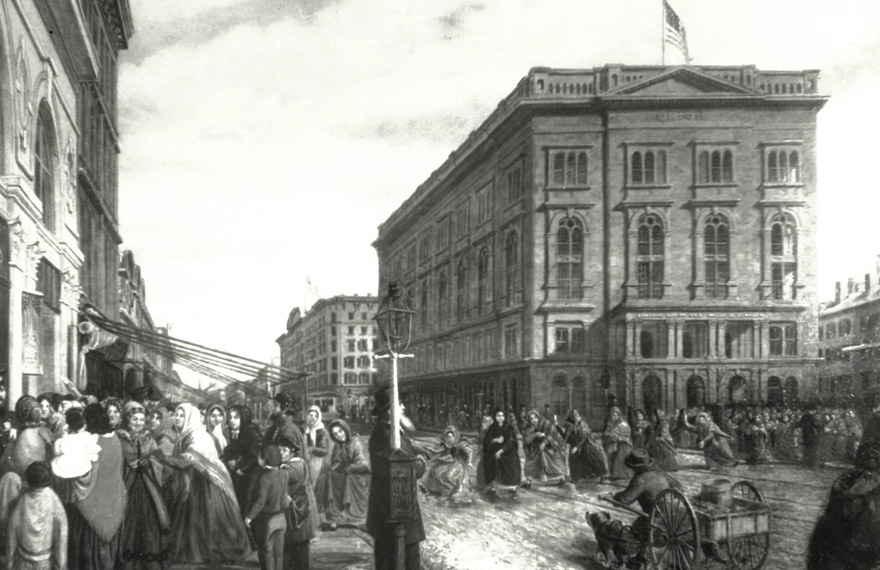 Museum and Mansion, Coming Together

The Hewitt sisters’ downtown museum thrived throughout the early 20th century after its founding, as Andrew and then his widow Louise lived comfortably uptown. The Cooper Union Museum’s first curator was hired in 1933. For another thirty years, it remained in its downtown home.

In this way, the museum founded in the Village by Peter Cooper’s granddaughters came to be housed uptown, at the former mansion of Cooper’s friend Andrew Carnegie. Mansion and Museum made their agreement, and the Museum set about turning the mansion into a museum. A priority was to carefully preserve the character and unique features of the structure as it was renovated.

Once the museum moved into the mansion, the building had to undergo many renovations to accommodate it. The first renovation by Hardy Holzman & Pfeiffer Associates was completed in 1976, and on October 7 the Cooper-Hewitt, The Smithsonian Institution’s National Museum of Design, opened. The second round of renovations was overseen by Villager James Polshek’s firm, Polshek & Partners, and was completed in 1988.

The museum closed for its third renovation between 2011 and 2012. Architects Beyer Blinder Belle Architects and Gluckman Mayner increased the Cooper-Hewitt’s exhibition space. The museum also moved its library and other collections to an off-site storage facility.

“What I admire so much about the new Cooper Hewitt is how they have taken special care to treat this Victorian behemoth as a design challenge in and of itself,” said Heather Ewing, author of Life of a Mansion, a history of the Carnegie Mansion.

In 1974, the former mansion was designated a New York City landmark, ensuring its permanent preservation.

In 2014 there were more renovations made to the second and third floors of the building. The following year, the Mansion was awarded LEED Silver certification. Then, in 2016, New York Landmarks Conservancy honored Cooper Hewitt with Lucy G. Moses Preservation Award.

Today, the Cooper Hewitt is the only museum in the United States devoted to historical and contemporary design. Its collections and exhibitions explore approximately 240 years of design aesthetic and creativity. All with roots firmly planted in the Village.

According to the Museum’s website, “Cooper Hewitt’s exhibitions feature a rich mix of historic and contemporary design objects from our permanent collection, special exhibitions, and dynamic interactive experiences. We also have an exciting calendar of events, including hands-on workshops, talks, and family programs.” Learn more here!