Last week we put out a call for help to solve mysteries regarding the locations of some images from our Historic Image Archive‘s most recent addition, Carole Teller’s Changing New York, Part 4. Some were solved this week by readers, and some by staff. Some still remain unsolved… if you think you know the location of any of our “unidentified” or “unknown” photos, please email us at info@gvshp.org.  Here’s how we solved (and partially solved) the mystery behind the locations of the following two images.

Having a street number or name of a business is always a good start, although sometimes it’s not always definitive. In this case, you can make out a “244” on the left, next to a business name. While we could not find the business name anywhere, the number 244 was a nice clue. There are not many long streets in the Seaport area or financial district, where we knew this image was taken. Most of the streets, especially the more numerous east-west streets, only go up to about the number 100. Based on this we were able to determine this building was likely 244 Front, Water, or Pearl Streets.

We immediately eliminated 244 Pearl Street (read the next photo mystery for further explanation). At first glance, 244 Front Street looked like a good option — the buildings (most of which still stand today) are of a similar material, height, style and vintage to those in the photo.

However, upon closer examination, it didn’t add up. The buildings in our mystery image had two bays (rows of windows), and the heights and rooflines were slightly off. This left 244-252 Water Street, just a block away, which unfortunately is a large parking lot today.

Unable to compare to the existing buildings, we first looked at some historic maps.  The 1923 Bromley map shows 244, 246, and 248 Water Street are slightly narrower than 244-248 Front Street Street — a good sign.

Then we went digging for historic images of the buildings. We soon realized that Carole herself had taken an image that included 244-252 Water Street, which was found in Part I of our Carole Teller’s Changing New York Collection.

244-252 Water Street, as well as the rest of that block, are in the center of the frame on the right side of the street.  But at this distance, it’s impossible to really confirm that these are the same buildings as in the original mystery image (thought the fact that Carole took this image which included those buildings confirms she was at the very least photographing around them, at what appears to be around the same time as the mystery image).

But then we hit the jackpot:

In this earlier image from the NYPL, taken from almost the exact same vantage point as Carole Teller’s image, you can see great enough detail on the buildings at 244-252 Water Street to be able to confirm that these are the same buildings in the original mystery image.

The original mystery image shows #244 at the left as a five-story flat-roofed structure, with two four-story plus sloped roof with single dormer structures to its right, a vacant lot about the width of each of these structures, followed by a four-story structure to the right at #252.  Based upon the facades its apparent that #252 was built at the same time and in the same style as #’s 246 and 248 to its left, and thus while you can’t see it in the mystery photo, likely had the same sloped roof with single dormer just outside the frame (#244 also looks to have likely been built as part of the same row with the same form, but probably had a full fifth floor added at some point).

What we see in the 1939 NYPL photo is a five-story structure that looks a lot like #244, with four four-story-plus sloped roof and single dormer structures to its right at#246-252 (some of the single dormers are visible anyway, while some are blocked by the awning from the other side of the street).  This would make it appear that #250 was demolished sometime between 1939 when the NYPL picture was taken and the early 1960s when Carole Teller’s mystery picture was taken.  Later, all the buildings on this block of Water Street between Beeckman Street and Peck Slip were demolished prior to this area being designated the South Street Seaport Historic District in 1977.

We would love to confirm the location of the building below, as several readers notified us that 250 Pearl Street was the Air Cargo office of KLM Royal Dutch Airlines in the early 1960s. However, we are not ready to sign off on this location just yet, as KLM likely had many offices around the City at that time, being one of the most prolific carriers of its day. 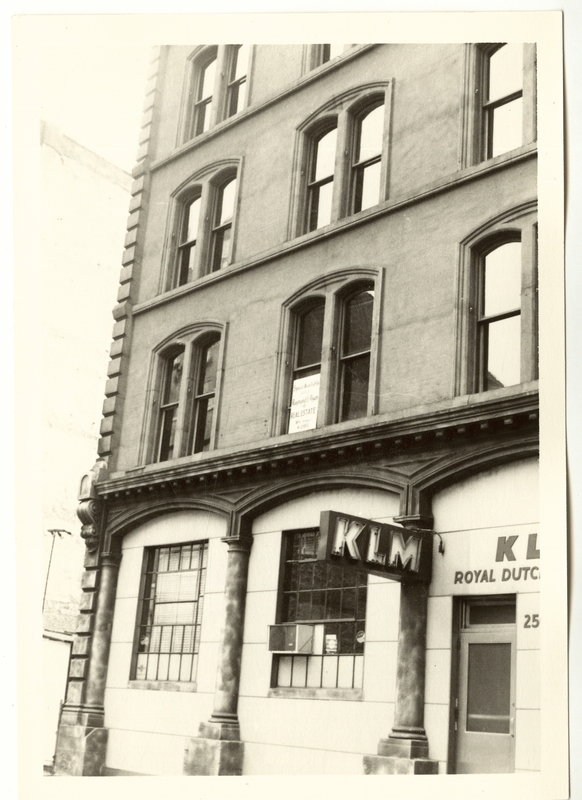 We can see the “25” in the right side of the frame, likely indicating 250 Pearl Street. However, we have been unable to find another photo of 250 Pearl Street to confirm. While the image above looks like a corner building, the 1923 Bromley Map shows 248-250 Pearl Street as a mid-block, through block building.

However, between 1957 and 1969 demo permits were issued for all the buildings north of and including 250 Pearl Street. We were then able to find an ariel shot from 1966 that shows 250 Pearl Street still standing while the neighboring buildings had already been demolished. So our mystery image could be 250 Pearl, taken in the short period when 250 was still standing following the demolition of all its neighbors. This area is now covered entirely by one building built in 1973.

Please let us know if you have any ideas about these image locations or any of those in our previous blog.