GVSHP’s historic image archive reflects an amazing cross-section of NYC history. Many of the images arrived to us unidentified in terms of location. We have solved many historic photo mysteries including identifying the location of this one at 15 Carmine Street, this one on St. Marks Place and 2nd Avenue, and these South Street Seaport images. However, a few mysteries linger, and some may never be solved.

We have been wondering about the image below for months. We can now cross it off our list thanks to one of our readers, Eric, who happens to be a cousin of Carole Teller, the amazing artist who donated a trove of hundreds of historic photos to the GVSHP image archive. 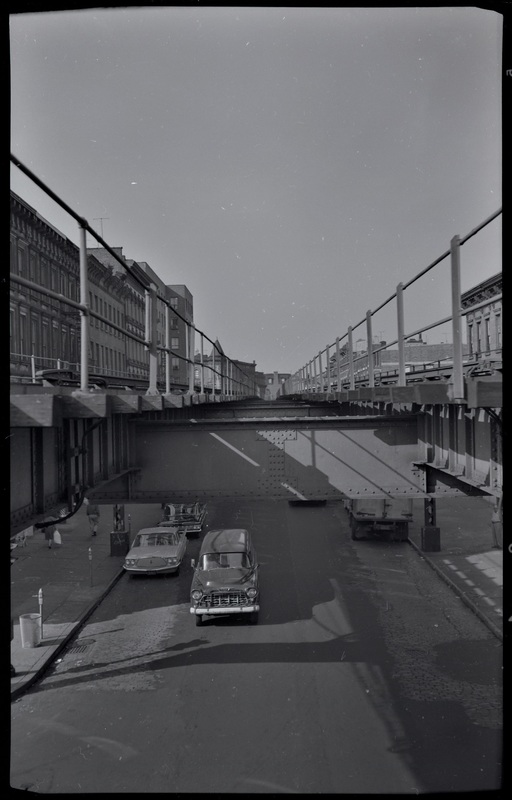 We always thought this was somewhere in Brooklyn, but we could never pinpoint the location. Thanks to some excellent sleuthing, now we know.

Currently, 40% of the NYC Subway system is above ground on elevated lines like that seen in the photo. However, that percentage and the overall miles of elevated train lines used to be much higher. By the time this image was taken (likely in the early-1960s based on the cars and other photos taken in the collection) most of the elevated lines in lower Manhattan had been dismantled, including those on Second, Third, Sixth, and Ninth Avenues. Those original elevated trains were slower, smaller, and ran on old infrastructure while the underground subway was comparably sleek, new, and clean.

Eric first noted the“I” pattern of rivets in the center of the girder holding up the tracks. He looked at various pictures of existing elevated train lines throughout the City but he couldn’t find a match. Then he looked at photos of the demolished Myrtle Avenue El, and came across the photo below showing the same “I” rivet formation (see the far right of the picture).

Eric then used the row of buildings in that image and compared it to Carole’s photo. The key was slightly higher building at the right edge of the photo, with the prominent pediment that has a relatively deep overhang over the building’s façade. The same building is seen in Carole’s photo, with the pediment appearing right above the safety fence along the el tracks. Luckily, the builidng in the second photo are the exact same ones as those in Carole’s photo. But what street corner of the several mile long Myrtle Avenue line is this?

The former Myrtle Avenue MJ line once ran all the way through Brooklyn, over the Brooklyn Bridge, and terminated at City Hall. This section of the elevated line, which ran from Broadway to Jay Street, closed on October 4, 1969 and was demolished soon after. With the closure of this elevated line, the MJ line cased to exists, and is now the M line, which travels from Manhattan over the Williamsburg Bride, up Flushing Avenue, turning left on Myrtle Avenue (where the old MJ line once ran), and out to Middle Village, Queens.

Eric then used Google Streetview to navigate the route, eventually finding a match at the Corner of Washington and Myrtles Avenues. We had to go back to the December 2012 Streetview to get a clear shot without trees or scaffolding obstructing the view.

The El was closed and demolition apparently began in 1969. We thank Eric and all our readers for solving these mysteries!

We’ve still got a few more historic image mysteries to solve that are every bit as ‘riverting’ as the Myrtle Avenue El.  Let us know if you can determine the location of any of these: