The Beat poets, inextricably linked with the Village and East Village, materialized in the post-WWII American of white picket fences to celebrate all things messy, countercultural, drug-addled, disenfranchised, and unstoppably vital. East Villager Allen Ginsberg’s poem “Howl” was an anthem of this movement, with its power, breathlessness, and breadth of content. And on October 7, 1955, Ginsberg made history reading and performing “Howl” for the first time at the Six Gallery in San Francisco.

The event where Ginsberg first read Howl was a fateful evening, promoted by a publicity postcard that read:

Six poets at the Six Gallery…. all sharp new straightforward writing — remarkable collection of angels on one stage reading their poetry.

The Six Gallery was founded by artist, gallerist, and educator Wally Hedrick, Deborah Remington, poets John Ryan and Jack Spicer, and others. Before it was a gallery, the building at 3119 Fillmore Street was an auto repair shop. In 1995, literary pilgrim Tony Willard wrote of the location, “3119 Fillmore stands in the middle of block’s west side, canary yellow with royal blue awnings, black flower boxes full of exuberant geraniums at the second-story windows.” The address no longer exists, but a podium and plaque commemorating the 50th anniversary of the reading of “Howl” stand on the sidewalk in front of a restaurant at 3115 Fillmore.

I saw the best minds of my generation destroyed by madness, starving hysterical naked,
dragging themselves through the negro streets at dawn looking for an angry fix,
angelheaded hipsters burning for the ancient heavenly connection to the starry dynamo in the machinery of night,
who poverty and tatters and hollow-eyed and high sat up smoking in the supernatural darkness of cold-water flats floating across the tops of cities contemplating jazz…

“Howl,” as a poem, makes me think very much of Walt Whitman, whom Ginsberg often called an inspiration. The lines are long, exultant, and full of love and syllables. The content meanders in every direction around the country, naming cities and towns and regions, making America feel very large but also deeply intimate and knowable. Similarly cataloged in the poem are Ginsberg’s many partners’ and friends’ collective sexual, experimental, and drug-addled escapades. The experiences are the point, but they’re also a tool. The catalog uplifts those whose experiences were not represented in the broader society of the mid-1950s. Ginsberg sang the downtrodden, howled the words urgently needed to be said, and elevated the devastated and disenfranchised with the lyrical music of his poetry.

…said fellow poet Laurence Ferlinghetti. “When you hear it for the first time, you say, ‘I never saw the world like that before.’” Ferlinghetti asked Ginsberg if he could publish “Howl” the very next day.

“Howl and other poems” was published in 1956 by Ferlinghetti’s City Lights. The introduction was written by the great poet William Carlos Williams. Williams and Ginsberg both were from Paterson, New Jersey – the town is mentioned specifically in “Howl.” Williams is considered the father of Imagist poetry, insisting that the greatest meaning came from how a poet describes something, rather than stating their feelings or concepts outright. This was certainly not Ginsberg’s method. Williams, who practiced pediatrics out of the home he shared with his wife and children, was far from a road-tripping wild Beat poet. However, his experimentation with form and object made him an inspiration to the Beats. His introduction to “Howl” ended: “Hold back the edges of your gowns, Ladies, we are going through hell.” 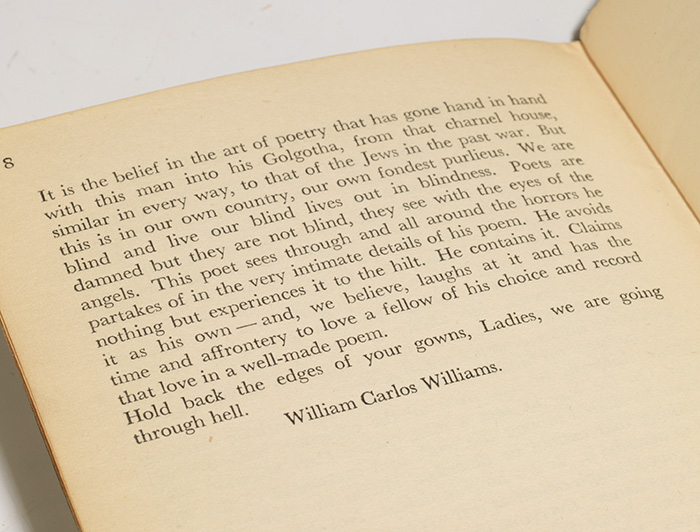 In 1957, “Howl” went into a second printing. The books were printed in London, and when they arrived in the U.S. in their shipping crates, Customs seized the books as obscene materials. The United States pressed charges; Ginsberg’s risqué content did not sit well. Police subsequently arrested Lawrence Ferlinghetti and bookseller Shigeyoshi Murao, who, along with “Howl” itself, stood trial for obscenity. At the trial, nine literary experts testified on the poem’s behalf. The American Civil Liberties Union argued the case on First Amendment grounds and won. California State Superior Court Judge Clayton Horn declared that the poem was of “redeeming social importance.”

And if Ginsberg’s poetry hadn’t already galvanized a movement, the case certainly did so. The insistence on free speech empowered the Beat generation to speak and write their truths. That included the infamous “Beatnik Riots” here in Greenwich Village.  It’s easy to see why Ginsberg spent his life writing, reading, and galavanting in the Village – there was no place like it for the energy, celebrations, crazy angels, love and madness, gritty streets, and characters whose songs he sang.