Village Preservation’s East Village Building Blocks, our web-based tool which provides information on each property in the East Village, has been wildly popular since its release just over a month ago. Equally popular has been the accompanying, in-depth report on the East Village by architectural historian Francis Morrone entitled, “A History of the East Village and its Architecture” and you can see it online here or order a hard copy here. 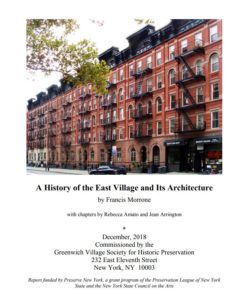 This 246-page report documents the East Village’s history from Dutch settlement in the 17th century, to its development in the 19th century as a prosperous merchant burg and then immigrant gateway, to its evolution in the 20th century as an epicenter of abandonment and blight to a mecca for cultural innovation and rebirth, and its struggle in the 21st century to maintain its identity in the face of renewed popularity and success. This vivid, illustrated report was funded by a grant from Preserve New York, a grant program of the Preservation League of NY State and the NY State Council on the Arts.

The author, Frances Morrone, is an architectural historian, writer, lecturer and tour guide who writes extensively on architectural history and decoration. His publications include The New York Public Library: The Architecture and Decoration of the Stephen A. Schwarzman Building (2011); architectural history guidebooks to Brooklyn, Philadelphia and New York City; Ten Architectural Walks in Manhattan with Matthew A. Postal (2009) and, The New York Urban Landscape Guide (2012). Highly regarded for his walking tours, he was named in one of the 13 best tour guides in the world (one of 2 in the United States) by Travel + Leisure magazine. His membership on a number of advisory boards includes the Institute of Classical Architecture & Classical America, Brooklyn Historical Society and the Municipal Art Society. He is the recipient of a lifetime achievement award from American Friends of the Georgian Group and the Excellence in Teaching and Longer Service Recognition Awards from NY University.

The first chapter in the East Village Report provides an overview of the development of the area and the architecture which reflects that development. Subsequent chapters go into more detail on the different building types which make up the East Village including Row Houses, Tenements, Institutional Buildings, Commercial and Industrial Buildings, Houses of Worship, Buildings for Art and Artists, Public Schools and Public Housing. Here is a sampling: