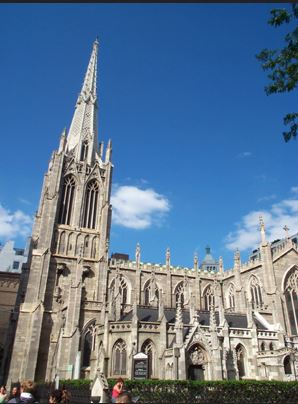 Did someone say FREE CONCERT?  Yes, indeed we did!  Celebrating the 125th anniversary of its historic choir, Grace Church is offering a free concert featuring current choir members and alumni, as well as professional singers, at 7:00 PM on Friday, April 26th at Grace Church, 805 Broadway at 11th Street.  The music will include compositions by Randall Thompson, Barry Rose, and Leonard Bernstein, among others.

While we have written previous posts about the glorious Grace Church, here is a brief refresher on its history.

Grace Church has been an important part of the fabric of New York City for over two hundred years. The first services were held in a modest building at the corner of Broadway and Rector Street, some two miles south of where the church sits today. For a quarter century, the church flourished in its downtown location, engaging in important community outreach throughout Lower Manhattan, including the founding of a charity school for girls and another for boys in 1823.

By 1834, the city was moving northward, and Grace Church risked being left behind by the growing metropolis. The congregation determined that a move northward was necessary, and in 1843 a site was chosen and the property was purchased in what was then an apple orchard owned by Henry Brevoort, Jr. at Broadway between Tenth and Eleventh Streets.

The commission to design the church was given to a civil engineer who had never built anything on such a scale. James Renwick, Jr.’s largest previous work had been a part of the Croton Reservoir at 42nd Street.  While Renwick had not yet established his reputation, he had a family background full of talent and influence – not to mention family members on the church’s Vestry who influenced the decision to hire him.

Due to significant financial strain, the original church was far less ornate than the design called for.  The original windows were of lightly tinted glass and the original steeple was made of wood, not marble. Over the years, the ornate stained glass windows that depict stories from the Bible that you see today and the marble steeple that towers above were eventually added.

Now on to the history of the choir.  The tenure of William Reed Huntington, the sixth rector of Grace Church, marked a significant turning point in the life of the Grace community.  Huntington was a firm believer in the Social Gospel (The Social Gospel was a movement in Protestantism that applied Christian ethics to social problems, especially issues of social justice such as economic inequality, poverty, alcoholism, crime, racial tensions, slums, unclean environment, child labor, inadequate labor unions, poor schools, and the danger of war). He sought to strengthen Grace Church’s commitment to the community by building new chapels around Manhattan and offering additional classes for the residents of the neighborhood. The green space to the south of the chantry is named for Huntington.

William Reed Huntington was a great lover of music. When Huntington arrived as the rector in 1883, Grace was well known for its operatic style of musical offerings.   As the 19th century drew to a close, the congregation grew increasingly dissatisfied with the style of music, and the churches further uptown were thriving due, in part, to excellent, more progressive music programs. In 1894, Huntington had persuaded the church to form a boy’s choir, which he felt would entice more parishioners.  In order to fulfill the mission of social justice and community outreach, the church also founded a school that would educate the boys. The choir school began with sixteen boys and served as a model for other institutions throughout New York.  It later evolved into Grace Church School, which today provides instruction for over 700 students in junior kindergarten through grade 12. In 1994, the Girls’ Choir was established at Grace Church. Today, 72 boys and girls sing in the Combined Choirs of Grace Church under the direction of Dr. Partick Allan. The Grace Church Choir of Men and Boys can boast of being the oldest boy’s choir in continuous service in New York City.

The performance on Friday, April 26th is open to the public, with a ticketed reception immediately to follow.