This is one in a series of posts marking the 50th anniversary of the designation of the Greenwich Village Historic District.  Check out our year-long activities and celebrations at gvshp.org/GVHD50.

Music is an integral part of the cultural legacy and impact of our neighborhoods! In March 2019 we explored the iconic music venues and punk meccas of the East Village through East Village Building Blocks. Today we’re venturing west into the Greenwich Village Historic District for another musical tour.

One of the city’s “most cherished” jazz clubs, the Village Vanguard “has been called the ‘Camelot of jazz rooms,’ the ‘Carnegie Hall of Cool’ and the ‘prototypical Village bohemian club.’” Having not budged from its location at 178 7th Avenue South since 1935, this venue has welcomed an unbelievable range of artists onto its stage. Owner Max Gordon originally opened the Village Vanguard on Charles Street a year earlier, and even had a little place called the Village Fair on Sullivan Street before that. Though initially billed as a spot for folk music and beat poetry, the club boomed as 1940s jazz musicians started to regularly perform there and as the public began to take a liking to the developing genre.

The Vanguard brought in the likes of Miles Davis, Charlie Mingus, Thelonious Monk, Sonny Rollins, and countless others who rose to stardom at this venue. Like a number of hallowed halls around the Village, we’re fortunate to still be able to step down into this place where so much music history occurred. Max Gordon passed away in 1989, and his wife Lorraine closed the Vanguard the next day. The day after that, though, she opened its doors again. Now almost 85 years running, the Village Vanguard continues as a must-visit for music history buffs. 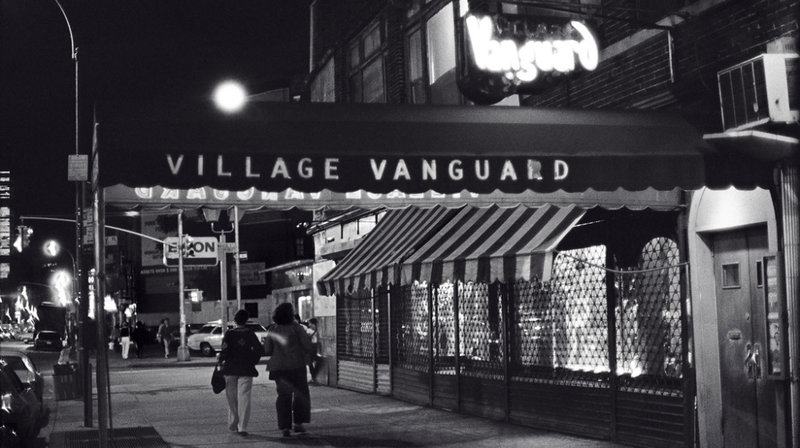 Next we visit one of the most groundbreaking venues within the Historic District – Café Society. Café Society, remembered as the first racially integrated nightclub in New York City, opened in 1938 at One Sheridan Square and attracted some of the most incredible jazz legends of the 1930s and 40s. Big names like Duke Ellington, Bessie Smith, Count Basie, Nat King Cole, John Coltrane, Miles Davis, Ella Fitzgerald, Lena Horne, Big Joe Turner, Nellie Lutcher, and Mary Lou Williams took the stage at this unconventional, free-spirited venue. Most famously, Billie Holiday first performed “Strange Fruit,” a song of outright protest against racism, lynching, and a government that refused to pass anti-lynching laws, at Café Society in 1939.

Club owner Barney Josephson, a former shoe salesman, modeled Café Society after the earlier political cabarets in Europe, where radical openness, uncensored discussion, and cutting-edge performances drew like-minded crowds.  While the legendary Café only ran for a little over a decade, its revolutionary work had an enormous impact and its legacy has lived on since it closed in 1949.

A 2016 Village Award winner, and another still up-and-running Village venue, Smalls Jazz Club has nurtured many emerging and established jazz musicians for 25 years and has become a magnet for jazz fans and artists from around the world. Located at 183 West 10th Street, co-owner Mitch Borden opened the place in 1994 as a BYOB place for jazz lovers. The club closed in 2002 and was an unsuccessful Brazilian bar under a new owner. It switched back to jazz in 2004 with Mitch as the manager. Mitch and co-manager Spike Wilner eventually became the owners and managers in 2011.

Located at 15 Barrow Street, Café Bohemia opened in 1955 by owner Jimmy Garofolo. In 1955, saxophonist Charlie Parker was living across the street from the club (just a restaurant, bar, and little stage at the time) and offered to play in exchange for free drinks, which unofficially began the room’s short-lived life as a jazz club. Though Parker died before he could truly begin his engagement there, his connection solidified the place as another must-go for jazz. Superstar performers like Charles Mingus, Miles Davis, and Art Blakey pleased the crowds, and jazz greats joined the audience as listeners as well.

Moving slightly away from jazz venues, Trude Heller’s at 418 6th Avenue is documented as a “swinging Greenwich Village discotheque” featuring “raucous, crowd-pleasing music and frenzied go-go dancing.” Opened in the early 1960s by entrepreneur Trude Heller, the venue was, “according to Trude Heller, the best place in town. ‘It has the fire,’ she’ll tell you in her hoarse cigarette voice. ‘It has the fire.’” Photographs from the venue certainly paint this sort of picture, with mini-skirted dancers and brightly colored circles surrounding the stage. It even appears that Joshua White of the Fillmore East designed lighting for Trude Heller’s as well. A young Cyndi Lauper sang on Trude’s stage, as did the Allman Brothers, the Beastie Boys, Ben E. King, Otis Redding, and others.

On August 26th, 1970, just weeks before his unfortunate death, Jimi Hendrix opened Electric Lady Studios at 52 West 8th Street. A recording studio that continues to draw in some of the biggest rockstars of the past almost 50 years, the place surely serves as a reminder of Hendrix’s astonishing contributions to music history in his brief but transformative career. From greats like The Clash, Madonna, Stevie Wonder, and the Rolling Stones, to contemporary shakers like Kanye West, Adele, and Lady Gaga, Electric Lady Studios has welcomed true music royalty. Also interestingly, the studio’s building housed the popular music venue the “Generation Club,” where Hendrix, Janis Joplin, B.B. King, Chuck Berry, and Sly and the Family Stone, among many other musicians of the day, performed.

Prior to that, the basement of the building contained “The Village Barn,” a country-themed nightclub and dining hall, from 1930 to 1967.  The Village Barn even spawned an eponymous country music program on NBC, the first country music program on American network television. The show ran from 1948 to 1950, and featured weekly performances from the likes of “Pappy Howard and His Tumbleweed Gang,” “Harry Ranch and His Kernels of Korn,” and even Oklahoma Governor Roy J. Turner, who performed his single “My Memory Trail.”

Though not a venue in the traditional sense, it seems essential to include the Greenwich Village Historic District’s southeast-most corner in our musical adventure. As a gathering place for many counter-culture movements of the past two centuries, we still so often see creatives seated around the fountain and the grass with their instruments. Like the images from Carole Teller’s collections in our Historic Image Archive, the park is “perhaps best known for its folk music that flourished there after the end of World War II.”

The likes of Bob Dylan, Joan Baez, David Bennett Cohen, and plenty of others played their music in Washington Square Park.  In 1961 the Washington Square Association, along with then-Parks Commissioner Newbold Morris, asserted that the park should remain tranquil and quiet.  Police obeyed orders to remove “the roving troubadours and their followers” from the park. Izzy Young, owner of the Folklore Center on MacDougal Street, arranged a protest to push back against this control. Of course, the ban eventually lifted and the park has since remained a place of open-air creative expression.

You can check out many other tours of the Greenwich Village Historic District on our interactive map at www.gvshp.org/gvhd50tour.