The East Village has been fertile ground for theatrical innovation since the beginning of the 20th century. Off-Off Broadway productions began in the East Village as an anti-commercial and experimental or avant-garde movement of drama and theater. To celebrate the iconoclasts and innovative creators in our neighborhoods, we’ve created a tour of current and former theaters. To explore some of these sites, we’re sharing this East Village Theater Tour on our East Village Building Blocks website — see it here, and read on for a selection of theaters throughout the East Village, both current and former. 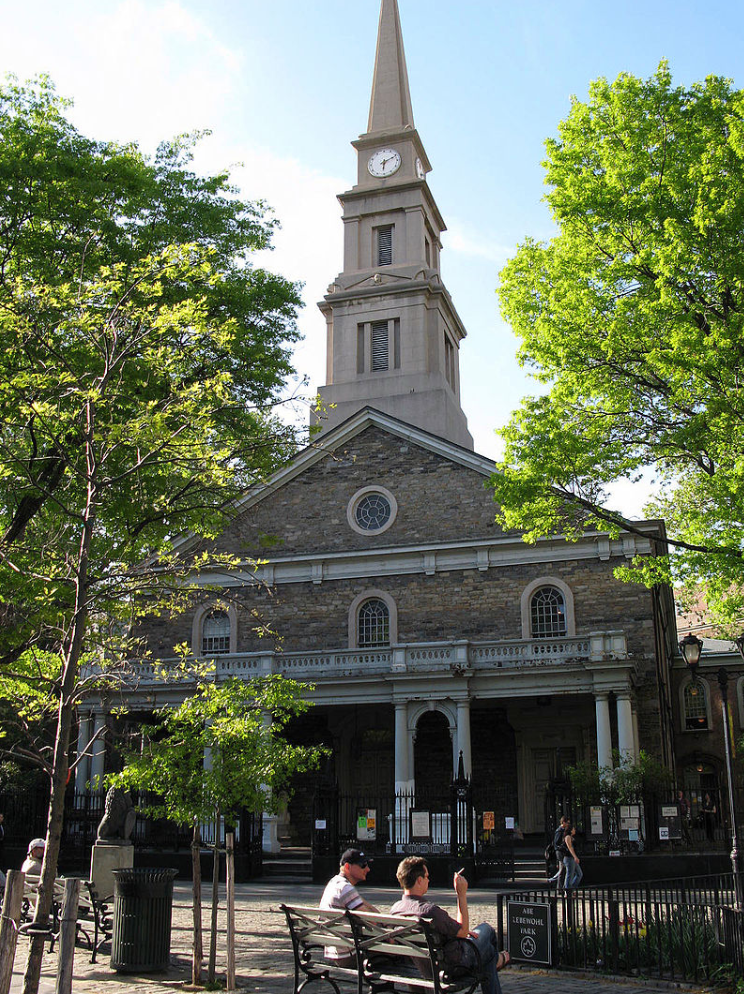 My favorite story of living in New York revolves around one of the most seminal Off-Broadway theaters: Theatre Genesis.  Upon the occasion of the death of playwright Sam Shepard, I sat down to write about his extraordinary career.  As I began to comment on the naissance of Sam’s writing and his early years in New York, I was reminded that his first play was produced at a small venue in the East Village called Theatre Genesis.  As I looked out of my window from my desk here at 232 East 11th Street, it suddenly dawned on me that I had been looking at what was Theatre Genesis for over a year and hadn’t recognized it!

Since the turn of the 20th century, St. Mark’s Church in the Bowery has been deeply committed to the arts.  The St. Mark’s Arts Committee was formed by Rector William Guthrie in the early 20th century.  Members of the committee included Kahlil Gibran, Vachel Lindsay, and Edna St. Vincent Millay.  Their guidance made St. Mark’s a bastion of cultural significance.  With the support of Rev. Guthrie, Martha Graham and Ruth St. Denis danced in the Sanctuary.   Under the next two rectors, Rev. Richard E. McEvoy and Rev. Michael Allen, the church’s commitment to the arts flourished. W.H Auden was a parishioner; free jazz concerts were offered in the west yard. In 1963 the Umbra collective held a festival that featured African-American painters, poets, musicians, and others.

Theatre Genesis was founded at St. Mark’s in the Bowery in 1964 by congregant Ralph Cook. The theater opened with a double bill of one-act plays – Cowboy Mouth and The Rock Garden — both by a then-unknown, 20-year-old Sam Shepard. Alongside Caffe Cino, Judson Poets’ Theater, La MaMa and more, Theatre Genesis  helped create the foundation of what we know today as the Off-Off Broadway scene. It  went on to produce the work of many new American playwrights, including Lanford Wilson, Murray Mednick, Leonard Melfi, Walter Hadler, and Albert Innaurado.   After Cook left in 1969, playwrights ran Theatre Genesis until 1978. Later the theater at St. Mark’s began hosting Richard Foreman’s Ontological-Hysterical Theatre.  New York Theater Ballet now creates in the space. 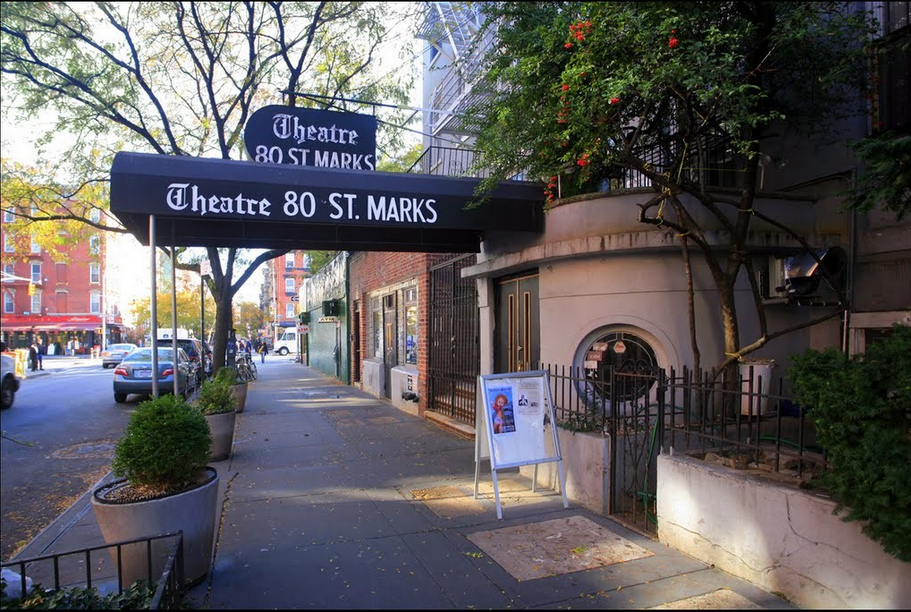 At 78-80 St. Mark’s Place is a pair of 1845 row houses. It is said that Leon Trotsky lived briefly in the house at No. 80 in 1917, when he was a contributor to the magazine Novy Mir, which was published across the street at No. 77 (the house in which W.H. Auden would later live). The houses were converted into a music club called Jazz Gallery which opened in 1959 and was owned by the brothers Joe and Iggy Termini, who also owned the Five Spot at 5 Cooper Square, so many of the same artists who appeared at the Five Spot also appeared at Jazz Gallery. The Thelonious Monk Quartet and the John Coltrane Quartet were just an example of the phenomenal artists who played there.  It was also the site of the final performance of the hipster monologist and performance artist known as Lord Buckley in 1960. Jazz Gallery closed in 1964 and in 1966 the houses were converted into what is now Theatre 80.

In 1967, Theatre 80 premiered Clark Gesner’s musical You’re a Good Man, Charlie Brown, starring Gary Burghoff as Charlie Brown and Bob Balaban as Linus. The Theatre 80 production of You’re a Good Man, Charlie Brown ran for 1,597 performances, closing in 1971. In that year Theatre 80 was remade into a revival movie house.  In 1994, the theater was leased to the renowned Pearl Theatre Company, known for its productions of the classical repertory of works by Shakespeare, Sophocles, Aeschylus, Molière, Ibsen, Shaw, and others. The Pearl was located at 78-80 St. Mark’s Place from 1994 to 2009. 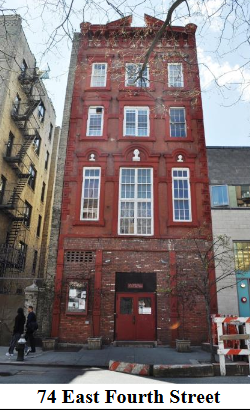 74 East Fourth Street, designated a New York City landmark in 2009, was built in 1873 for the Aschenbrödel Verein (“Cinderella Society”), a musicians’ club formed in Kleindeutschland in 1860.  In 1967, it became Ellen Stewart’s La MaMa Experimental Theatre Club.

Ellen Stewart came to New York in 1950 and in 1961 opened Café La MaMa at 321 East Ninth Street (between First and Second Avenues). 1962 the theatre company staged the American premiere of Harold Pinter’s first play, The Room (1957). The theatre company was forced to move several times. In 1964, it changed its name to La MaMa Experimental Theatre Club, or La MaMa E.T.C. The kind of small-scale, Off-Off-Broadway, café-based theatre that La MaMa represented was almost destroyed in the mid-1960s by legal action by Actors’ Equity, which finally relented in recognition of the necessity to actors’ training of the small workshop theatres that could exist only if exempted from strict union rules.

A National Endowment for the Arts grant in 1974 allowed for expansion to an annex in the former Turn Hall (Nos. 66-68), where La Mama built a 295-seat theatre. La Mama has staged more than three thousand productions in New York and won more than sixty Obie Awards. Ellen Stewart received a MacArthur Fellowship Award in 1985. La MaMa has been home to such playwrights as Sam Shepard, Lanford Wilson, Harvey Fierstein, and Terrence McNally; directors including Tom O’Horgan, Joseph Chaikin, Robert Wilson, and Richard Foreman; and such actors as Al Pacino, Robert De Niro, Richard Dreyfuss, Bill Irwin, and Danny DeVito. La MaMa, which is still going strong and anchors the Fourth Arts Block, best epitomizes the Off-Off-Broadway theatres that from the 1960s to today have been a a defining part of the theatrical culture of New York City. 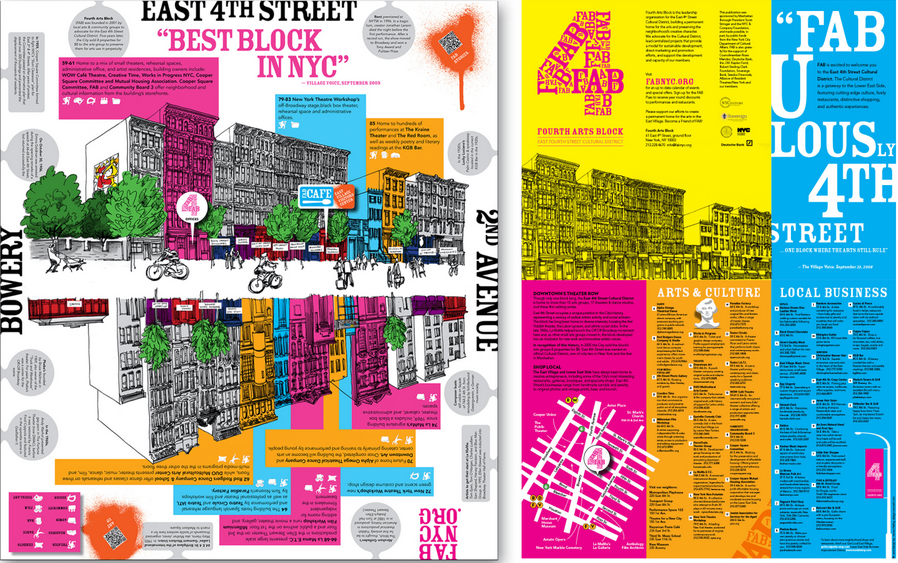 “Downtown’s Theater Row,” the East Fourth Street Cultural District, contains 10 theater companies, two dance companies, four visual arts organizations, and two non-profit community development organizations.  The East Fourth Street Cultural District is one block long between Bowery and Second Avenue and its story is one of community activism, preservation, and anti-displacement efforts for long-time cultural organizations. The buildings that make up the district were slated for demolition in the 1950s by City Planning under Robert Moses. At the time, these buildings housed manufacturing and small businesses and were purchased by the city and federal government through eminent domain. The residents on the block formed the Cooper Square Committee and thwarted the razing of the buildings, both residential and commercial. Following La MaMa’s occupation of 74 East Fourth Street in the 1960’s, other small art groups started to occupy the buildings on this stretch of East Fourth Street through cheap leases and made improvements to the structures. Under the Giuliani administration, New York City decided to sell the properties. With guidance from the Cooper Square Committee, the non-profit East Fourth Street arts groups began organizing collectively in 2001, naming themselves Fourth Arts Block or FAB. With the advocacy from various community leaders, the City finally agreed to transfer the properties to the arts groups for one dollar each with the restriction that the buildings be used in perpetuity for non-profit cultural programs. 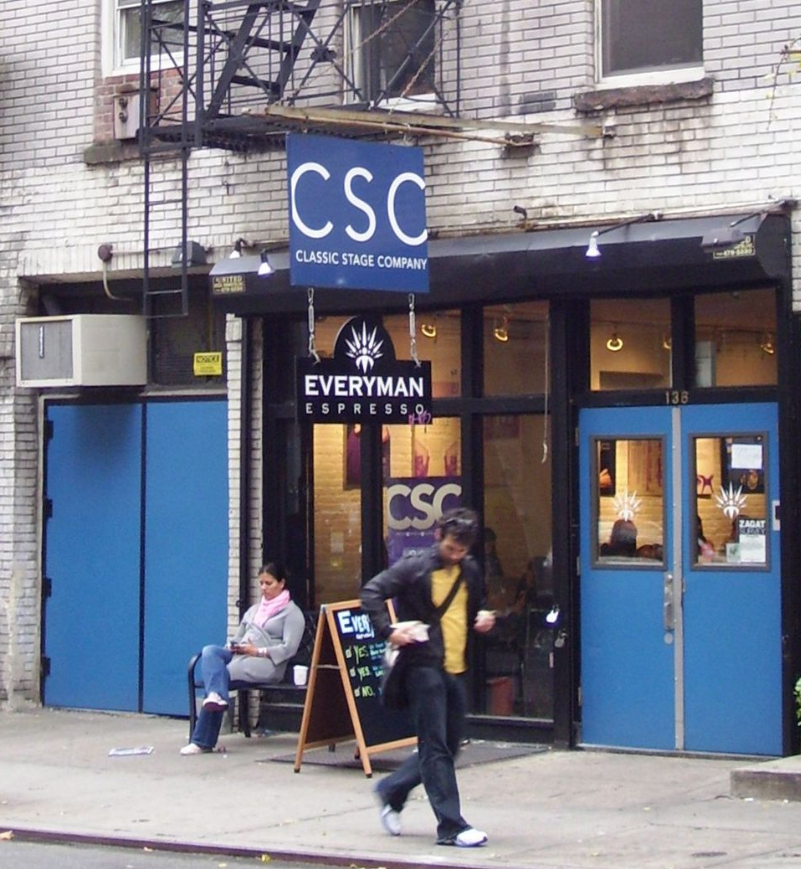 Classic Stage Company (CSC) is committed to re-imagining classic stories for contemporary audiences. It is a home for both established and emerging artists to grapple with great works of the world’s repertory that speak directly to the issues of today.

Currently, alongside its regular season, CSC is in partnership with Oregon Shakespeare Festival to present Play On Shakespeare, offering 39 readings from the Play on! Shakespeare translation project. OSF commissioned 36 playwrights—more than half of whom are women and more than half of whom are playwrights of color, each paired with a dramaturg—to translate Shakespeare’s works into contemporary modern English to celebrate the enduring impact of the Bard’s plays. These commissions challenge the playwrights to bring the same level of dramatic pressure and rigor of language to their work as is present in the originals, deepening our understanding and engagement with Shakespeare.

These are just a few of the theaters you will find on the complete tour.  You’ll also find a fantastic opera house, a Yiddish theater whose interior and exterior are landmarked, a theater that was rented by Andy Warhol to show his series of films he called “Boys to Adore Galore!” and so many others.  Please visit our East Village Building Blocks site and click here for the tour of the theaters in the East Village.

We hope you enjoy our tour, but more than that, we hope you will attend the theater in one of these venues soon and often! There are always fantastic things to see on the boards!