Milton Glaser’s “I ♥ NY” logo is one of the most iconic and most replicated logos of the late 20th century, filling the storefronts of our city’s souvenir markets and found on road signs, magazine advertisements, key chains, t-shirts, and much more.  But it’s just one of many achievements and successes in the field of graphic design and by someone oft-touted as the embodiment of his field in the second half of the 20th century. Glaser made the East Village his home early in his career, and at Astor Place we are lucky enough to boast one of his designs.

Glaser was born on June 26, 1929, to a first generation Hungarian-Jewish immigrant family, and spent his childhood in the South Bronx. Growing up in an eclectic neighborhood near the notable United Workers Cooperative Colony (aka The Coops), he was heavily influenced by the emerging leftist activism. He attended the High School of Music and Art (now the Fiorello H. LaGuardia High School of Music & Performing Arts) and graduated from Cooper Union in 1951.  Via a Fulbright Scholarship, he also had the opportunity to attend the Academy of Fine Arts in Bologna.

In 1954 he co-founded the revolutionary Push Pin Studios, alongside fellow Cooper Union alums Seymour Chwast, Reynold Ruffins, and Edward Sorel.  For twenty years he, along with Chwast, directed the organization, which would prove a significant influence in the world of graphic design.

While at Cooper Union, Glaser also met the photographer Shirley Girton—whom he collaborated with and married in 1957. The pair eventually settled in an apartment on St. Mark’s Place, joining their artistic peers in the East Village. Glaser described the area at the time in an interview with the New York Times:

That was the legendary St. Marks Place, with Auden walking around in slippers, and Rauschenberg and Jasper Johns. There was no one who was not on the Lower East Side in those days. I had a friend who had an apartment for $7 a month. Of course, he had no heat. But everybody was there. It was so active and so lively and so transgressive. Everybody felt they were a part of something special, and they were.

Glaser’s earlier solo breakthroughs include music posters for the Manhattan-based company Tomato Records (formerly known as Poppy Records), and his first was for Bob Dylan’s Greatest Hits LP in 1966. From there, he went on to render many of his artistic designs for similar uses like the logos for music and business prints in New York and across the country.  In 1968 he and Cley Felker founded New York Magazine, and, in 1974 he established Milton Glaser, Inc.

By the mid-1970s New York City had a serious public image problem due to its elevated crime rate and the fact that it was on the verge of bankruptcy. In an effort to improve the city’s image and boost tourism, the New York State Dept. of Economic Development asked the advertising agency Wells Rich Greene and Glaser to come up with a cheery and inviting design with one slogan: “I Love New York.” According to Glaser, he came up with the logo in the cab on the way to the meeting and scribbled it on a piece of paper (currently this doodle is housed at MOMA). The source of inspiration for the stacked letter was supposedly the “LOVE” design by Robert Indiana, another artist who got his start in the East Village. 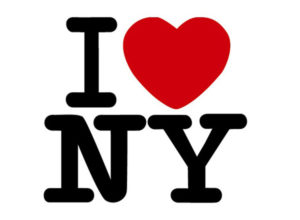 While “I ♥ NY” can be found to this day all around New York, we are fortunate enough in our neighborhood to enjoy another Glaser design at the Astor Place subway station. There, he designed a series of colorful murals—modelled after the original ceramic patterns of 1904 station mosaics—and made installations at the station’s underground level. To learn more about the history and architecture of the Astor Place station, click here.

In addition to his commercial success, Glaser’s work has been exhibited worldwide. Glaser has been an instructor and Board Member for the School of the Visual Arts since 1961 and is currently on the Board of Directors at the Cooper Union. He was awarded by President Obama the National Medal of Arts in 2009.