“A long time ago in the 1960s, a young white girl from Ohio committed herself to being a revolutionary,” begins a short feature documentary about Patti Astor and her FUN Gallery (see within). FUN Gallery opened originally in the tiny basement storefront at 229 East 11th Street in 1981, later moving to 254 East 10th Street until it closed in 1985. At FUN, the art was so big, the small spaces hardly mattered. Patti Astor’s time in New York, as an anti-war revolutionary and Black Panther sympathizer, indie film actor, and general scene-kid, gave her a perfect resume to open the wild, groundbreaking FUN Gallery. The first art gallery in the EAst Village, FUN was a home where art, graffiti, hip hop, music, dance, and film stars came together to celebrate with the likes of Fab 5 Freddy, Madonna, Keith Haring, Jean-Michel Basquiat, and many more.

Patti Astor moved to New York from Ohio in the late ’60s. She’d been accepted to Barnard, but she dropped out to become active in the anti-war movement. Astor calls herself a young revolutionary and punk rocker, and though arguably the quintessential East Villager of her time, she’s not of any clear relation to the Astors who made the East Village what it is. Then, being a party-goer, she found herself in a very particular East Village Scene, moved from her previous work in dance onto the screen, and ultimately was crowned Queen of Downtown Screen. Her best-known role was in Charlie Ahearn’s Wild Style, in which Astor starred as a reporter who brings uptown hip-hop culture to the downtown art world. How art mimics life!

Astor moved to the East Village, which she talks about as a place that was seen as dangerous by outsiders, but home to those who lived here. She recounts the special ethnic enclaves in the East Village, the cheap rents, the wild parties, and more.

In an interview with BOMB Magazine, Astor recounted:

I moved to the East Village very early on, the end of ’75. At that time Eric Mitchell and I were mostly going to Lee Strasburg’s acting school … sort of (laughter). People just said, “Okay, goodbye, we’ll never see you again because we’re not coming over there and you’re going to get killed.” And we were like, “Okay, fine.”

You have to realize, in those East Village tenement apartments nothing ever got fixed. So the plumbing would leak in the plaster ceilings, which would keep getting soaked and soaked until the whole thing would crash. Of course, we really never paid any rent either so, hey, it’s a trade off. (laughter) What do you want for $65 a month that you don’t even have to pay?

Today, Astor lives in southern California, where she moved when she felt that the East Village had changed too much for her liking. She published the book FUN Gallery… The True Story (which is sold out!), which chronicled her life and the creation, running, art, and general scene of the FUN Gallery. 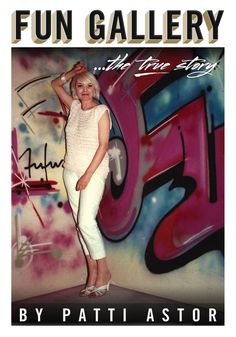 FUN shot to fame as the first art gallery in the East Village, which was also the first to give graffiti artists one-person shows. Like with many do-it-yourself projects, there were many hands behind it. Although its tenure was brief, the changes The FUN Gallery brought to the art world endure in many ways, including leading the way for dozens of other galleries that later appeared throughout the neighborhood.

Astor recounts, in many interviews, the party she threw in her tenement apartment on 3rd Street between 2nd Avenue and the Bowery. Graffiti artist FUTURA was creating a mural on her apartment wall, and she had decided to make an event of it. Somehow, many movers and shakers of the art world showed up for this installation/bbq, and it inspired Astor’s friend Bill Stelling to offer up a small space for a gallery. Astor remembered, “Other than Bill’s belief in the artists and me we never had a backer… Our rent was $125, so we were so willing to take that chance and actually it was cool when you got over there.”

Encountering the uptown hip-hop culture, as she did on film, was another key element. Astor remembered:

I always say that the beginning of the FUN was when I met FAB 5 FREDDY in 1981. I was starring in my punk rock spectacular Underground U.S.A. in it’s sixth month as the midnite flick at St. Marks Cinema. FRED had gotten on the tip of the downtown scene with Blondie and “Rapture”, dragged his homies (including Futura) to see the movie and after that we met. The Queen of Downtown had met the King of Uptown, FAB said I was “Down By Law” and the art world would never be the same!

In the beginning, the gallery took on a new name for each show. Artist Kenny Scharf decided that for his show the space would be called “FUN GALLERY,” and after that, the name stuck. The FUN Gallery was an inspired foil to the “ivory” galleries of SoHo, as Astor and Stelling, who’d met at the Mudd Club, intended for the space to be for art that could be enjoyed without an art degree. The gallery attracted artists, b-boys, rock, film and rap stars as well as more established art collectors and historians. Artists included Jean Michel Basquiat, Lee Quinones, SHARP, Keith Haring, Fab 5 Freddy and Revolt.

Patti said: “I want everyone who walks through that door to feel, yes I can make a difference here.”

The resources about Patti Astor and the FUN Gallery are seemingly endless. I loved watching this short, 7-minute documentary, with images and stories from Patti herself. Watch it here:

The FUN Gallery still has a website, which holds many great resources, including the t-shirt that Keith Haring created for his show at the FUN Gallery. 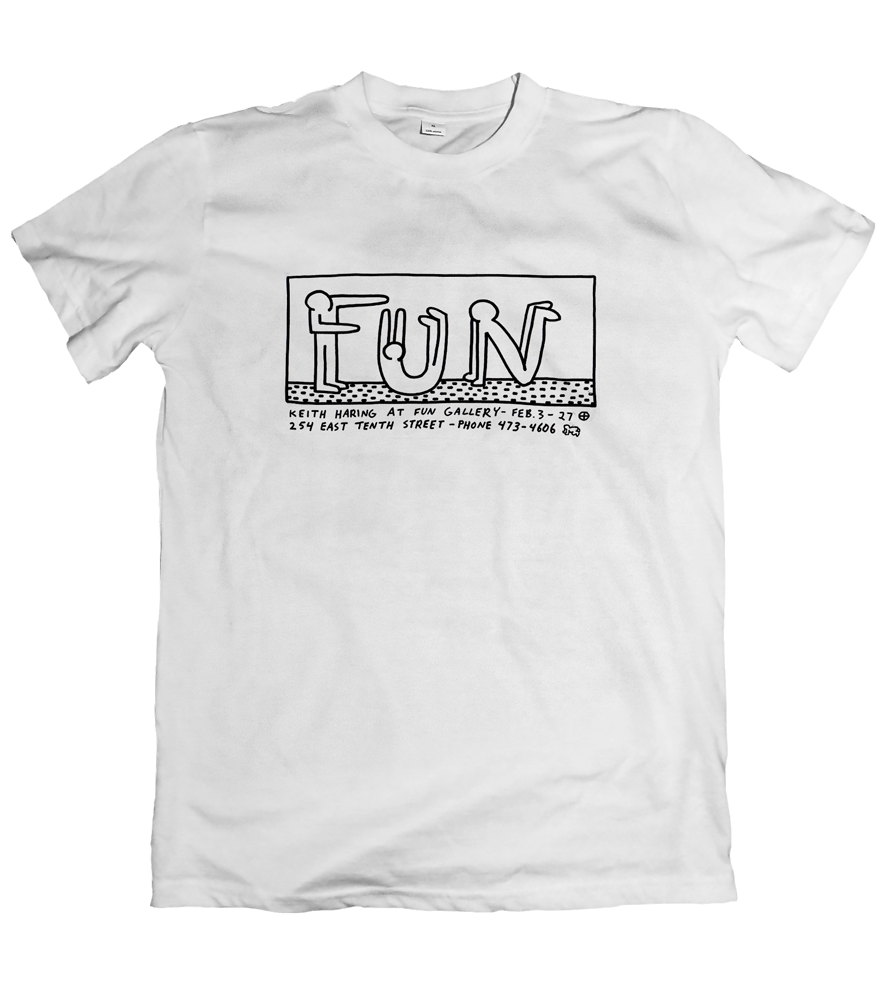 You can also watch this interview with Patti Astor, Fab 5 Freddy, and Jean Michel Basquiat (Astor has opinions about the footage):

In 2017, when Village Preservation dedicated an historic plaque on Jean Michel Basquiat’s studio, Patti Astor joined Village Preservation’s panel conversation about Basquiat. She spoke largely about her relationship with Basquiat as his career emerged, took shape, and then took off. There was no roadmap for someone like Basquiat, and Astor reflected on how jarring it could be for yong artists to suddenly gain fame with no help on how to handle it. Patti purposefully created the FUN Gallery as a place that would celebrate and advocate for artists like Basquiat, as well as providing a space for artists to encounter their peers and share in each other’s successes.

Excerpts of Astor’s book can also be enjoyed here.