We’ve recently had ten new buildings in our area designated landmarks, which also means ten new designation reports rich in history available to pour over.  They came in two waves — on June 11, seven buildings were landmarked on Broadway between 12th and 13th Streets, and on June 18th, three buildings in our neighborhood were landmarked for their significance to LGBT (lesbian, gay, bisexual, and transgender) history. All were part of Village Preservation’s ongoing efforts to secure landmark designation for the area south of Union Square and for LGBT historic sites, but today we’re honing in on one which we first proposed for landmark designation five years ago — The Lesbian, Gay, Bisexual & Transgender Community Center at 208 West 13th Street — you can read the full designation report on our website here (designation reports for every landmarked building and historic district in our neighborhoods can be found on our website here).

This former school building in Greenwich Village has been a focal point for the lesbian, gay, bisexual and transgender (LGBT) community in New York City for 35 years. The Lesbian, Gay Bisexual & Transgender Community Center, known as The Center, acquired the three-story Italianate-style former school from the City of New York in 1984. In the many decades since then, it has played an instrumental role in supporting the rights, health, and wellness of the LGBTQ community, welcoming hundreds of community groups and hosting meetings, celebrations, workshops, cultural events, and mental health and social services. In fact, Village Preservation often holds its annual retreat in one of their many spacious conference rooms.

Originally, six organizations occupied The Center in 1984, including Partnership for the Homeless, S.A.G.E. (Senior Action in a Gay Environment), Metropolitan Community Church, and The Community Health Project, the nation’s first community-based HIV clinic. One partnership included contributing 1,200 panels to the AIDS memorial quilt with the organization Heritage of Pride. The Coalition for Lesbian and Gay Rights used the building as a meeting place in the 1980s, and played a critical role in winning approval of the 1986 New York City law banning discrimination on the basis of sexual orientation. Over the course of its history, other notable groups have gathered at the LGBT Community Center, including Gay and Lesbian Youth, the Lesbian Switchboard, Dignity/New York, Asian Lesbians of the East Coast, Harvey Milk High School, Salsa Soul Sisters, Survivors of Transsexuality Anonymous, and the Gender Identity Project. 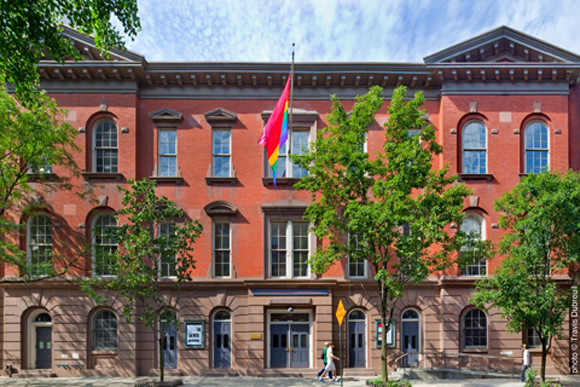 The building was originally erected as Public School No.16 (later Grammar School No. 17) and was substantially enlarged c. 1879 and c.1897. It is located on the south side of West 13th Street, mid-block between Seventh and Eighth Avenues, and is part of the Greenwich Village Historic District, designated in April 1969, the 50th Anniversary of which we celebrated this year. Before The Center purchased the building it had most recently been used by the Food and Maritime Trade Vocational High School.

Since purchasing the building in 1984, The Center has undertaken facade restorations and interior renovations, including a major rehabilitation in 2001 by Francoise Bollack Architects, and in 2015 by Brian Ripel and Nicola Mongelli of Combined Architecture and Design. Today it is home to an archival collection, arts and cultural programming, young adult programs, and career services dedicated to the LGBT community. 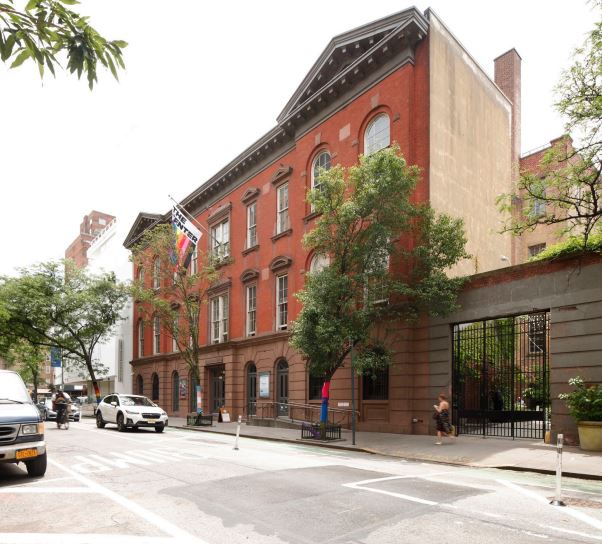 According to the Designation Report, “In December of 1984, a group called the Lesbian and Gay Community Services Center purchased 208 West 13th Street from the City of New York for approximately $1.5 million dollars. Prior to the purchase of the building the group had organized in hope of finding a physical home to provide services to the LGBT community, established a Board of Directors, and for over a year worked to raise the funding needed to purchase 208 West 13th Street, mainly through individual donations. Originally referred to as the Lesbian and Gay Community Services Center, it is known today as the Lesbian, Gay, Bisexual & Transgender Community Center, and commonly called The Center. The Center aimed to address the critical needs of lesbian and gay organizations trying to cope with the political, medical, and social service issues facing the LGBT community, and allowed a variety of smaller LGBT organizations to rent space in its new facility. Immediately upon its opening, The Center began to fill with individuals and organizations looking for physical space to organize, meet, share ideas, and for some, to feel safe. Originally six tenants leased space from The Center, including Partnership for The Homeless, Community Health Project, Friends of the Earth, S.A.G.E., Metropolitan Community Church and the Media Network. Many of The Center’s early tenants had been originally housed in the GAA Firehouse and the Women’s Liberations Center. The Center served as a central location as well as an incubator for smaller grassroots organizations, many of which are still active today.”

The other buildings in our neighborhood we fought to have landmarked which were landmarked in June of this year, all of which now have LPC designation reports with rich historical details about each of the buildings are  817 Broadway, 837-847 Broadway, 830 Broadway, 832-834 Broadway, 836 Broadway, 840 Broadway, Caffe Cino, 31 Cornelia Street, and the Gay Activist Alliance Firehouse, 99 Wooster Street.  If you want to help us as we fight to extend landmark protections to more of the area south of Union Square click here.  If you want to access more designation reports for buildings and areas of our neighborhood, containing fascinating historical information, click here.