New York may be known for its lively comedy scene, but Greenwich Village takes the cake when it comes to producing the most renowned comedic legends. Comedy spots all over the Village helped shape the careers of comedians like Joan Rivers, Woody Allen, Dave Chapelle, and many more.

To this day many successful comedians from around the world continue to test out their new material right here in the Village. Most of the clubs on the list are still around today, so you can still catch some laughs! 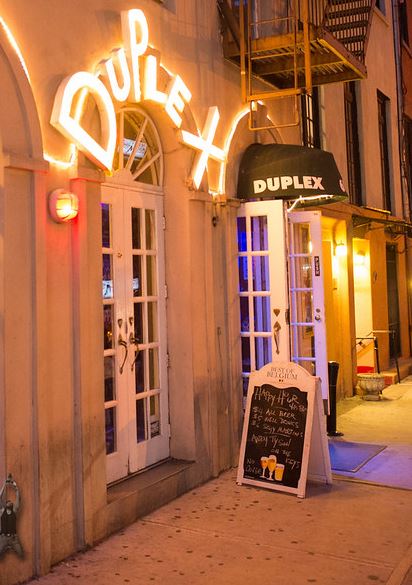 The Duplex is the superstar of Seventh Avenue South and Christopher Street, with its name shining bright for all to see. A great variety of shows takes place here, from campy drag acts to piano balladeers to intimate performances by some of Broadway’s brightest stars.  Stand-up comedy has long found a home at the Duplex one flight up, in the upstairs cabaret space, which has hosted many open-mic events.

Established in 1950, the legendary Duplex kick-started the careers of legends like Woody Allen, Joan Rivers, and Barbara Streisand. Rivers and Allen actually first met here as they were finding their comedic voices as rising legends in the smoke-filled nightspots of Greenwich Village. Even after Rivers reached stardom, she would still come back to the Duplex’s cabernet room to reminisce and share a laugh with the people who gave her that first shot. Photos of the superstars, like her, that the club has helped launch line the walls, watching and inspiring new artists to utilize the stage to make their mark. 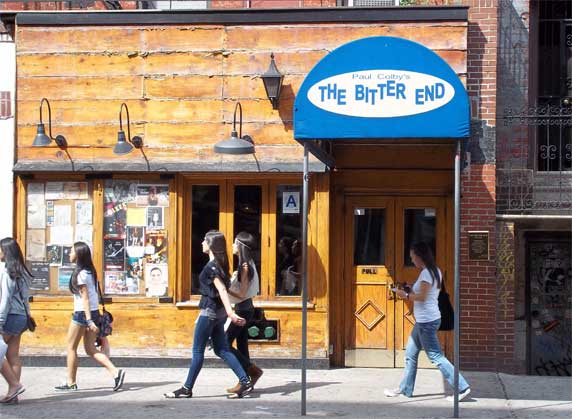 Bleecker Street has undergone quite a bit of change over the last half-century. But thankfully a few standouts from its golden era remain, including the well-known music & comedy venue The Bitter End. When the Bitter End first opened its doors in 1961, it was mostly known for being a showcase for rookie comedians to test out the comedic waters. Some of those unknowns reached greater success later, like Jay Leno, Albert Brooks, and Dick Cavett. The Bitter End is also a music venue and is famous for hosting talent like Lady Gaga, Taylor Swift, Stevie Wonder, and so many more. The club keeps close to its roots through its dedication to shaping the careers of emerging comedians and artists. The classic look of the red exposed brick backdrop and cozy vibe make this celebrated venue as famous as its long list of headliners.

This Bitter End was honored this year at Village Preservation’s 2019 Village Awards. The establishment is also located within the South Village Historic District. Learn more about our work to protect the South Village here. 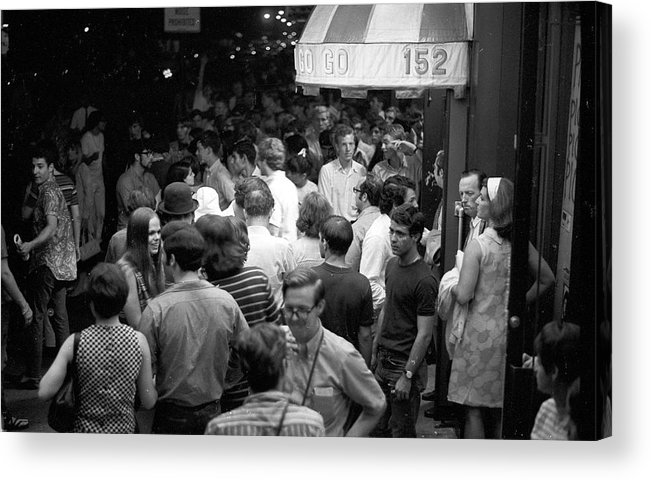 Unfortunately, Café Au Go Go is no longer with us.  The building it was located in was demolished in 1970, but when it was functioning, Café Au Go Go was the place to be. The venue’s legacy lives on in the stars that were born on its stage. From 1964 to 1969 the Cafe Au Go Go was a beacon in the night for many a disenfranchised performer. The Grateful Dead, Jimi Hendrix, Lenny Bruce, & George Carlin are just some of the once-obscure and relatively unknown musicians and comics who performed there. Comedian Lenny Bruce has further ties to the nightclub, as he was close acquaintances with the owners Howard and Elly Solomon. The Solomons reached out to Bruce to perform a six-week run to support the club when the city brought legal charges against the venue, resulting in the loss of the Café’s liquor license. Bruce and the owners were then arrested and charged with obscenity due to the comedian’s risqué act. This arrest not only solidified Café Au Go Go’s place in the pantheon of comedy performance venues, but also lead to a court battle that won comedians and other performers greater freedom in terms of what they could say in their performances. 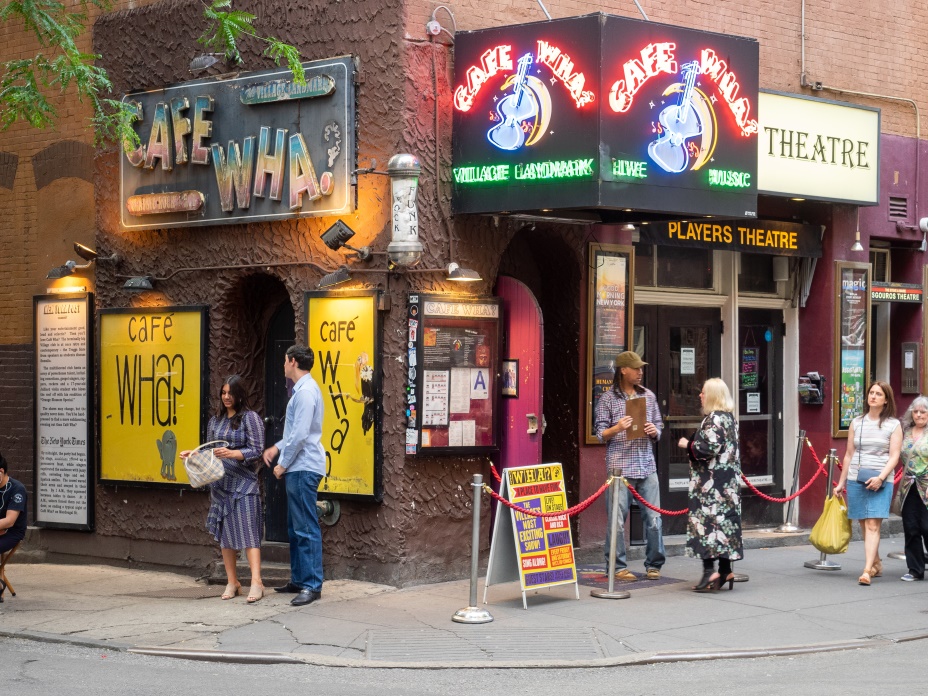 Manny Roth, the uncle of Van Halen lead singer David Lee Roth, was the original owner of Café Wha? In 1959, Roth heard about a dilapidated garage that used to be a horse stable on MacDougal Street that was for sale. The steep entrance and the dark, unwelcoming basement had been overlooked by who considered it unusable. But not Roth; he immediately recognized the potential, and Café Wha? soon rose to be a hotspot for musicians and comedians alike to showcase their talents. The nightclub served as an incubator for talents like Richard Pryor, Lenny Bruce, and even Bob Dylan. Roth closed the club in the late 1960s, and the space took a hiatus as a Middle Eastern restaurant in the 1970s & 80s. Wonderfully, though, the club has reopened its doors under new ownership and continues to host some of the best talents New York has to offer.

Café Wha? Is also located within the South Village Historic District. Learn more about our work to protect the South Village here. You can also check out our image archive of Fred W. McDarrah’s collection for original photography of Café Wha? and Bob Dylan (and you can order prints online). 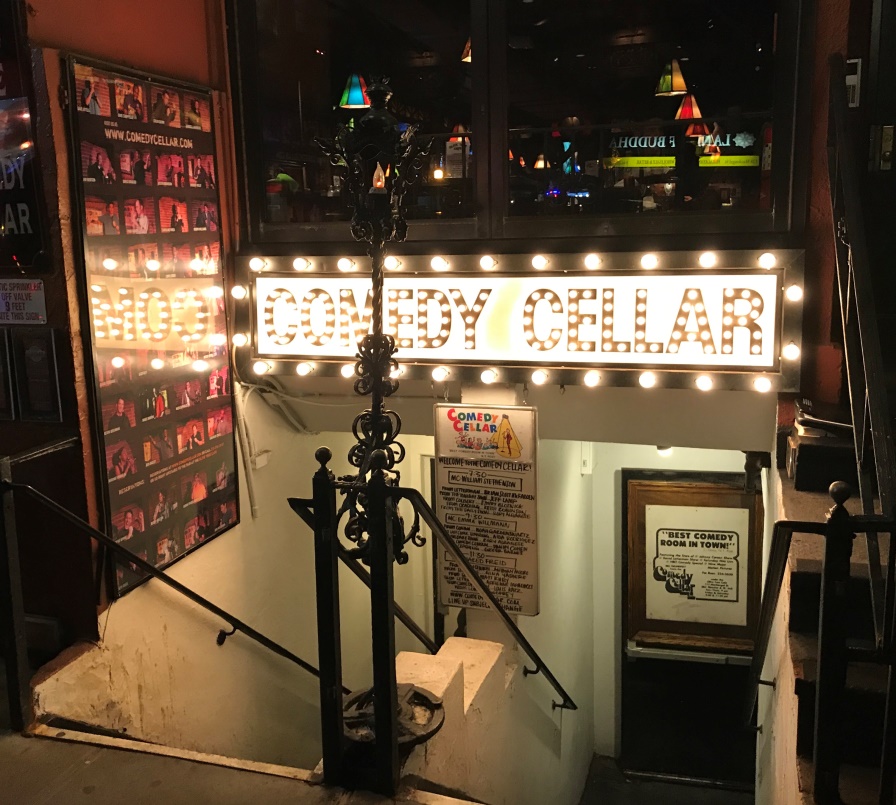 Since 1982, The Comedy Cellar has been the testing ground for some of the world’s leading comics. Several iconic comics got their start here in the 80s such as Louis C.K., Dave Attell, Todd Barry, Darrell Hammond, Dave Chapelle, & Colin Quinn. Many credit Estee Adoram for The Comedy Cellar’s success. She has been booking talent for the Cellar since 1984. As the Comedy Cellar’s gatekeeper, her reputation in the field of comedy is unmatched. Adoram’s motherly aura and friendly nature keep the comedians she cultivates coming back years after they have made it in the industry.

Jon Stewart returned to perform his first stand-up gig after he left The Daily Show. He perfectly described the attraction of the club: “You felt like you were part of something, a strange family of miscreants that lived in a basement on a urine-soaked street in Greenwich Village.” It takes a special kind of person to wax poetic about the smelly streets like that! The New York Posts has regularly rated the Comedy Cellar as the best comedy club in New York City.

The family-owned business was honored as one of Village Preservation’s 2018 Village Awardees. The establishment is also located within the South Village Historic District. Learn more about our work to protect the South Village here. 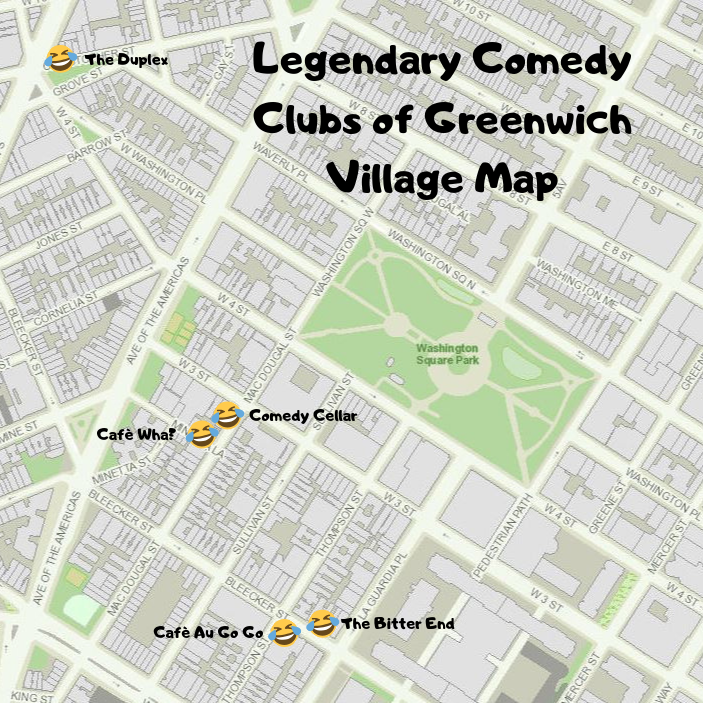 While the legendary Café Au Go Go has lost the battle against New York real estate, the rest of the comedy establishments on the list are still alive and well, thus keeping the Village’s title as class clown of New York. Support these local establishments so they can be around to create the future of comedy for generations to come. Visit their websites linked below to check out their nightly specials and events: