Nineteenth-century Jewish immigrant life in New York is well-documented, when massive waves of Jews, first from Germany and then from Eastern Europe, began to flood into the city.  This made New York the largest Jewish city by population in the world, which it remains to this day.  Like all immigrant stories, the Jewish community had to work hard to balance the pulls toward assimilation with their work to keep their culture alive.

An important but rarely told facet of that story is the history of Hebrew Free Schools. A movement which began in Philadelphia in 1848, it did not spread to New York until 1864, when Christian missionaries began a concerted effort to seek to convert Jewish immigrant children in New York to Christianity under the guise of offering free Hebrew education. The Jews of New York pushed back, and that movement was lead by congregations located in Greenwich Village and today’s East Village.

Jewish Life and Education in the Village

In the 19th century, a number of New York’s more established German Jews believed that Jewish day schools would create an unhealthy division between Jews and their neighbors. At that time, Central European immigrants and their children were proudly becoming part of the American mainstream, with hopes of integration and success in American society. Ameri­can culture included integrated public schools, which was an important part of New York life, and was also an important tool for language learning and socialization of new generations of American Jews.

This shift necessitated a new kind of Jewish education which was designed to supplement, not replace, students’ public schooling. Rebecca Gratz established the first Sunday school in Philadelphia. In 1848, the Hebrew Education Society was founded, also in Philadelphia, to oversee instruction in Hebrew and in the Jewish religion. Plus, private synagogue Hebrew Schools had already begun to offer supplementary Jewish schooling for children in public schools. Teachers were largely volunteers and would teach in English.

In addition to wanting children to have Jewish education, there was another factor in the creation of Hebrew schools in New York especially. Churches functioned on the same blocks as synagogues in these busy immigrant communities. It was in response to the initiatives of Christian missionaries, who opened a school on the Lower East Side that offered to teach Hebrew to Jewish children with the agenda to convert them to Christianity, that the Hebrew Free School Association was formed in 1864. While assimilation into the Public School system of New York was important, Jewish communities were not interested in a kind of assimilation that included conversion. However, many immigrant parents weren’t able to afford private synagogue membership and schools for their children. And so, the Hebrew Free School Association was formed.

Many of the earliest synagogues in New York joined together, drafted, and circulated a notice to all the New York congregations. It read: 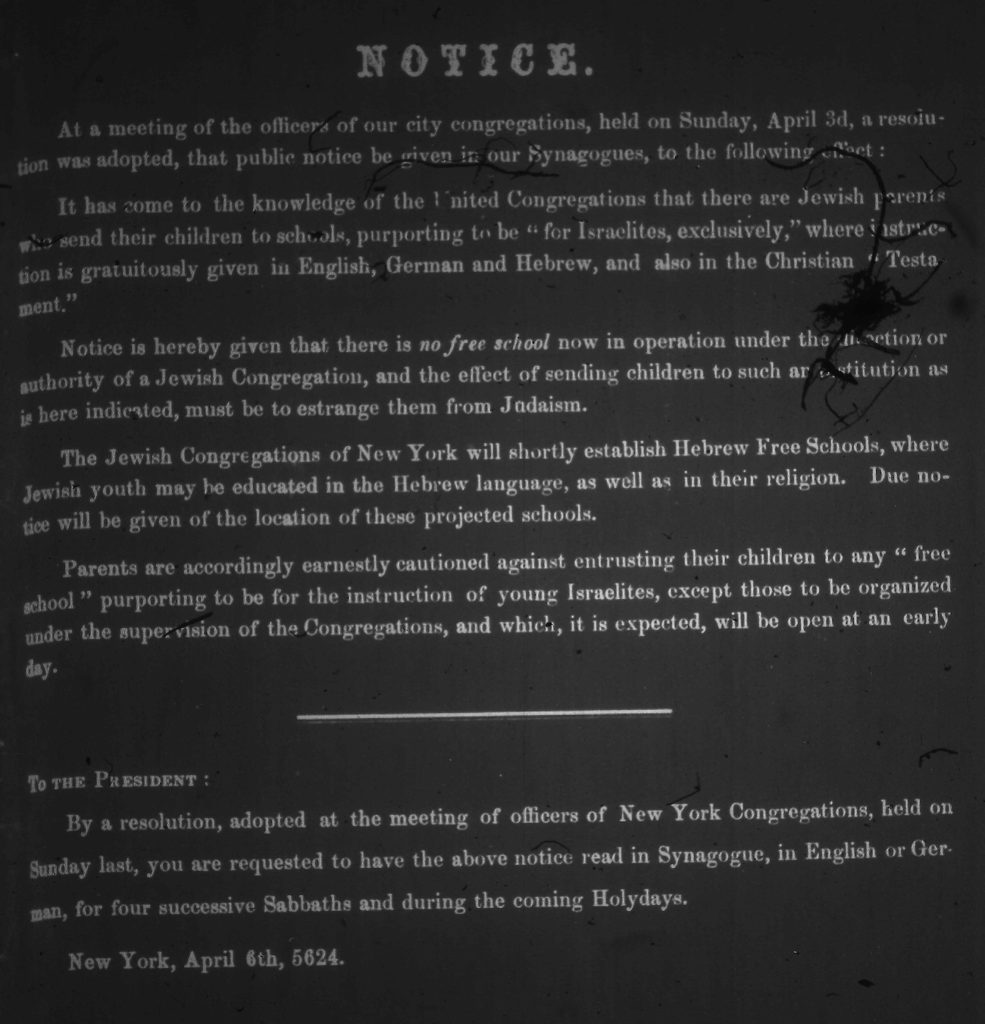 At a meeting of the officers of our city congregations, held on Sunday, April 3rd, a resolution was adopted, that public notice be given in your Synagogues, to the following effect:

It has come to the knowledge of the United Congregations that there are Jewish parents who send their children to schools, purporting to be “for Israelites, exclusively,” where instruction is gratuitously given in English, German and Hebrew, and also in the Christian “Testament.”   Notice is hereby given that there is no free school now in operation under the direction or the authority of a Jewish Congregation, and the effect of sending children to such an institution as is here indicated, must be to estrange them from Judaism. The Jewish Congregations of New York will shortly establish Hebrew Free Schools, where Jewish youth may be educated in the Hebrew language, as well as in their religion. Due notice will be given of the location of these projected schools. Parents are accordingly earnestly cautioned against entrusting their children to any “free schools” purporting to be for the instruction of young Israelites, except those to be organized under the supervision of the Congregations, and which, it is expected, will be open at an early day.

The request was made that this information should be read at every New York congregation for five weeks during the High Holy Days, to make sure that as many congregants as possible would hear this and understand to not send their children to the “Hebrew” Christian missionary school. The resolution was dated April 6, 5624 (which is 1864 in the Gregorian calendar).

It was through these announcements that the community was galvanized to form the Hebrew Free Schools, run by and for the Jewish community.

By 1868, New York’s Hebrew Free School Association consisted of 4 schools. The first two were housed at 36 Avenue C. There was a day-Hebrew school, with an enrollment of 458 students and a curriculum that included both General and Hebrew studies. There was also an afternoon Hebrew school, at the same address, which just taught Jewish subjects, to 88 children.

The third school was an afternoon Hebrew school that took place at Congregation Darech Amuno, then located at 136 Greene Street, between Bleecker and Houston Street. The total enrollment was 189 students. Founded by Dutch Jews in 1838, this congregation is now located at 53 Charles Street (which when they moved there in 1917 was still known as 2 Van Ness Place).  The congregation — one of the oldest in New York State and possibly the only surviving one founded by Dutch Jews — has a fascinating history, with no fewer than nine locations in their nearly two centuries of existence, all in Greenwich Village (in fact, for decades, Darech Amuno was the only synagogue located in Greenwich Village).  You can learn more about Darech Amuno on the Jewish History tour on our Greenwich Village Historic District interactive map)

The fourth school was an afternoon Hebrew school located at 205 East 27th Street. The school started with 108 students but only 62 remained by the summer.

More on Jewish history in Greenwich Village and the East Village

While 19th-century Jewish life in New York is more typically associated with points further south on the Lower East Side or on the Upper West Side, it’s striking that two of these three locations are in the East Village and Greenwich Village. Learn all about East Village Jewish historic sites on Village Preservation’s East Village Building Blocks Yiddish Rialto and Synagogues of the East Village tours, online. Learn more about the Jewish Greenwich Village Historic District here – including Congregation Darech Amuno. And, peruse our other Jewish-themed blog posts here.