Is that Flatbush, or is it Greenwich Village? The Prospect Lefferts Gardens Historic District was designated in 1979 by the Landmarks Preservation Commission, and as a result the neighborhood’s historic architecture can still be appreciated today. Walking through this historic neighborhood, one finds a wide array of beautifully crafted architecture from a mulititude of 19th and early 20th century styles, not unlike in Greenwich Village.  In fact, while one would be unlikely to mistake one neighborhood for the other, there is considerable overlap in the architectural styles in both neighborhoods, albeit often in very different forms.  There’s some other overlap in neighborhood history as well.

In 1661, a man named Pieter Janse Hagewout settled his family in a town called Midwout, now known as the neighborhoods of Flatbush and Midwood. Parts of our neighborhood also originally belonged to a Dutch landowner named Pieter (or Peter, or Petrus). Pieter Hagewout died that same year he and his family moved in, and his son Leffert Pieterse took over the family’s property, establishing the Lefferts surname. Over the years, the Lefferts family established a dynasty and used their power to develop their property from farmland into the lovely, bustling neighborhood which is now the Prospect Lefferts Gardens Historic District. Here are some of the architectural styles commonly found there, and in Greenwich Village as well: 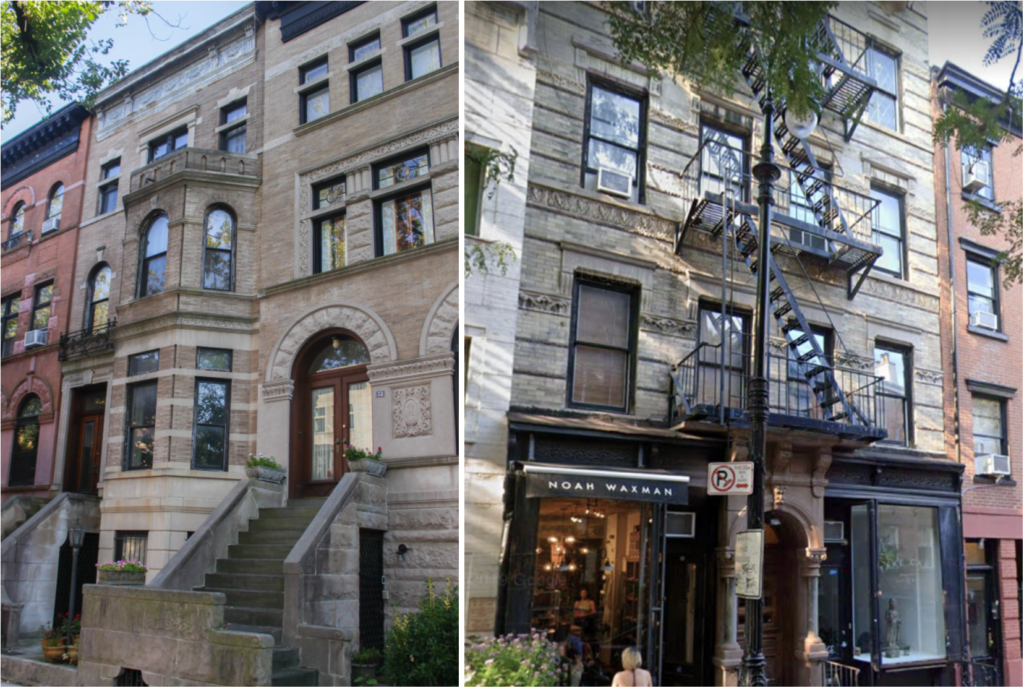 The Romanesque Revival style was popularized in this country by architect Henry Hobson Richardson.  After studying at the Ecole des Beaux-Arts in Paris, Richardson returned to the United States.  During the 1870’s he developed his very personal style which drew on eleventh-century Romanesque buildings, primarily from southern France and Spain.  Features include asymmetrical massing, building materials of varying colors and textures, and exuberant ornament.  The most identifiable feature of this style is the use of rounded arches for windows and doors.

On the south side of Midwood Street (pictured above left), a number of houses in the Romanesque Revival style can be seen. Nos. 52 and 54 were designed in 1898 by William M. Miller. Similarly, a tenement at 41 Perry Street in Greenwich Village (pictured right) built in 1898 also displays the Romanesque Revival style (designed by George F. Pelham for Jacob Klingenstein).  Unlike in Greenwich Village, though, these Midwood Street houses are among the earliest row houses built in Prospect Lefferts Gardens (Greenwich Village’s oldest extant house dates to 1799, while the East Village’s oldest extant house dates to 1795). Before that, the Flatbush neighborhood was mostly farmland, until John Lefferts broke up and auctioned off about 500 lots in 1887. By the late 19th century, the first wave of urban development had long since passed in Greenwich Village and the East Village, and new residential construction in these neighborhoods was typically in the form of tenements (like 41 Perry) to house the waves of immigrants flooding into these neighborhoods at this time, or in a few cases ‘French Flats’ or other early apartment buildings for middle- or upper-middle-class New Yorkers (middle- and upper-class apartment living didn’t become common in New York until the 20th century).  By contrast, the newly-built houses in Prospect Lefferts Gardens typically housed New Yorkers of more ‘vintage’stock, rather than recent immigrants or their families.

Due to landmark protections, both 41 Perry Street and 52 and 54 Midwood Street look much as they did when they were originally constructed at the end of the 19th century. 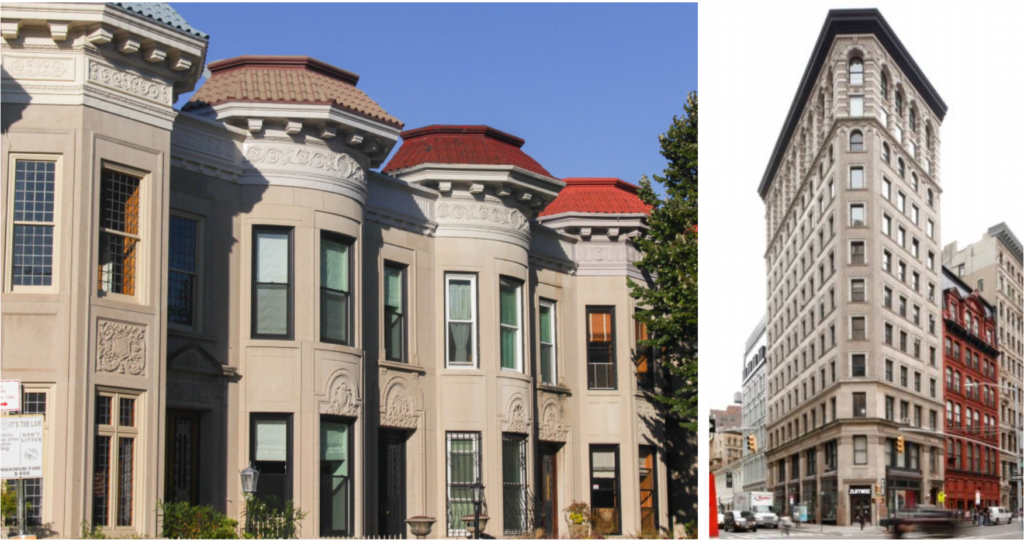 Maple Street between Bedford and Rogers Avenues (pictured left) in the Prospect Lefferts Gardens Historic District is home to a truly unique row of houses. The district’s designation report says “The flat-topped, polygonal, Spanish-tile roofs, which appear over each bay, are a motif not found elsewhere.” These lovely, unusual houses were designed in the then-popular Renaissance Revival style by Axel Hedman in 1909.

The Village has a number of Renaissance Revival buildings, albeit generally larger structures than their Prospect Lefferts Garden counterparts.  That’s because by the time this style came into vogue around the turn of the last century, houses were for the most part no longer being built in Greenwich Village, and new construction typically took the form of tenements or larger commercial or loft buildings, as industry was greatly expanding in this neighborhood at the time.  A prime example is 840 Broadway (pictured right), built for garment industry tenants between 1899 and 1901. Before clothing manufacturers clustered in the area known today as the Garment District, they actually had a strong presence in this part of Greenwich Village and what we today call NoHo. Learn more about this building and its recent designation as an individual landmark in June 2019 by the LPC here.

Renaissance Revival architecture was popular in the early 1900s, but hearkened back to the forms and motifs of the Italian Renaissance of the 16th century. Renaissance Revival buildings can be identified by the roof and the façade. Roofs tend to be low-pitched and hipped, and even tiled, with wide overhanging eaves – as is the case with the two examples above. Similarly, ornate facades with square windows but rounded arches and decorative elements draw further similarities. Here as well, landmark designation helps ensure that these building’s original form and details remain intact for the future.

Federal-style architecture was popular between the Revolutionary War and about 1835, and derived from the English Georgian style. Federal row houses were modest in scale and restrained in ornament. The houses are clad in red brick which was typically laid in what is known as a Flemish bond (bricks are laid alternating the long side and short end showing). Brownstone and marble were used at the door surrounds and window lintels and sills. A brownstone stoop brings visitors into the parlor level, with a service entry below to the basement. Neo-Federal brought this style back in the late-19th and early 20th centuries.

A large number of homes in Prospect Leffert Gardens Historic District were designed in the Neo-federal or Georgian Revival style in the early 20th century. On Midwood Street, numbers 25-35 (pictured left) are classic examples. They were designed by Slee and Bryson in 1915. The row has identical houses on either end to give it a mirror effect.

Similarly, the Village is home to a number of well preserved federal style homes, and one or two Neo-federal or Georgian revival style homes. For example, 116 Sullivan Street (above right) was built in 1832, originally with a sloped roof and dormers like its later counterparts on Midwood Street.  In 1872 it had a full fourth story and flat roof added, in 1973 it was designated an individual New York City landmark.  In 2016 it was included in the Sullivan Thompson Historic District. 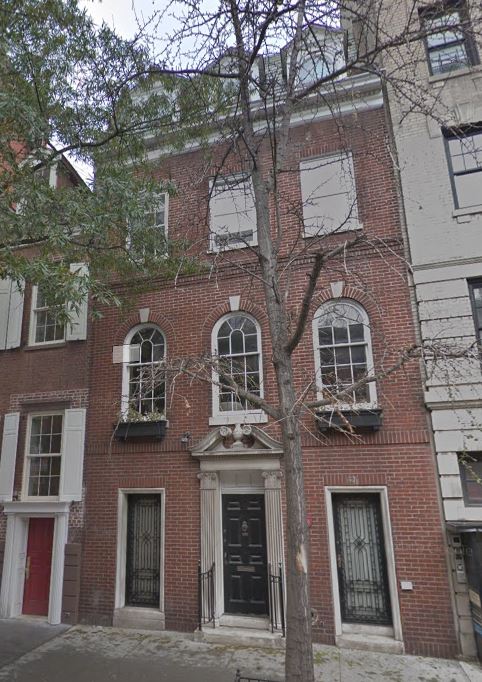 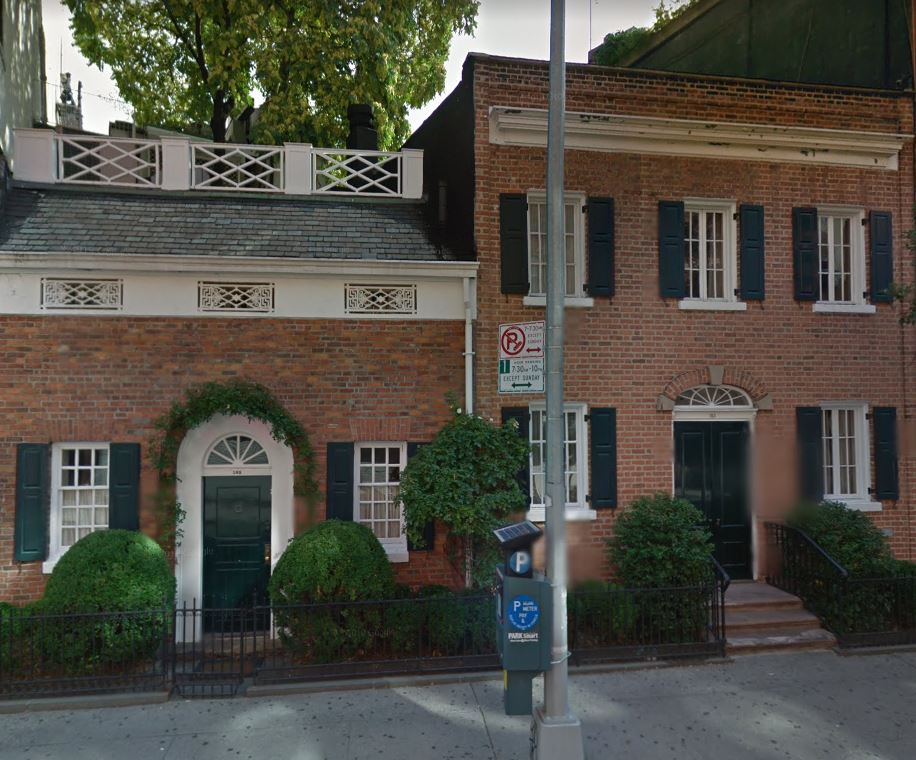 By contrast, 121 Washington Place (above, top) and 183-185 West 4th Street (above, bottom) date to around 1920 (well, their facades anyway; these are remodelings of previously built structures) and are designed in the Neo-federal or Georgian Revival style.  Like 25-35 Midwood Street, they harken back to the Federal-style houses of the early 19th century, but in this case those originals can be found literally just a few doors down on the same block, as opposed to a subway ride away for the Midwood Street houses.

To learn more about the federal style, you can read Village Preservation’s detailed report on the one hundred thirty-six Federal-style houses of Lower Manhattan which we have helped to get landmarked, listed on the State and National Registers of Historic Places, or both.

2 responses to “Beyond the Village and Back: Architecture in Prospect Lefferts Gardens”