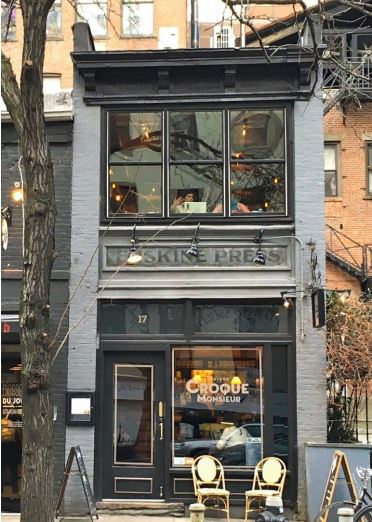 This charming and diminutive building bears a remarkable connection to the history of the surrounding area south of Union Square which Village Preservation is fighting to get landmarked as a center of publishing and printing, as an artistic center, and as a font of feminist activism.  All came together in the work of the writer Anaïs Nin, one of the 20th century’s most revolutionary female writers, who established her own press in this building in the 1940s.

17 East 13th Street was built in 1911 as a two story brick store at a cost of $3,500 according to Office for Metropolitan History, “Manhattan NB Database 1900-1986,” (10/29/19), http://www.MetroHistory.com. It was designed G.T. Goosey and owned by Charles H. Benke and Rudolph C. Faber. The 1911/12 Trow’s Directory of Manhattan lists Archibald and George C. Erskine, printers, at this location and likely its first tenant (a painted sign saying “Erskine Press” remains on the front façade of the building to this day). The previous directory shows them at 22 East 13th Street, another extant building within the south of Union Square area Village Preservation is seeking to have landmarked as an historic district.

Erskine Press was started by Archibald Erskine (1831-?), a Scottish immigrant and carpenter by trade. According to the Printing Trades Blue Book of 1918, the company was established in 1895 and the 1896/97 Directory first lists Archibald as a carpenter and a printer with the printing business at 22 East 13th Street. By the time that Erskine Press moved into 17 East 13th Street, two of Archibald’s sons, Archibald Erskine, Jr. (1870-1946) and George Chambers Erskine (1873-1958), had taken over the business.

Sometime in the second half of the 1930s, Erskine Press closed. According to the diary of Anaïs Nin, The Villager was the tenant at 17 East 13th Street, prior to when she and her lover Gonzalo More moved their printing company, Gemor Press into the building in 1944.  Nin (1903-1977) was an essayist and memoirist; she also self-published and very often re-published her text when it went out of print. Today she is regarded as one of the leading female writers of the 20th century and a source of inspiration for women challenging conventionally defined gender roles.

Nin and More first established their press at 144 MacDougal Street in 1942.  The first book that they published was a new edition of Nin’s most recent work, Winter of Artifice.  According to Nin’s diary, special care and thought went into all aspects of the printing process, including the selection of the type face, the quality of the paper and the accompanying engravings. The books themselves were special artifacts in their own rights, and an extension of the author’s writings and creative process.

Winter of Artifice Sells Out

This edition of Winter of Artifice sold out within one month, without the benefit of marketing. The press would publish works by other authors as well, including Max Ernst and Hugh Chisolm.  The next book of Nin’s they published had been printed in Europe prior to the Spanish Civil War, Under a Glass Bell, which received strong reviews, including by Edmund Wilson of the New Yorker. 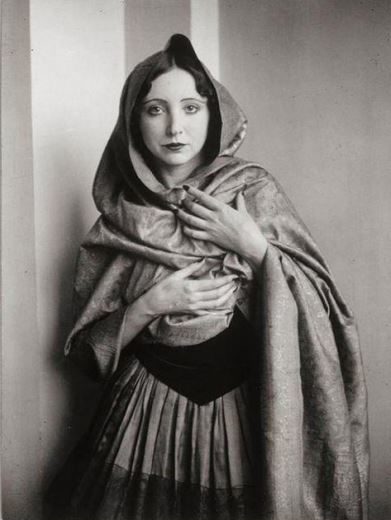 Nin agreed to rename the business Gemor Press (although ‘Gemor Press’ was already imprinted on the first edition they published of Under a Glass Bell). They borrowed money from a bank, bought a bigger press, and moved to 17 East 13th Street at a considerably higher rent.  But the location appealed to More due to its more visible location with a storefront to showcase their work. At the time this location was also close to many other press operations and printing houses just to the west, and to a book sellers row along Fourth Avenue. Other presses in the neighborhood included the Bookazine Company at 43 East 10th Street, the MacMillian Company at 60-62 Fifth Avenue and Gin & Company at 72 Fifth Avenue, to name just a few. 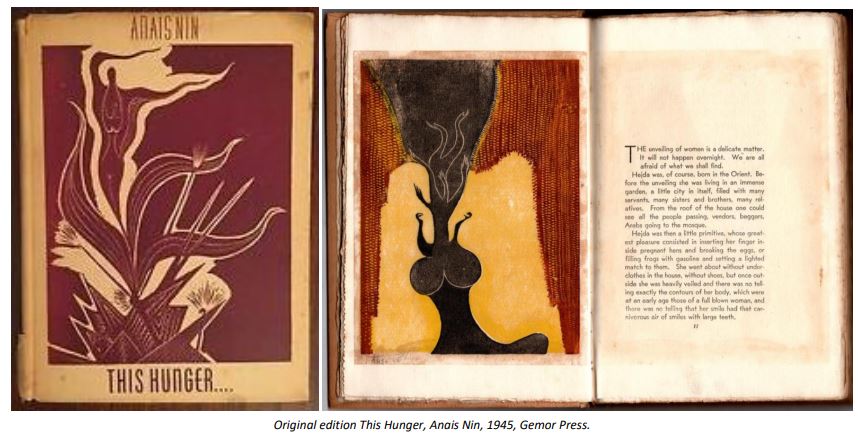 In September of 1945, Gemor Press released Nin’s new book, This Hunger, with which Nin was very involved with the printing. At a thousand copies, this was Nin’s largest edition to date. This publication got Nin noticed by other publishers. Most wanted her to change her style and the approach of her writing to be more mainstream, something which Nin resisted. At the suggestion her new friend Gore Vidal, she signed a contract with Dutton publishers, earning an advance of $1,000 without having to compromise her writing style at all.

Shortly after the publication in November of 1946 of her first book with Dutton, Ladders to Fire, Gemor Press left 17 East 13th Street due to, as Nin wrote in her diary, “Gonzalo’s irresponsibility.”

The large press was sold to pay debts and More brought the smaller press home. He would continue to print small print jobs including two works of Nin’s: A Child Born Out of the Fog and a new edition of the 1936 House of Incest, both in 1947.

This period (1942-47) in which Nin and her press were located at 17 East 13th Street was significant both for connecting Nin to an American audience and to a large publisher, and for expanding her role and autonomy in her publication and in developing her creative process. Becoming associated with Dutton gave her the recognition of her work that she sought and the time to concentrate on her writing. Although she no longer participated in the typesetting after this time, she continued to self-publish limited edition paperbacks of her books that were out-of-print. She established the Anaïs Nin Press to distribute these works which did so until the late 1950s when she partnered with Swallow Press to publish her works.

According to Professor Emily Larned in her intriguing essay The Intimate Books of Anaïs Nin – Diarist as Letterpress, “Today when a contemporary reader finds a book by Nin, it is often a slim, inexpensive paperback printed on cheap paper, with a glossy, ill-designed cover strewn with garish colors and art deco type. How different this reading experience is from hovering over the dark, hushed, carefully made letterpress editions produced by Nin’s own hands.”  And the building where she made this magic happen is still standing.

Village Preservation research has uncovered exciting and illuminating information about the significance of the area of Greenwich Village and the East Village south of Union Square, and submitted a 25-page letter to the NYC Landmarks Preservation Commission with the materials, calling for the agency to finally act to extend landmark protections to the area – read it here. With the increased pressure on the area from the beginning of construction on the 14th Street Tech Hub, the recent demolition of the St. Denis Hotel (80 E. 10th Street; 1855 – to be replaced by this) and the completion of the woefully out-of-scale tech office tower at 808 Broadway, the time is now for the city to act to protect this incredibly historically rich but endangered area.

3 responses to “Why Isn’t This Landmarked?: The Erskine Press Building, 17 East 13th Street”