AMERINDA, American Indian Artists, Inc., is the premier Native American multi-arts services and the only independent, multi-arts organization of its kind in the United States, serving emerging and mid-career Native American artists. Founded in 1987, Amerinda catalyzes Native American performing, visual, literary and media artists, and promotes awareness of these artists. AMERINDA presents curated exhibitions of contemporary Native art and stimulates research into the history and trends of Native American contemporary expression. AMERINDA is the steward of the New York Contemporary Native American Art Movement and as such fosters the advancement of tribally-enrolled Native Arts community. This incredible organization has its headquarters in the East Village at the St. Nicholas of Myra Orthodox Church at 288 East 10th Street.

Recently AMERINDA reached out to Village Preservation and identified sites in our area which are significant within the Native American Arts community, and we thought we would share them with you today.

Washington Square Methodist Episcopal Church at 135 West 4th Street
The Spiderwoman Theater Ensemble was launched in 1976 at this Greenwich Village church by original members and sisters Lisa Mayo, Muriel Miguel and Gloria Miguel from the Kuna and Rappahannock nations. The Spiderwoman Theater Ensemble is the oldest Native American feminist theater group in the United States, and one of the leading performing arts groups to emerge out of the New York movement, gaining national and international attention. Additionally, this ensemble is the oldest continuing feminist theater group in the United States and internationally. Their work explores the issues of gender roles, cultural stereotypes, sexual and economic oppression – sexism, racism, classism, and violence against women.

Spiderwoman Theater’s unique “story-weaving” methodology infuses traditional storytelling genre with organically layered movement, text, sound, music and visual images. This culminates into a powerful voice for indigenous women and cultural artisans. They founded the Native American Women Playwrights Archive at Miami University in Ohio where they received honorary Doctorates of Fine Arts in 1997 for their life’s work and contribution to the theater. 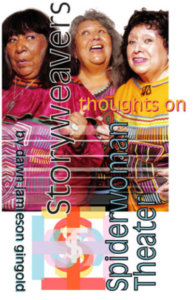 La MaMa Theater, 66 East 4th Street
The Native American Theater Ensemble (NATE), founded 1971 by Hanay Geiogamah (Kiowa and Delaware nations), made its debut performance at La Mama Theater of its first piece, Body Indian, in 1972. This event signified the beginning of contemporary Native American theater in the United States. Geiogamah is a visionary and fulfilled a pivotal role for the times in which the New York contemporary art movement was emerging in the late 1960s and early 1970s.

Theater for New York City (TNC), 155 First Avenue
Thunderbird American Indian Dancers was founded by Louis Mofsie (Hopi-Winnebago) in 1963. The group is in-residence at Theater for the New City and it is is the oldest resident Native American dance company in New York. This all-volunteer group was founded by a group of ten Native American New Yorkers from the Mohawk, Hopi, Winnebago, and San Blas tribes. They founded the group to keep alive the traditions, songs, and dances they had learned from their parents and added to this knowledge from other tribes also living in New York.

The company has held a monthly powwow in the city continuously since its founding, stage a large annual summer powwow in New York, have a scholarship fund, and perform all across the United States and internationally. The troupe specializes in educational programming for schools, clubs and civic organizations. The collaboration with the Theater for the New City (TNC) began in 1975 and continues with a Winter Solstice Powwow every year. In addition, the Theater has been presenting the Thunderbird American Indian Dancers annually since 1976, the proceeds from which go to the Thunderbird American Dancers Scholarship Fund.

Tanager Gallery, 90 East 10th Street
This artist-run studio that was located at 90 East 10th Street during the 1950s and 60s exhibited artists of various mediums and movements – sculptures, painters, photographers, and performance artists, Abstract Expressionists, American Realists, Pop Artists, and Collagists. One such artist was George Morrison (1919-2000, Chippewa) who exhibited there from 1952 to 1962 with Joan Mitchell, Robert Rauschenberg, and Ad Reinhardt. His studio was on East 9th St. near Cooper Union.

George Morrison was born on the Grand Portage Indian Reservation in Minnesota. He came to New York in 1943 with a scholarship to the Art Students League. Around 1954 he met Franz Kline, Jackson Pollock, and Willem de Kooning. Influenced by surrealism and Abstract Expressionism, he began showing in New York galleries and at the Whitney Museum of American Art. In addition to his cubist and abstract expressionist vocabulary, Morrison created mosaics with found materials of Provincetown on Cape Cod. He was a co-founder of the New York Movement of Contemporary Native American Visual Art.

To learn more about AMERINDA and the work that they do, go to http://amerinda.org.