Emma Goldman was born in Kovno, Lithuania in 1869. By the time she was 23 years old, she was a divorced American citizen under arrest. For everything from being associated with anarchists to “inciting a riot” in Union Square, Emma Goldman served her time. This was just the first of many arrests for this rabble-rouser, once labeled by the FBI as “the most dangerous woman in America,” which eventually led to her deportation. While she was here, though, this intrepid woman lived at 208 East 13th Street in the East Village and made big waves in almost every social justice movement around in the late 1800s and early 1900s.

Here’s a rundown of her run-ins with the law:

Her implication in attempted murder, Fall, 1892

This arrest was related to Goldman’s work with the labor movement. When one of her comrades, Alexander Berkman, was arrested for attempting to shoot Henry Clay Frick, the manager of the Carnegie Steel Company, Goldman was implicated in the crime. That summer, Goldman chaired a meeting of over three hundred anarchists to discuss Berkman’s act as an opportunity to explore the anarchist movement’s stance on violence. Berkman was found guilty, and in the pandemonium of that announcement, Goldman was arrested. 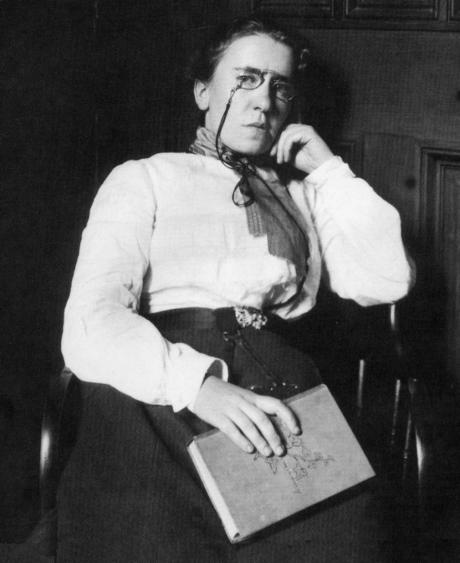 Again in Union Square, Goldman organized a march on August 21st, which 1,000 people attended. Emma preached that workers have a right to take bread if they are hungry, and to demonstrate their needs “before the palaces of the rich.” The press characterized her speech as “incendiary.” Goldman traveled to Philadelphia to give a speech to the unemployed community there but was intercepted in her travels by the police, who arrested her for incitement to riot. She served one year on Blackwell’s Island (today’s Roosevelt Island) for aiding and abetting an unlawful assembly.

Arrests Outside of New York

Goldman did a lot of traveling for lectures and actions around the country and the world, though her home base was always the Lower East Side. In 1897, the mayor of Providence, Rhode Island threatened Goldman with arrest if she spoke in Providence. Of course, she did; this was part of a national speaking tour. Goldman talked on subjects including “Why I am an Anarchist-Communist,” “Woman,” “Marriage,” “Must We Become Angels to Live in an Anarchist Society?,” and “Berkman’s Unjust Sentence.” So, she was arrested on September 7, 1897 and given twenty-four hours to leave town or face three months imprisonment.

Come 1900, anti-dissident rhetoric became more and more prominent in the national discourse. On September 6th, 1901, President William McKinley was shot by self-proclaimed anarchist Leon Czolgosz in Buffalo. Police claimed that Czolgosz was inspired by one of Goldman’s lectures. She was in Chicago at the time, and went into hiding immediately, but the Chicago police found her and subjected her to intensive interrogation on September 23, 1901. President McKinley died on Sept. 14, and while Czolgosz was sentenced to the death penalty, the charges against Goldman were dropped.

The Immigration Act of 1903, also known as the Anarchist Exclusion Act, was passed by Congress on March 3, 1903. This law tightened immigration rules and added four inadmissible classes: anarchists, people with epilepsy, beggars, and “importers of prostitutes. The Act made it much easier for Goldman to be targetted for her political beliefs, which she proudly broadcast to all who would listen (and, certainly, some who would have preferred not to).

On October 30, 1906, Goldman was arrested for articles published in Mother Earth and for inciting to riot. Mother Earth was founded in Goldman’s apartment at 208 East 11th Street, where Goldman lived from 1903-1913. For several years beginning around 1906, Mother Earth had an office in the building next door.

A New Decade and Deportation

The 1910s found Goldman immersing herself in the movements for feminism, suffrage, free speech, free love, birth control, and the eight-hour workday, among other battles.  It took only 14 days of the new decade to see Goldman back behind bars. She was arrested on January 14, 1910, on charges of conspiracy against the government. The case was dropped on January 28th. Goldman was arrested six times in Denver, Cheyenne, Wyo., San Diego, Seattle, Portland, and New York’s Union Square again on charges of “peddling bills without a license,” distributing birth control literature, an conspiracy to violate the Draft Act between 1910 and 1917.

Goldman’s arrest in Union Square on February 11, 1916 was a result of her outspoken campaign for legalized birth control, believing that contraception was essential to women’s social, sexual, and economic freedom. It would take almost another 50 years before the FDA approved legalized birth control pills. This work drew attention from partners in the movement such as Margaret Sanger and Helen Keller, and foes in law enforcement and government.

This aggressive act set penalties of up to twenty years imprisonment and fines of up to $10,000 for persons aiding the enemy, interfering with the draft, or encouraging disloyalty of military members. It also criminalized all written material advocating treason, insurrection, or forcible resistance to the law. Later that year, Goldman and a comrade were arrested in New York again on conspiracy charges. Her bail was set at a staggering $25,000. There were many protests against the war and the Espionage Act in and around the Village during this time.

Goldman consulted with some of her closest associates, including Villagers John Reed, and Max Eastman. They all agreed to help with her trial, but between the anarchists’ outspokenness and the pressures of the law and the pending World War I, the scholars kept their distance.

Goldman pled not guilty, but also stated: “We believe in violence and we will use violence.” She was found guilty and given the maximum sentence — two years in prison and $10,000 fine. Judge Julius Mayer recommended her deportation as an “undesirable alien.” Goldman was still in prison when she was served with her last arrest warrant, which included a deportation order, on September 12, 1919. When she was released from prison, she was immediately detained at Ellis Island on December 5, 1919. Despite many appeals and fundraising efforts, Goldman was deported on December 21, 1919, and along with 248 other radical aliens set sail on the S.S. Buford, bound for Russia.

Goldman continued her work internationally, but her heyday of arrests and rabble-rousing in New York was over. In 1939 Goldman moved to Canada, where she died, in Toronto, in 1940. She was buried in Chicago near the Haymarket martyrs who first inspired her in 1887.

One response to “The Many Illustrious Arrests of Anarchist Emma Goldman ”