The area south of Union Square is rich in architectural and social history which needs and deserves historic district (landmark) protections, which we have been fighting for but the City has resisted granting. In the case of the former McCreery’s Dry Goods Store at 801-807 Broadway — one of the most important buildings of 19th century New York, which gained a new lease on life a hundred years later that made it one of the most consequential buildings in 20th century New York —  we have been fighting for its designation for many years. 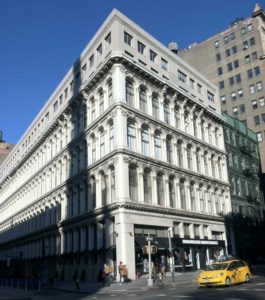 James McCreery & Co. Dry Goods opened its doors in 1869.  Mr. James McCreery, an Irish immigrant, was employed by Ubsdell, Pierson & Lake, a department store located on Broadway and Grand Streets.  He worked his way up to become a partner in the company.  Upon Lake’s retirement in 1867, the company was renamed James McCreery & Company.  McCreery then commissioned a new store on Broadway and 11th Street, responding to the area’s growing population of wealthy New Yorkers who were moving north of Washington Square.   The building was designed by architect John Kellum, known for his work in the then-new medium of cast-iron.  Kellum incorporated into the design a new kind of show window with extensive glazing. The opulent Italianate/French Second Empire style provided an appropriate setting for the extravagant goods housed inside, namely the luxurious silks unavailable elsewhere.

Focusing on the female shopper, the store catered to the monied carriage trade.  Before long, The New York Times would deem it “one of the most highly esteemed dry goods establishments in America.”  In 1872 the newspaper commented on the store’s goods:  “Shawls, silks and furs, of good quality, and especially suited to the season, may be obtained at McCreery & Co.’s establishment, Broadway and Eleventh-street.  They have recently added largely to their stocks, and now offer a fine selection of goods intended for ladies’ use.”

Around 1895, McCreery followed the department store trend up to “Ladies’ Mile,” 6th Avenue between 14th and 23rd Streets, when he opened his second store on 6th Avenue and 23rd Street.  According to CastIronNYC.org, “McCreery sold the [11th Street] building to the Methodist Book Concern and Missionary Society and leased back space in the lower floors; McCreery repurchased the building in 1889. James McCreery & Co. remained in the building until 1902.  By 1910 the original mansard roof had been replaced….and the storefront housed Fleischman’s Restaurant.”  The upper floors were occupied by factories that produced suits, shoes, and leather wares.

In 1966 801-807 Broadway became one of the first structures in New York City to be considered for individual landmark designation by the Commission due to its overwhelming architectural and cultural significance.  However, in 1971, a fire began in one of the factories in the building and destroyed the interior of the building before designation could take place. However, it remained under consideration for landmarking, or “calendared,” for the next 50 years. Thanks to the cast-iron construction, the façade was left unscathed by the fire. In 1972, the building was purchased by the Elghanayan brothers. When their intentions to demolish the remaining shell and erect a high-rise apartment building in its place were announced, the community protested.  Residents rallied along with the Friends of Cast Iron and community groups, appearing before the Board of Appeals.  In response, the Board Standards and Appeals granted variances that, for the first time, made adapting a cast-iron structure such as this to residential use feasible and legal, thus paving the way for a slew of similar such conversions in Lower Manhattan and throughout New York that would follow. 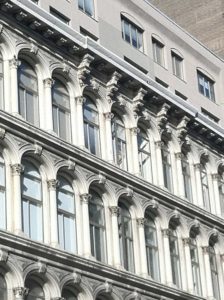 Stephens B. Jacobs Group, PC, architects, was commissioned to transform the burned shell into 144 apartments – no two of which are identical.  The large, arched windows, the interior Corinthian cast-iron columns, and the original high ceiling dimensions were retained, resulting in dramatic spaces. The later one-story addition which had replaced the mansard roof was removed, and two setback stories were added.  It was renamed the Cast Iron Building.  Completed in 1974, it was the first renovation of a cast-iron building into conventionally-financed housing and a fine example of re-purposing vintage structures. Much of the structure’s original cast-iron façade from the 19th century remains intact.  And at the same time, the late 20th century alterations reflect one of the most consequential and influential building transformations in Lower Manhattan and New York of the last half-century, thus making 801-807 Broadway arguably of even greater significance now than when it was first calendared by the Commission in 1966.

In 2014, 801-807 Broadway was among 95 sites that had been calendared for designation for several years that the NYC Landmarks Commission proposed to ‘de-calendar’ or remove from the list of sites under consideration for designation, with no opportunity for public comment or for consideration of the individual merits of each site. Village Preservation, fellow preservation groups, and elected officials pushed back strongly against this plan, calling instead for a transparent process allowing public comment and consideration of each individual site. The Commission listened and each building was permitted a hearing. Although 801-807 Broadway was not landmarked, it was removed from the list without prejudice, meaning that it could be considered for designation at a future time.

801 Broadway’s impressive architecture and role as both one of the premiere commercial palaces of 19th century New York and one of the most consequential buildings of 20th century New York warrants recognition and preservation.  Currently lacking in landmark protections, this and many surrounding buildings in the area south of Union Square could be altered or torn down at any time, such as the former St. Denis Hotel across the street at 799 Broadway/80 East 11th Street, which was demolished in 2018 and is now being replaced with a large glass and steel tech office building.

If you would like to change that, please send a letter to city officials urging landmark designation for this and surrounding buildings here.