The Trump SoHo was approved for construction by the City on May 8, 2007, over the objections of dozens of elected officials and a broad coalition of community and business groups from across New York led by Village Preservation. Unfortunately, the City decided that the interests of deep-pocketed developers “trump” zoning protections for our neighborhoods, and the Department of Buildings and then-Mayor Bloomberg apprenticed themselves out.  The 45-story building now known as The Dominck continues to make the national and international news.  We fought the City hard to prevent the building’s construction, which we contended violated zoning laws.  But then Mayor Bloomberg and elected officials like then-Borough President Scott Stringer and then-City Council Speaker Christine Quinn disagreed, and the project went forward, with just a promise of enforcement to prevent zoning violations, in the form of a “restrictive declaration” for the site, which was first filed on April 30, 2007.  But that’s just the beginning of the story.

This all stems from the hotel’s structure as a ‘condo-hotel,’ which Village Preservation and the SoHo Alliance long argued made the project illegal.  The City considered the building a “transient hotel” even though they were sold to individual buyers who could live there for much if not all of the year (the zoning for the area prohibited residential and “residential hotel” uses). We contended that because of this use, permits should never have been issued for the project to allow it to be built. Unfortunately, city and elected officials disagreed, and the project was allowed to be built. 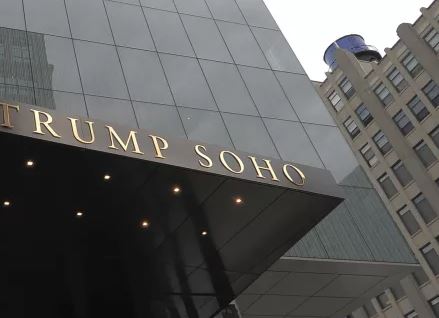 In spite of Trump and his partners repeatedly advertising the development as a “residence,” the City issued permits and allowed it to move ahead.

Then Trump hit upon human remains from the burial ground for a 19th century abolitionist church which had been located on the site.  While stopping the project briefly, the City still allowed Trump to move ahead.

Then the long and sordid criminal records and backgrounds of several of Trump’s business partners in the Trump SoHo were revealed, and yet the City allowed the project to continue.

Then a fatal accident at the building killed a construction worker.  But the City still let Trump move ahead.

Village Preservation and the SoHo Alliance took the case to court to contest the granting of the permits, claiming it violated the City’s own zoning regulations.  The City spent taxpayer dollars to defend the Donald’s project in court.  Quinn and Stringer refused to support the community’s case against Trump.  The Board of Standards and Appeals led by then-Chair Meenakshi Srinivasan (later Mayor de Blasio’s Chair of the Landmarks Preservation Commission) ruled in favor of Trump and allowed the project to proceed.

At the Trump SoHo opening, we and other protesters were threatened with arrest by the NYPD if we did not move our protest a block away from the building site, out of view of the jet-setting guests who were arriving for the party.

The deal required that the Trump SoHo undergo annual independent audits of its records to prove that the development was not being used for illegal residential or residential-hotel purposes. This is supposed to include an electronic record-keeping system that tracks every individual who goes in and out and stays overnight or nights. Trump SoHo was legally required to submit the “independent audits” (actually just audits performed by an outside auditing firm hired by the Trump SoHo) of these records to the City each year for their inspection and review to ensure the law was being followed. 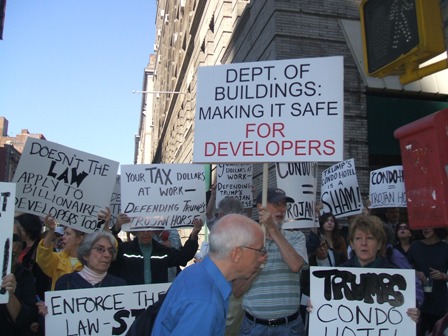 In the intervening time, we found numerous indications that city officials knew that the Trump SoHo was being used for purposes that violated the zoning.

We filed a Freedom of Information request, which city officials were legally obligated to follow, demanding any materials pertaining to the legally-required audits.

As a result, we discovered some very disturbing information. We found that in the first six years after the Trump SoHo’s construction, none of the legally-required audits which were supposedly a condition of the project being built had ever been submitted. Incredibly we found that no penalties had ever been issued for the Trump SoHo’s failure to submit the audits, as provided for under the terms of the agreement under which the development was allowed to be built — see letters here.  We had reached out numerous times to the Mayor’s office, the Department of Buildings, Borough President Stringer, and City Council Speaker Quinn about the lack of enforcement of the supposedly “required” restrictive declaration.  We got no response. 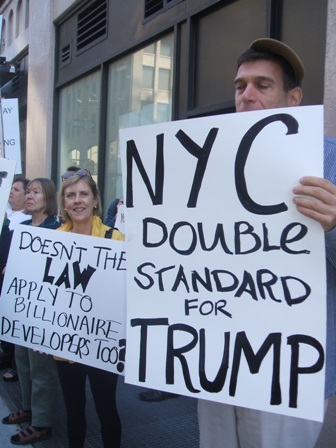 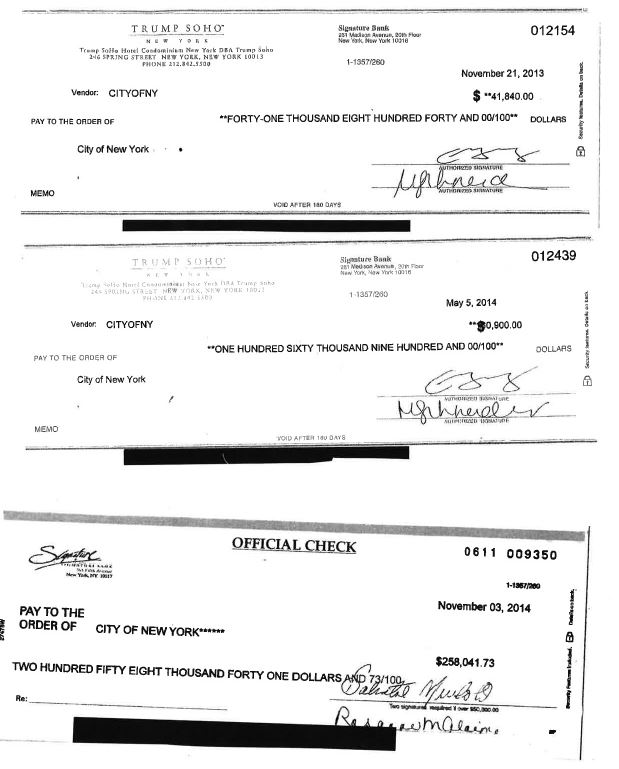 Just before Thanksgiving in 2017, the Trump Organization announced it was pulling out of the Trump SoHo Condo-Hotel. Reports indicate that poor economic performance at the development was behind the move.  While many factors have affected the Trump SoHo’s poor performance, no doubt one was the long-overdue enforcement of zoning regulations restricting the use of the “condo-hotel,” which Village Preservation has fought relentlessly to ensure was done.

The Trump SoHo should never have been allowed to be built, and it continues to offer a case study in government oversight gone horribly awry. But we will continue to do everything in our power to ensure that no one profits from illegal uses here, and that those regulations which were put in place here to ensure compliance with the law continue to be enforced as rigorously as possible.

This year the 2019 Occupancy Report was filed almost a month late.

According to the accountant’s report, four units experienced exceedances in the staying limit.

This year the City of New York received a check in the amount of $16,290.44 in the self-reported penalties.

The Restrictive Covenant does allow for the city to demand more from the former Trump SoHo.  According to the covenant, the city can mandate that the owner hire at their own expense an Independent Private Sector Inspector General, a.k.a. a “Compliance Monitor,” whose duties can entail a Full Audit and Investigation.  This has never happened, though we have called upon the City to do so.

Will the administration ever find a reason to?  The Trump Organization stopped being involved in November of 2017 with this development, and the document retention requirements of the Restrictive Declaration only last three years, so the opportunity to have an independent review by the city of what what done here during the Trump SoHo era is quickly coming to an end. Will the de Blasio Administration invoke this oversight authority before the three year document retention requirement ends in November of 2020?

Village Preservation is keeping a close eye on adherence to the rules here, no matter the name by which it is called or who the latest investor is.