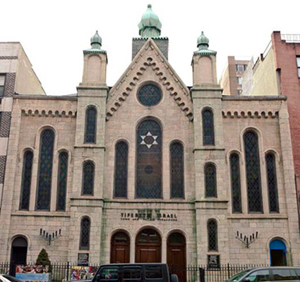 Built as a German Baptist Church in 1866 and converted to a Ukrainian Autocephalic Orthodox Church in 1926, 334 East 14th Street (1st/2nd Avenues) has served as the Tifereth Israel Town and Village Synagogue since 1962. Designed in a distinctive German Romanesque style displaying the roots of the original congregants, over time onion domes were added and crosses removed to reflect the building’s new occupants. In 1966, just a year after the NYC Landmarks Preservation Commission (LPC) was created, the building was ‘calendared’ and considered for landmark designation. For reasons no one seems to recall, the Commission never voted on the proposed designation, and the building remained in “landmarks limbo” for almost fifty years. After a campaign by Village Preservation, preservationists, and local leaders, it was finally designated a New York City Landmark in October 2014.