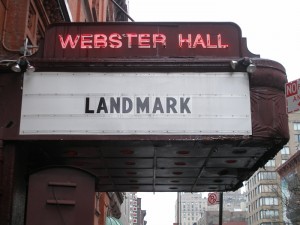 In the summer of 2007 Village Preservation supplied the Landmarks Preservation Commission with the extensive research on the history of Webster Hall, and urged the LPC to landmark the site; shortly thereafter the Commission voted to consider the building for landmark designation, and in spring 2008 the building was officially designated a New York City landmark.

In addition to its architectural interest, Webster Hall embodies much about the social, political, and cultural history of downtown and the East Village. Originally a “hall for hire,” from the late 19th century through World War II Webster Hall was the scene of labor rallies, drag balls, costume bacchanals, and political protests. After World War II, it became an important performance venue for emerging Latin artists and folk musicians, and then a recording studio used by Elvis Presley, Frank Sinatra, and Julie Andrews, and for the recording of soundtracks for Hello Dolly and Fiddler on the Roof.