Bell Labs on West Street: Seven Decades of Innovation that Changed our WorldA history before Westbeth

Bell Labs on West Street:
Seven Decades of Innovation that Changed our World: A history before Westbeth

Before the collection of buildings we know today as Westbeth became a sanctuary of affordable housing and studio space for artists, it was the home of Bell Labs. About 4000 scientists and engineers worked at this imposing space overlooking the Hudson River at the western edge of Greenwich Village.

Bell Labs has its roots in the consolidation of several engineering departments within the American Telephone & Telegraph (AT&T) company and the Western Electric company, the manufacturing organization for the Bell System. As the emerging telephone business took hold in the 1920s, attention increasingly turned to exploring fundamental areas of science. The result: breakthroughs that led to the development of fax machines, television transmission, public address systems, sound motion pictures, commercial radio stations, and much more.

Ed Eckert, archivist for Bell Labs, will present a lecture and slideshow about the rich history of creativity and innovation that took place at 463 West Street, before it became Westbeth. 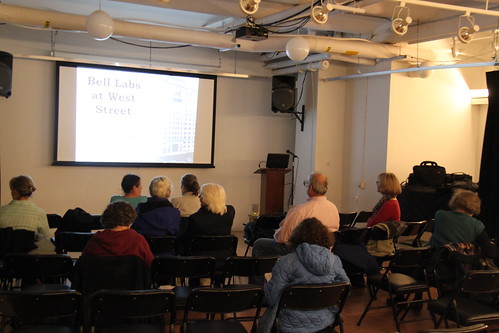