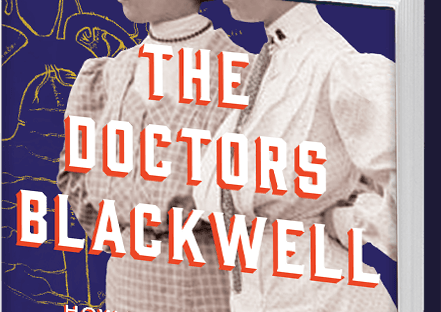 Join us to celebrate the 200th birthday of the first woman doctor in America and heath care pioneer Elizabeth Blackwell, and the release of Janice P. Nimura’s dual biography The Doctors Blackwell on the groundbreaking sisters and doctors Elizabeth and Emily Blackwell. Nimura will be joined by Dr. Vivian Pinn, recipient of the Blackwell Medal of the American Medical Women’s Association, and Jill Platner, owner of the building on the corner of Bleecker and Crosby Streets in today’s NoHo Historic District where, in 1857, the Blackwells founded the New York Infirmary for Indigent Women and Children.

The Blackwells’ Infirmary was the first hospital staffed entirely by women. Its staff and interns brought groundbreaking and much-needed medical help and hygienic guidance to the overcrowded tenements of the surrounding neighborhoods. We will explore the Blackwells’ legacy locally in the Infirmary building itself, and in much broader ways through the work of women in medicine and changes they wrought in the field of public health.

Janice P. Nimura received a Public Scholar Award from the National Endowment for the Humanities in support of her work on The Doctors Blackwell. Her previous book, Daughters of the Samurai: A Journey from East to West and Back, was a New York Times Notable book in 2015. Her essays and book reviews have appeared in the New York Times, the Washington Post, the Los Angeles Times, Smithsonian, The Rumpus, and LitHub, among other publications.

Vivian W. Pinn, MD was the first full-time Director of the Office of Research on Women’s Health (ORWH) from 1991-2011 at the National Institutes of Health (NIH) and NIH Associate Director for Research on Women’s Health. Prior to that, she was Professor and Chair of the Department of Pathology at Howard University College of Medicine, Associate Professor of Pathology and Assistant Dean of Student Affairs at Tufts University School of Medicine, and Teaching Fellow at Harvard Medical School. Through the ORWH, she led NIH efforts to implement and monitor the inclusion of women and minorities in clinical research funded by the NIH.  More recently, she focused on the importance of sex differences research across the spectrum from cellular to translational research and implementation into health care. Dr. Pinn also co-chaired The NIH Working Group on Women in Biomedical Careers. Read Dr. Pinn’s full biography here.