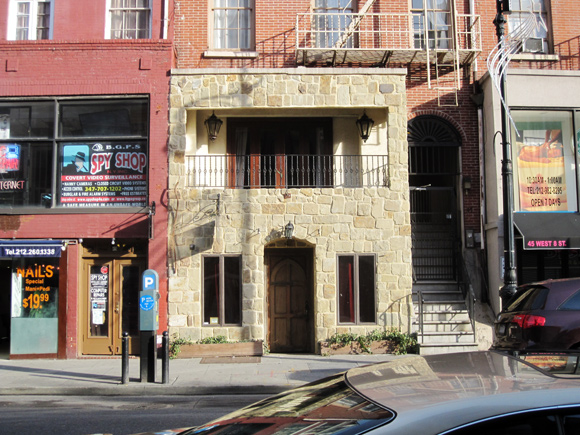 A Greek Revival style rowhouse built in 1845 and altered in the early 20th Century to accommodate stores at the first two floors. Application is to legalize facade alterations without Landmarks Preservation Commission permits and install new storefront infill.

PHOTOS OF THE APPLICATION:

1) Receive updates by email
Please click here if you would like Village Preservation to email you when there are updates to the status of this particular application.

Status as of January 25, 2012: LATEST NEWS
At the Landmarks Preservation Commission’s public hearing on Tuesday, January 24th, the Commission voted to deny the application.

Status as of January 18th, 2011:
The application was presented to the Community Board 2 Landmarks & Public Aesthetics Committee on Tuesday, January 17th. See above for photos.

Status as of January 5th, 2011:
This application is scheduled to be shown publicly for the first time at the Community Board 2 Landmarks & Public Aesthetics Committee public hearing on Tuesday, January 17th, 2012, at 6:30 pm in the NYU Silver Building, 32 Waverly Place, Room 208 (as this information is subject to change, please visit the Community Board’s website for the most up-to-date information). Public attendance and testimony are welcome.