In the early morning hours of April 15, 1912, the 883 foot long, 50 ton, and reputedly unsinkable ocean liner the RMS Titanic sunk on its maiden voyage from England to New York off the coast of Newfoundland, after hitting an iceberg just before midnight the night before. Of the 2,224 passengers and crew aboard, over 1,500 perished, making it one of the worst peacetime maritime disasters in history. It was the largest ship afloat at the time of its demise.

The impact of the disaster upon human life, shipping regulations, and the popular psyche cannot be underestimated.  The tragic event also had many important connections to the Village, many residents of which lost their lives on board.

The most direct connection between the Titanic and the Village is the Jane Hotel at 507 West Street, which was originally known as the American Seamen’s Friend Society Sailors’ Home and Institute, built in 1907-08. (As a designated New York City Landmark you can read more about the building’s history on our Resources page).

The Carpathia, the ship that rescued Titanic’s surviving passengers and crew, arrived at Pier 54 off Little West 12th Street on April 18th, 1912. The ship’s crew had been sequestered on the Lapland of the Red Star Line, but on April 19th a prayer service was held for them in the assembly room of the Seamen’s Institute. Writes the New York Times, the “company of 100 were of the Titanic’s crew, and they had come from their sequestration on the Lapland to attend these services, and to receive aid and comfort from the never-failing friends of theirs, who make up the staff of the institute.” The crew was able to change into new outfits, eat and sing though some “were just a little bit at odds with the world, so little attention had they received since they reached this port.” 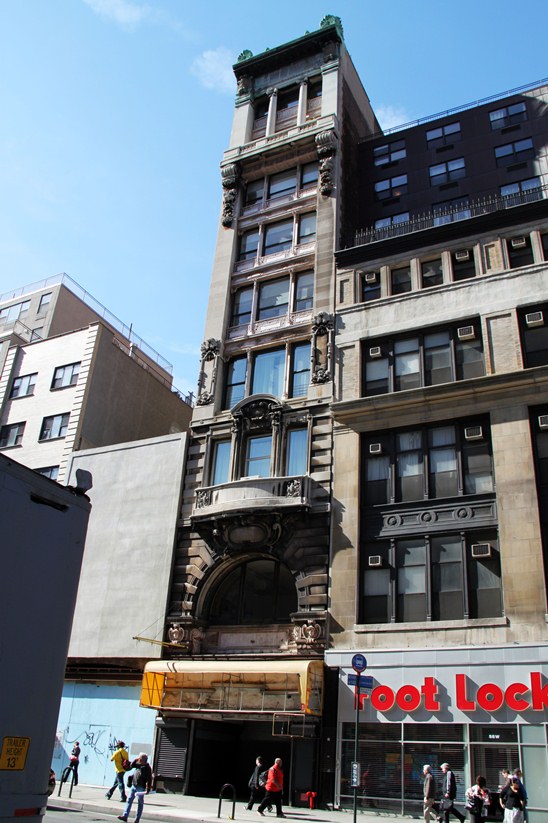 Another Titanic connection is the R.H. Macy & Co. Store, 14th Street Annex, which was designated a New York City Landmark in May 2011 (read our related Off the Grid post). Rowland H. Macy founded Macy’s in 1858, but by 1896 brothers Nathan and Isidor Straus held sole proprietorship. Soon after, they commissioned the building at 56 West 14th Street, completed in 1897.

Isidor and his wife Ida booked a trip on the Titanic after visiting their native Germany. It is reported that Ida had the opportunity to board a lifeboat, but would not do so without her husband. The couple was last seen sitting on deck chairs before perishing at sea. If you’ve seen the 1997 movie, Titanic, you may remember this couple as the elderly pair lying in bed as their room slowly filled with water (an ending changed for dramatic purposes).

If you’d like to learn more about the history of this building, you can read the designation report here.

One last indirect connection between the Titanic disaster and the Village is the ship’s most famous and wealthiest passenger: John Jacob Astor IV of the prominent Astor family of New York. Astor and his wife Madeleine were returning from Europe, though only Madeleine, carrying their unborn son, survived. In 1912, the Astors lived at 840 Fifth Avenue, but in the 19th century John Jacob Astor I owned a house on Lafayette Street in the area now known as NoHo. Astor Place was named for John Jacob Astor I after his death in 1848, and stretched from Broadway to Third Avenue just south of East 8th Street. The Astor Library and the Astor Opera House were also buildings connected to one of New York’s most elite families.

On the occasion of the 100th anniversary of the sinking of the Titanic in 2012, GVSHP held an event at the Jane Hotel with scholars and experts recounting the history of this fateful event.  Images from the event can be found here, and more information here.

One response to “Titanic Connections”