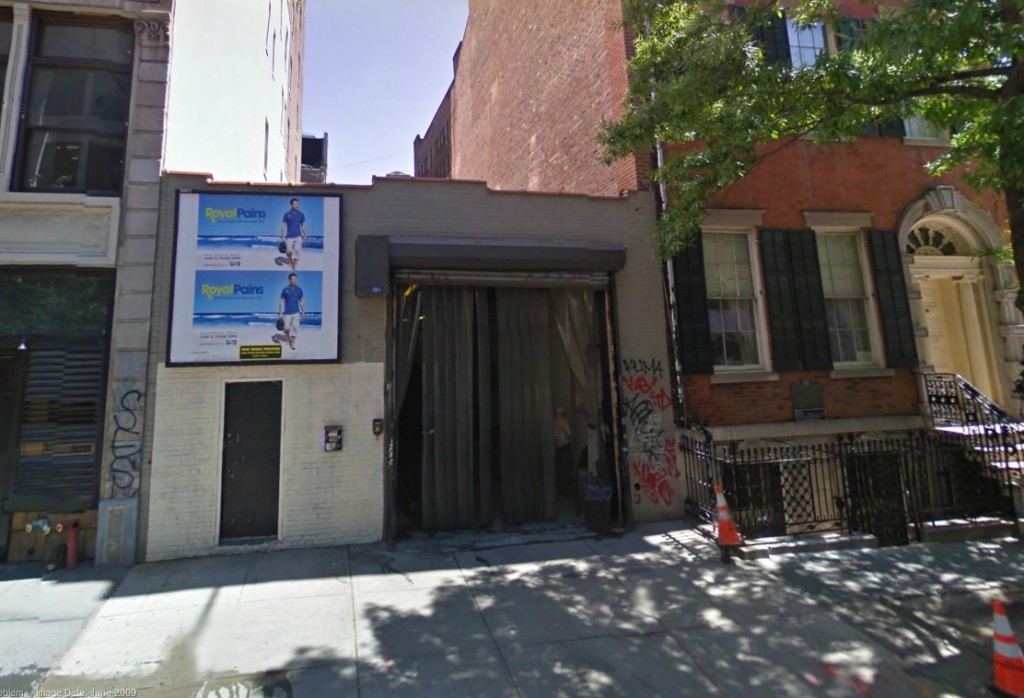 For a few months now, many of you have been following the proposal for a new nine-story hotel at 27 East 4th Street. The site, which currently holds a one-story garage, sits directly next to the Merchant’s House Museum, one of the few exterior and interior landmarks in the city. Because 27 East 4th Street is located in the NoHo Historic District Extension, the proposal must be reviewed by the Landmarks Preservation Commission.

The project is particularly sensitive due to its adjacency to the Merchant’s House; for unknown reasons it has had its public hearing delayed four times now. Read on about the ongoing issues for 27 East 4th Street and sign up for GVSHP e-alerts to receive notice when the status of this application changes!

The first Community Board 2 (CB2) Landmarks & Public Aesthetics Committee meeting was held on April 30th, after which a second meeting was held on May 14th. About 75 people showed up to that second meeting, including representatives of the Merchant’s House Museum, numerous local preservation advocacy groups, local residents, and concerned members of the public. GVSHP issued comments at both meetings. From the beginning, our primary concern for the 27 East 4th Street application is the impact of potential new construction to the fragile, 19th century Merchant’s House. However, we also feel that the design of the proposed structure is much too “Midtown” in feel with its plate glass facade and that its scale overwhelms the museum.

Owned by the Parks Department through the Historic House Trust, the museum has had damage to its interior plasterwork from adjacent construction work in the past. In following the progress of this application, there seemed to be a lack of communication between Parks, DOB and the LPC so we, along with the Historic Districts Council, sent a letter to the three agencies addressing that concern. You can read the LPC’s response here.

GVSHP also sent a letter to the LPC after discovering that no new building application was filed through the Department of Buildings. We’ve since received word from the LPC that, in this case, a variance is needed through the Board of Standards and Appeals instead of the standard DOB new building application. That means that CB2’s Land Use and Business Development Committee would have to hear this variance application before it is heard at BSA. Given that we have not yet seen that happen, and this is something we monitor, it could be awhile before the 27 East 4th Street application is heard at the LPC.

GVSHP attends all CB2 and CB3 Landmarks Committee meetings, so if you’re ever wondering about upcoming landmarks applications you can follow our Landmarks Applications Webpage. There we have dates for community board and LPC public hearings and meetings for all active applications (known as Certificate of Appropriateness [C of A] applications). You even have the option of signing up for GVSHP e-alerts for the application(s) of your choice!

To see more images of this application, please visit the 27 East 4th Street page on our Landmarks Application Webpage.

One response to “An Update on 27 East 4th Street”